Beaty won't say who will start at QB next week

The third start of his senior season began in similar fashion to the previous two weeks for Kansas quarterback Peyton Bender, with him watching from the sideline on occasion while backup Miles Kendrick took over for the offense.

However, unlike the past two games, Bender didn’t play at all after halftime Saturday in KU’s 55-14 drubbing of Rutgers.

All of the third-quarter snaps at QB went to Kendrick. Bender, in the first half, completed 8 of 12 passes for 73 yards, with no interceptions or sacks, but a few missed throws to open receivers.

According to head coach David Beaty, KU (2-1) didn’t play Bender in the second half because of something the coaches saw in Rutgers’ defensive structure. The packages KU had in place for Kendrick, a dual-threat sophomore, Beaty said, fit in well.

“And he had a pretty good command of it from what we saw from the sidelines,” Beaty said of Kendrick’s first half. “So it really worked out that way.” 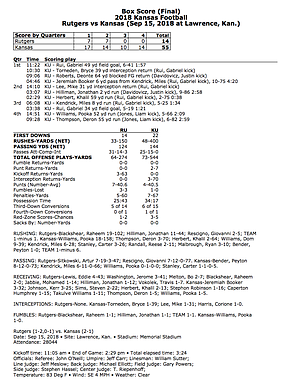 The sophomore completed 6 of 11 throws for 66 yards and a touchdown, while also rushing for 28 yards on six carries with one TD in the victory.

“We were about to put Peyton back in there, because we had a lot of time left in the fourth quarter, and then that next drive on the defense it took a little while and we just felt like it was time to get, from an injury perspective, moving into the next phase, we felt like we had to, we felt like we had the game in control,” Beaty said of going to another backup, Carter Stanley, in the fourth quarter. “We wanted to make sure that we got some other guys in the game and kept those guys healthy.”

Asked whether Bender would remain KU’s starter for a Week 4 trip to Baylor, Beaty declined to answer.

“The good news is we have got several of them that we can use and I'm not going to announce the starter right now just because I don't know that I want to give Baylor an advantage,” KU’s fourth-year head coach said. “I think that we can use all of them. We just need to get a good look at the tape and see what it behooves to us use.”

Wise limped off the field on his own. He attempted to play in the third quarter, but moved slowly and returned to the bench after one snap. 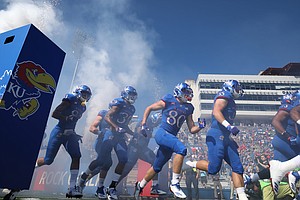 Fellow captain and redshirt senior Joe Dineen said when he asked Wise about getting banged up the lineman told him he was “fine.”

Wise was credited with one tackle for loss and a QB hurry in the win.

A native of Wichita, Blazek’s father, John, now lives in Lawrence and serves on the Parks and Recreation Advisory Board. But the RU assistant had more than family in the stands to support him. Blazek, whose college football playing days began at Butler Community College, in El Dorado, told NJ.com earlier this week he expected to have more than 40 people he knows at the game.

“The O-line I played with in junior college, they're all coming up,” Blazek said. “My O-line coach. It's going to be fun to go out and keep doing football with those guys around, see them afterwards and chat for a little bit. Old players are coming from (Fort) Hays, my first job."

Following an All-American and Academic All-American career at Butler, Blazek was a two-year letterwinner at center at Iowa, where he earned All-Big Ten Conference honors in 2000 and was a co-captain during that 2000 season.

Blazek is in his third season as offensive line coach and second season as assistant head coach for the Scarlet Knights. He is friends with KU defensive coordinator Clint Bowen.

“This is home,” Blazek told NJ.com earlier this week, ahead of the trip to Kansas.

Rutgers, “The Birthplace of College Football,” is in its 149th season of competition since 1869. The program has played the most games in the history of the sport (1,340).

• KU freshman running back Pooka Williams is the first running back in program history to record back-to-back 100-yard rushing performances to start his career. He totaled 158 yards in his second game as a Jayhawk.

Not sure what to think about Bender. He seems poised but misses his targets quite a bit. I think it would help him get over the initial adrenaline rush by having him run a little. Bringing in Kendrick seemed like the right thing to do.

Pick a QB and play em. And not Bender.

Miles isn't ready yet. I get the sense that they think he will be, but he's only played part of one season of JC ball. He needs time. I really wondered about it the first week when it seemed to disrupt a rhythm Bender was getting in when Miles entered the game, and his performance was pretty underwhelming in that game and last week.

What a luxury for Miles to be able to grow behind a senior starter. If he continues to grow in ability and confidence, it would be an extremely wise move - not that the coaching staff has any clue what good coaching looks like.

RE: "Miles isn't ready....I get the sense that they think he will be...He needs time...If he continues to grow in ability and confidence, it would be an extremely wise move - not that the coaching staff has any clue what good coaching looks like."

You were the same one cautioning me under another thread about not looking to the future, and then THIS. Your advice was to "live in the moment".

I assume from judging by this comment you've found the Light: namely, that looking to the future is the only way to move forward.

Rationality for the WIN!

The shuffling in and out of quarterbacks isn't Coach Beatty being a great tactician, it's him being indecisive and over thinking it. If it was such a great strategy, why did nearly all of the Div. 1 teams use just one quarterback yesterday (except the blow-out cases)?

"he seems poised but misses his targets quite a bit".....uhhhh, he was 8/12 with no interceptions.

I just don't understand the hatred towards Bender. Stick with a quarterback and quit with all the shuffling and indecision.

Newsflash: Meacham is the offensive coordinator and makes the offensive decisions. Save your comments for Meacham. He's the one putting the QB in the game.

LOL - oh forgive me. I forgot that Beatty was sitting on the sidelines eating bon-bons.

Many colleges use a “wildcat package”. This week and last week, the minute Kendrick came in, the other team had to burn a timeout. I like the idea of a wildcat package. With that said, I agree to find a starter and stick with them for the majority of the game. Our offense line has to adapt to a quarterback, because of their unique strengths, just as much as the defense does.

I watched a YouTube from the Rutgers perspective I thought was interesting. The two announcers were talking about continuing to play their QB even after his dismal performance for the sake of the future. How well did we stick with that plan? Crist, Heaps? Our problem is not getting a guy like that as a freshman. We need to go out and recruit a five year QB, a 4 year starter. Our problem is they have all been transfers...the highly.touted ones.

We ripped CMU and Rutgers because they were first year QBs. Experienced ones won't be so generous.

This is for the future. Question is does this coach have one. We don't know. My.belief is now we are beyond that point and should rotate to give us our best chance to win.

I am feeling cautiously optimistic like the season we destroyed Rhode island and won 2 of 3 nonconference games. The key to the future is how we do in conference play. If we win a couple, are competitive, i think we will stay the course. Every game is huge. If we are competitive but don't give Beaty more time that could be a mistake. If we regress it would be a mistake to keep him. I now believe the entire season will have to play out.

I would like to see us play K-state earlier in the year. That would be to our advantage.

In a sense I can understand why there would be some indecisiveness in choosing the full time QB. Having watched the games they each have their own unique strengths and weaknesses but neither really seem to do enough to separate themselves from each other. Bender has thrown the ball well for the most part, moved the chains and limited turnovers but Kendrick seems to have more of the total package with less accuracy. I personally like the way the situation is being handle; it forces the other teams to adjust when you don't know who is coming out for the next series. Even the fan base seems split on who should pay. I say keep it going until someone is clearly the better option.

Not saying this is going to happen at KU but, in 2006 Florida played two quarterbacks... and won a national championship. The running half of that QB duo was none other than Tim Tebow. The next year, Tebow won the Heisman after having an incredible season both passing and running, as a sophomore. Also, Tebow flirted with becoming only the second two-time Heisman winner after Archie Griffin (coming in third and fifth in voting the next two years), and won another national championship in his junior year.