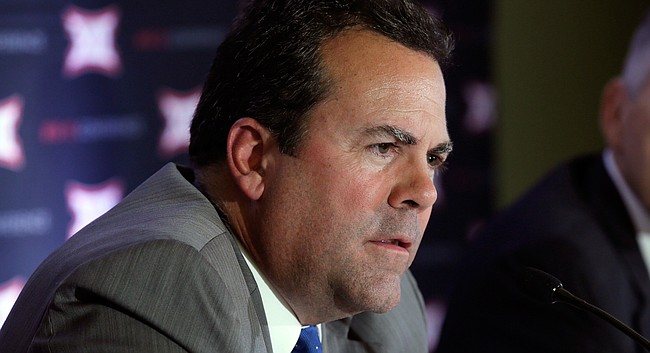 On Friday, Zenger told the Lawrence Journal-World that he plans to join the coaching staff for the Free State football team. Zenger will serve as a linebackers coach for the Firebirds, who made it to the 6A quarterfinals last fall.

Zenger was fired on May 21 after spending seven years as the program’s athletic director. KU has yet to announce a replacement.

But Zenger’s new gig appears to be an opportunity he couldn’t pass up. He will be one of nine assistants under Free State head coach Bob Lisher. Zenger, who officially made the decision this week, plans to coach at FSHS for just one season.

Zenger will also get to witness his son’s final preps campaign from the sideline. Jake Zenger plays tight end and slot receiver for the Firebirds, and he also pitches for the baseball team in the spring.

“Nothing is more important than your family,” Zenger said. “I obviously won’t be coaching his position, nor would I want to. To be in the locker room with him, and the other guys and coaches, is just really special. To be present for that is something that gives me chills.”

Zenger began his career in coaching, serving as an assistant for the Manhattan High football team in 1987. Zenger, who graduated from Kansas State in 1988, joined Bill Snyder’s staff in 1989. He eventually moved up to director of football operations and served in that capacity until May 1992.

In addition, he was an assistant football coach at the University of Wyoming for three years where he held multiple roles as an assistant head coach, recruiting coordinator and running back coach.

“I’m extremely excited for him,” Lisher said. “He’s a very good football coach; he’s coached high school football and college football. It’s an opportunity for him to get out of the high-pressure job in college athletics a little bit and enjoy his son’s senior year. I think it is a win-win situation for everybody.”

Yet Lisher still has bragging rights on his new assistant, as the two of them squared off in 1987. At the time, Lisher was an assistant at Lawrence High when LHS bested Manhattan with a 17-16 victory and captured the 6A state title.

“He will be very valuable,” Lisher said. “The thing I can always hang over his head, though, is beating him in the state championship game. I’ll always have that power over him.”

What a great opportunity for all.

Exactly!. And what a bunch of id's on here for criticizing Zenger for doing it.

I coached my two sons and daughter in little league baseball and both indoor and outdoor soccer. Now they are grown....and those times in my life spent with my kids are the greatest memories I have.

I'm sure that whatever he gets paid by Free State will be a pittance compared to his KU salary, but does anyone know if KU will get an offset from his his buyout for the amount Free State will be paying him? I realize probably not and also that any recovery KU might make would be very small, but I'm just curious.

I agree with Dirk and Gary. I recall many fans mentioning "Family Over Everything." Here's a guy who could make a lot more money elsewhere, but wants to spend time with his son while he can. I admire that.

He is making a lot of money...while he is on paid vacation! Must be great to have that luxury after failing tremendously to accomplish what he was tasked with doing!

Where the H is Free State?

Founded in 97 in Lawrence. Long after I left.

Off of 6th St. on the west side of Lawrence.

Why is it absurd for someone to follow his heart? He obviously knows that some will mock him for the decision. However, I have nothing but praise and admiration for him.

All the best to him and his family.

He wasn't a great AD but that doesn't mean anything about what type a guy Zenger is or his reasons.

Not a great AD but not a bad one either. He’s done a lot in the facilities department and in the area of academics.

No news here. Don't see anything that makes me think less or think more of him. I wish him the best despite being relieved that he is not going to be hiring another football coach.

What is Bob Lisher thinking? I wouldn't let this guy come within 100 miles of any athletic program - college, junior college, high school, or even middle school!