Morgantown, W.V. — In the wake of another fall-from-ahead loss to Kansas, veteran West Virginia basketball coach Bob Huggins talked about more than the lack of productive passing and waning defensive pressure that were factors in allowing it to happen.

As usual, Huggins probed deeper while talking about his team and, in the process, without mentioning Kansas, shined a light on one advantage the Jayhawks bring in pursuit of a 14th consecutive Big 12 regular-season title.

“I think this,” Huggins said. “You ever heard the story of the guy playing golf and he’s a guy who shoots 90 most of the time? So he goes out and shoots 37 on the front. What does he say? He says, ‘This isn’t like me. I don’t know what this is, but this ain’t like me.’ And he shoots a 59 on the back and he says, ‘See, I told you. This is more like me.’ He’s comfortable shooting a 59. He’s not comfortable shooting a 37.”

West Virginia entered last week ranked No. 2 in the nation, survived a home game against Baylor, 57-54, lost by a point at Texas Tech, dropped to No. 6 and then blew a 12-point lead in the final eight and a half minutes Monday in losing to KU, 71-66.

“We probably weren’t very comfortable being No. 2 in the country,” Huggins said. “I told them in practice just the other day, 'Look up at that crow’s nest up there. What do you think of that?' They said, ‘That’s pretty high.’ I said, ‘Well, that’s kind of where you are. You’re one rung away from the top. It’s not so hard to climb up there. Boy, that fall’s a (bear). That fall is hard.' I told them that’s about what we’re getting ready to do. Our preparation wasn’t what it needed to be.”

All basketball teams whose fortunes ride on men ranging in age from 18 to 23 will have stretches, good and bad, throughout a five-month season.

But unlike what Huggins articulated what has happened with his team, for Kansas, the view from the top never will bring on vertigo. The Jayhawks' comfort zone can be found in the penthouse because it's were they spend most of their time. They don't feel comfortable elsewhere, so when they slip, they scramble with urgency to return to comfort.

Tangible flaws could undo Kansas, but intangibles such as self-doubt won't slay the Jayhawks. They can't relate in any way to Groucho Marx, who famously said, "I don’t want to belong to any club that would have me as a member.”

They always feel they belong in the champions club. 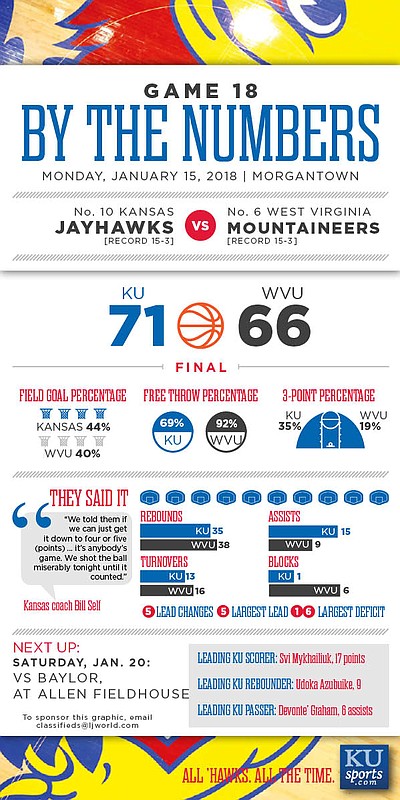 Tom's writing his own story about the guy who has all the shots and shoots 37 on the front nine but finishes with a 95!!!!

The thing with the Big XII is that just about any team from top to bottom can and does, beat any other team in the conference. That one point win over K State the other day looks a lot better after they just put an 18 point licking on the Sooners. The key for KU has been for the past 13 years winning the games they are supposed to. WVU let one get away, and that in the long run, will be their issue winning the Big XII. OU loosing to the Wildcats tonight wasn't a game they were supposed to lose. Maybe the Jayhawks are only comfortable with the view from the top, and that's what has kept the streak alive.

They even played the third string.

Tre, POTY? Young even had as many TO's as the KSU team. Nasty way to get a double double.

Could the skies at the penthouse be clearing?

OU goes down as Young plays like a freshman. KSU got what they wanted inside down the stretch.

Not mid season for the conference quite yet but it is mid season overall. Where is Billy and the NCAA? Jimi Hendrix sings "I'm a Limbo Child."

Don't know where Young will go from here but his out of control play is astonishing. 166 dimes to go with 88 TO's with a sizeable chunk of the TO's in the last two weeks. Kruger promised him complete control so it's on both of them right now.

DeVonte is at 131 and 50. Not a great dime to turnover percentage but not a soul killer like Trae's has been.

Both are still on my Big 12 first team along with contenders like Dean Wade, Manu Lecomte, Kenrich Williams, Keenen Evans and Jevon Carter. The big guys are so dime a dozen that just pick one or two. Not too late for Svi and Udoka either.

Beating OU and an over amped Manek and Young at home will be a tall task. We will have to match them shot for shot and get some points off turnovers. Udoka is our match up problem for the rest of the league so how he goes so likely will we.

Billy Preston will probably join the team after a 9 conference game suspension. February will be a tough month for Self getting the new bigs to play together with the rest of the team.

God, I hope it doesnt take until the 9th conference game for Preston to get cleared..he wouldnt even be a one and done..more like a 17 games (maximum) and done..now if in those dozen or so games he helps lead KU to a Nation Championship, then I wont have any qualms about him leaving after playing so few games...this off season will be interesting for KU..Azibuike, while improving, might be better staying another year and Preston may either feel the need to stay or this whole experience might make him feel he has to leave..if I were him, I wouldnt come back after all this mess...if either one comes back, that would give KU 4 talented bigs to turn to

One third of the way through the conference and Kansas has but one loss. That's impressive, especially given the fact that Kansas has already played - and won - two of its toughest road tests.

Next three conference games are huge. Must win at home v. Baylor then road games @ OU and @ K-State. If KU can go win two of those three, I don't see how KU doesn't win at least a share of the conference.

It is the stretch after the 3 Joe mentions that are crucial to me.

I wasn't impressed with OU though that is the first I've seen. We need to win at home but I think we'll get them there as well.

Take em one at a time, guys. You can bet that is Coach Self's approach. That's another reason why KU is comfortable at the top. They expect to be there, and that is a key part of success - - you know, the old "visualization" method.

By the way, I like the banter between Suzi and Tom Keegan regarding golf. It's a sport that teaches a lot of life lessons, as the spotlight is always on the individual. Nobody to blame but yourself if things don't go right.

Thanks Tom for focusing on more than just the "X's and O's".

YYYYYYYYYYYEEEEEEEESSSSSSSSSSSS..how much longer does the kid have to sit for christ sake..we are literally done with half the season

The Louisville recruit that was caught up in the scandal has already made arrangements to transfer and requested reinstatement by the NCAA. Since Billy hasn't made such a move I assume and hope he intends to ride this out and that his infraction is not as egregious. Surely the NCAA will find time this week, in their busy schedule, to make a decision on Billy's fate. Surely his situation is not so complicated as to require additional investigation.

And then there was one with 1.

Obviously, there is a lot of BB left to be played, but this is why having a tough conference actually works out in our favor. The other teams are all good enough to catch each other, and we have the best coach that gets just enough out of the best players.

It would seem to me that all the self-imposed suspensions work out for our favor as well. Those freshmen bigs aren't hitting any walls, and have all kinds of motivation. Billy will be freed eventually, and will push us over the top in the end.