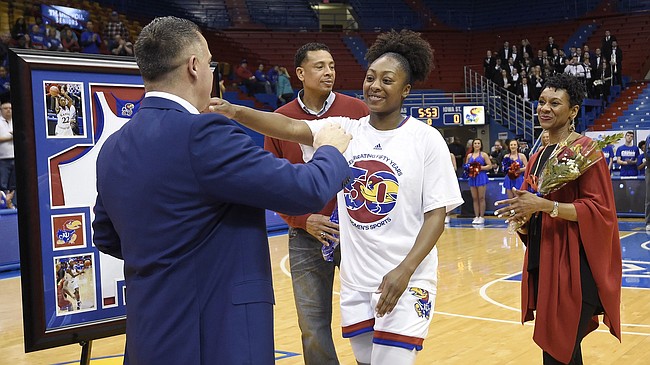 The Kansas women’s basketball team had a promising first half on Senior Night against Iowa State.

But in the closing half, the shots rarely fell through the hoop.

“Tonight, especially in the second half, it’s about knocking down shots, and, unfortunately, we weren’t able to do that,” said KU coach Brandon Schneider after the game. “We just couldn’t get enough of them to go down.”

Schneider said he was initially pleased with the offensive output he saw from his group in a first half in which the Jayhawks shot 13 of 26 (50 percent), carrying a 35-31 lead into halftime.

Tyler Johnson was a key contributor in the Jayhawks’ early lead. The 6-foot-2 forward established herself early in the paint and scored 13 points on 5 of 6 shooting in the first half.

Johnson’s aggressive play against Iowa State’s frontcourt also helped her get to the free-throw line and make 3 of 4 shots from the stripe.

“I thought our guys did a really good job in the first half of playing inside through Tyler,” Schneider said.

But Johnson’s offensive production — along with that of the rest of team — went dry in the second half.

In the third, KU (12-17, 3-15 in Big 12) was mired in an offensive slump for most of the period. The Jayhawks at one point committed four turnovers in a scoring drought that lasted more than five minutes. The drought also allowed Iowa State to reel off a 13-2 run and take a 6-point lead into the fourth.

The Cyclones had made some defensive adjustments on Johnson, and Schneider recognized it.

“For the most part, we were able to get it to her with one-on-one coverage,” Schneider said of Johnson, who scored just 2 points in the second half and finished with 15. “After she made a few, they started bringing some heat with some double teams.”

The double teams on Johnson opened up the floor for the Jayhawks, but they couldn’t capitalize. Austin Richardson, Brianna Osorio and Christalah Lyons combined to shoot 11 of 34, and Kylee Kopatich — known for her sharpshooting — didn’t attempt a 3-pointer on the night.

“We had some guys that typically make baskets, or provide us with offense, that just didn’t quite get it done,” Schneider said.

As for the senior group of Chayla Cheadle, Eboni Watts and Sydney Benoit, the loss was a disappointing end to their home careers.

“I’m very sad, honestly,” said Benoit, who had two assists and a block. “I feel like time has flown by so fast. I’ve been here for three years, but it’s gone in a blink of the eye.”

Cheadle and Benoit both agreed that KU’s upset win over then-No. 25 Oklahoma State last week will remain one of their favorite moments.

“Or, back in my freshman year, when we upset (California),” said Cheadle, who scored three points and grabbed five rebounds against Iowa State. “To know this is my last time playing in Allen Fieldhouse is kind of emotional.”

The Jayhawks will now prepare for the Big 12 Championship, which begins Friday. KU will open up against K-State at Chesapeake Energy Arena in Oklahoma City.

“They’re shooting the ball really well,” said Schneider of K-State, who has won its last two games. “It will be important for us to find a way to disrupt a little bit of rhythm there.”

Have any of the coaches hired by Zenger in any sport been successful?

Give the school and coaches credit, Mens team 14 consecutive years of championships and excellence. Womens basketball team 30 consecutive years of the worst basketball possible. Not the fault of the team, they don't have the talent to play at this level. Its the fault of the AD, Coaches and School President for allowing this to continue and not demanding more from this program. Coach makes a million per year and has no accountability or stress, must be a good gig.

The Jayhawk women went to three straight Sweet 16s, just before Zenger changed coaches. Although, I'm not saying we should have kept that coach, I'm not sure this coach has done nearly as well.

But wait, didn't you hear the excuse? They lost their best player before the season -- so THAT caused them to be awful for 3 seasons. What a joke. HIRE BONNIE BACK!

Women's team played well in pre-conference. But like during Bonnie's years couldn't carry the wins into conference play. Schiender is starting to recruit his type of players. Let's see what happens next season.

But she did do well in the tournament.

As badly as Zenger has botched the football coach hires/fires, I think that Schneider has earned a little room for trust, based on the fact that he came in as a proven winner. I think that he's made a couple of roster errors, but he's an experienced coach, he's won at a lower level and he might still turn the corner.

Besides, if you fire him now, you have the same AD in charge of the hiring.

If only Zenger had shown some intelligence and hired a football coach with even a minimal resume, then the KU fan base would have granted him a little bigger grace period. The Beaty hire may be the worst hire in KU athletics history. Second, probably, to the Weis hire.

The Weis hire was a calculated gamble, there were others that were really interested in the role that really would have been a different gamble.

Beaty is by far worse than Weis' hire. He was the high school successful coach and had been showing progress as a position coach. He basically could be hired with the anticipation to keep Bowen around. The Beaty/Bowen combination might go down as the worse tenure in KU history.

We’re barely inching along in women’s basketball; the cupboard was bare as bare could be when Schneider took over; but he tried the transfer route and it’s been a disaster. KU women’s b-ball was darn tough and had plenty of athletes for years under Marian; but she stayed too long and KSU’s new coach blew her away in recruiting KS kids, and that was all she wrote. Lew brought in Bonnie who was decent at the A10 level; but you throw out a gal who blew both her knees and still made all the plays at point guard in Angel Goodrich, and there would have been no record to speak of for her. We haven’t had a winning league record in 20 years; we’re 4-20 vs ISU-KSU combined the last six years; we have to start beating our peer schools. He gets one more year, but that’s it. Substantial progress next year with Jessica and Kopatich and Lyons coming back; 8 league wins with wins over KSU and ISU, or bust. How about an upset over KSU Friday?

I'm assuming that Zenger is working on the extension of his contract...probably 5 years. Since people were disappointed with Beaty in doubling his salary, I'm assuming that Zenger will put it at about 2.5 times his current salary. Don't worry he'll add incentives to even beef it up more, but don't worry Zenger doesn't actually expect any of his coaches to actually earn any of those incentives.