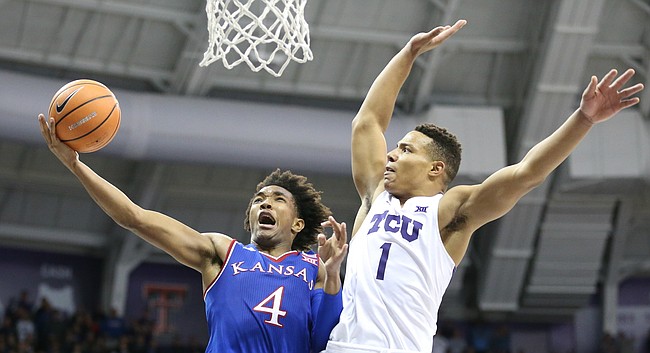 While Mitch Lightfoot's addition to KU's starting lineup was certainly an indictment on the recent play of Lagerald Vick, it also could prove to be a wake-up call for sophomore center Udoka Azubuike.

KU coach Bill Self said Azubuike needed to bring more tenacity and fire to the floor, particularly on the glass, and said he put Lightfoot into the lineup in part because it might inspire Azubuike to try to match Lightfoot's effort.

Azubuike has only played more than 30 minutes twice in Big 12 play (34 against Baylor and 32 in Game 1 against Kansas State) and only topped 30 minutes once in non-conference play (34 minutes against Kentucky).

In the first meeting with the Horned Frogs, Azubuike played just 13 minutes and finished with 14 points — 10 in the first five minutes of the game — and one rebound while fouling out.

Foul trouble — and more to the point, committing silly fouls — still plagues Azubuike and the Jayhawks are looking for that one game where he can avoid fouls being a factor and can just play with the kind of reckless abandon the Jayhawks need from their biggest player and best enforcer.

No better time to get going than after the team's worst rebounding game of the season.

This one seems foolish to even point out given the fact that 38 percent of KU's points — and 42 percent of KU's shot attempts — have come from 3-point range this season.

But it is particularly big in this one given how these two teams rely on and defend the outside shot differently.

Meanwhile, KU ranks third in the Big 12 in 3-point percentage (.392) and will be facing a TCU squad that is dead last among Big 12 teams in defending the 3-point shot, giving up .431 percent shooting to opponents.

What makes that last stat most interesting is the fact that this is a matchup of the Big 12 team that shoots the most 3-pointers per game (Kansas at 26 per game) against the team (TCU) that gives up the third fewest 3-point attempts per game (21).

A gifted and creative scorer from all spots on the floor, 6-foot-10 forward Vlad Brodziansky figures to be a focal point for the Kansas defense and Azubuike in this one.

In last season's upset of KU in the Big 12 tournament, Brodziansky led TCU with 20 points and so often got whatever he wanted whenever he wanted.

Forcing him to score in areas he is uncomfortable and out of the flow of TCU's offense is key with Brodziansky and doing that can knock the entire Horned Frogs' offense out of rhythm.

In the first meeting, Williams had a quiet first half before putting his finger prints all over the second half to finish with 11 points, 11 rebounds and five assists in 32 minutes.

KU coach Bill Self called him the best player in the game, whom the Jayhawks could not guard, and Williams a big reason that TCU stormed back from multiple double-digit deficits and nearly knocked off the Jayhawks.

Look for Williams, who is as talented as any individual player in the conference, to make a point of finding his rhythm much earlier in this one. If the Jayhawks are not up to the task of matching his effort and intensity, the TCU senior could put up big numbers and deliver another long day for the home day.

It's hard to know exactly how Kansas will guard him, but Mykhailiuk, Marcus Garrett, Vick, when he's in, and even Lightfoot for a handful of possessions, all are likely to get a turn.

You can look at all of the stats and matchups you want, but very few games feature such a clear and obvious key as this one.

The bottom line is this: If Kansas does not bring better effort, energy, intensity, tenacity, hunger, fire, anger, etc. — basically, all of the traits Self called into question during Monday's meeting with the media — it's hard to imagine this one going well or anyone on the home team emerging from the game with much to smile about.

Self said after the loss to Oklahoma State last week that part of this team's struggles were his fault because he had allowed the team to be “so soft.”

Shaking up the lineup, publicly calling out a couple of starters and key players and pushing all kinds of buttons in the ensuing days — and that's just what we know about — certainly seems like Self doing his part to change the tone. The rest is up to his players to respond.

TCU, though certainly talented enough to give Kansas a serious run, is searching for its first road win over a ranked team since the 1998 season and enters this one as a 7.5-point underdog in the eyes of Las Vegas.

The date in the photo caption is strange.

Well, Bill, it's about time Vick gets a sit down/wake up call!! Hopefully this will bring back the dynamic player he showed us at the beginning of the season.

im not sure he will return to that player..Vick has limitation in his game, namely his ball handling skills. He is sloppy with the ball at times and that makes it hard to drive to the rim...He can get better, but I wouldnt count on a vast improvement in his driving ability this season..Thank God Newman found his game again because this team would be in trouble with he and Vick were playing like crap

Vick doesn’t need a wake up call. He has been at Kansas for three years. Apparently, he is slow to learn...

I think if I was Self I would put an exclamation mark and first sub in game for guards be Sam. Get Sam some confidence on the court.

Did I miss the part where Newman got benched for Garrett (probable starters)?

Nope. Mistake. Grabbed the starters from the last TCU game and Garrett did start that one. He's not starting tonight. At least not that we've been told. Sorry for the mix up.

Kenrich Williams is the best pound per pound rebounder in the conference. He has the knack of knowing to where trey misses carom.

Come on Mitch play hard and you will get all the playing time you need to get comfortable. He was a three star recruit and hasn't had a chance to blossom.

this would be a great game to see Self play 2 bigs at once..maybe with DeSousa playing along side Azibuike or lightfoot he might look more comfortable

this is a dangerous game though..TCU really needs this game..they have been sliding for a few weeks now

I agree. But then, every game this season has been a dangerous game, with some more than others.

Jamie "Texas Toast" Dixon will be Popping up and down and Storming the Court! 6th Man of the Year Award! Jamie also needs to learn how to part his hair!

I sure hope the Jayhawks are more pumped to play after a sluggish performance at the 120 year celebration! Hard to believe they failed to get up for that one! Rock Chalk!

Big thing that needs to happen: Kansas needs to show some pride in defending Allen Fieldhouse. There has been so little of that since the loss to ASU in December. If I wasn't living in Iowa and had tickets to Allen Fieldhouse, I'd be seriously considering not attending this TCU game. If the players don't care enough to play well in the Phog, why should I care enough to go and support them?

In 1988, when KU lost back-to-back games at home to Kansas State and Oklahoma, the fans responded by not filling the Fieldhouse for the next home game against Colorado (only 14,100 showed up - at a time when AFH's capacity was 15,800). Maybe the fans need to send a message to the players by staying away from the Phog until the players show that they care enough to defend home court.