It wasn’t always the prettiest showing, but No. 2 Kansas found a way to survive once again.

KU (8-0) struggled for much of its non-conference clash with New Mexico State Saturday night in the Sprint Center. Just like they have done a number of times during the young season, though, the Jayhawks made enough plays down the stretch to claim a 63-60 victory.

Junior Dedric Lawson scored 11 consecutive points for Kansas during a three-minute stretch late in the contest to help deny the upset-bid by NMSU. Lawson finished with 20 points on 8-of-15 shooting in the win. 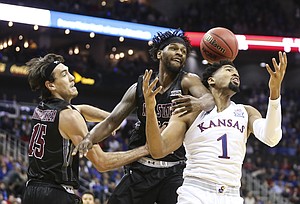 With the win, the Jayhawks are 8-0 to start the year for the first time since the 2010-11 team opened the season with an 18-0 record. In addition, KU is now 39-9 in games played inside Sprint Center.

• The game turned when: Lawson drilled a go-ahead triple with 3:23 left in the game.

The 3-pointer capped an 11-point run by Lawson, which took place between the 6:40 mark and the 3:23 mark in the second half. The stretch by Lawson gave KU a 60-57 advantage late in the game after New Mexico State had led for much of the contest.

Meanwhile, prior to that stretch, Lawson had just six points in the first 34-plus minutes of action.

• Offensive highlight: KU coach Bill Self remains the best in sets after a timeout.

With 15:02 left in the game, Self drew up something to get a dunk. Even without starting center Udoka Azubuike, who is sidelined indefinitely with an ankle sprain, Self called a set to get a slam by his post. 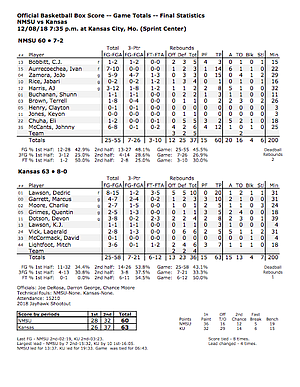 Mitch Lightfoot, the team’s center at the time, was wide open near the rim when senior Lagerald Vick threaded a pass his way. Lightfoot capitalized with a slam, bringing KU within five points. The two linked up for a fastbreak slam with 12:01 left in the contest, which received the loudest cheer from the crowd at that point.

• Defensive highlight: It was all Kansas early on in the Sprint Center.

Charlie Moore, who got his first start of the season, displayed a ton of energy early on for the Jayhawks. Leading by eight points, Moore swiped the ball away from a driving New Mexico State player.

Moore wasted no time, heading to the other end before flipping a no-look pass behind him to a trailing Marcus Garrett, who flushed the transition slam home.

Charlie Moore with the steal and dish back to Marcus Garrett, who finished the sequence off with a dunk #KUbball pic.twitter.com/DxDfjpxpVq

•Key stat: Vick was lighting the world on fire during a five-game stretch of where he seemingly couldn’t miss.

Since his heroics against Stanford, which included a game-tying triple at the end of the regulation, Vick had been a non-factor. Vick came off the bench in each of the last two games as well.

With 11:25 left in the game, Vick had a layup in transition that ended his longest scoring drought of the season. Prior to his layup, Vick had not scored since netting a 3-pointer with 2:22 left in overtime against Stanford. In fact, Vick had played 44 minutes between baskets.

•Up next: Kansas plays host to Villanova at 11 a.m. Saturday.

Holy crap, how many times are the Jayhawks going to tempt fate before fate bites them in the @$$? I'm only 31; but if the Jayhawks keep playing like this, I may have to invest in a pacemaker!

Clearly they have not found their rhythm yet.

Two years ago I had an airplane ticket and was all set to fly from Maryland to see the KU-West VA game at Allen Fieldhouse. I found out on Thursday of the week before the game that I was going to get a pacemaker on Monday, the same day of the game. That was the game in which KU came back from a 12 point deficit with less that 2 minutes to go. So instead of sitting in the rafters in Allen Fieldhouse that night I was lying in my hospital bed at Johns Hopkins Hospital in Baltimore recovering from a pacemaker surgery. During that wild last two minutes of the game I was yelling and cheering at the TV while my wife was watching the heart monitor equipment that was hooked up to me. It was a great test for the new pacemaker. The Jayhawks have tested it many times since.

OMG Jim, I'm surprised the doctors let you watch it. That was an epic game. When I total the teams accomplishments at the end of the season, that was on the list. Glad you were able to see it and more importantly survive the experience.

Vick is still drawing defenses off everyone else. Good luck scouting Kansas with or without Vick and Dok. When you are deep you use different options.

Vegas line, single digit spread, make easy money on KU. Good win! Dedric carried us this time. Mr. Double-double gets hot late. TO# is still bad, asst# has got to improve with 4-guards play or whatever (weird thing, we have yet to see good number of assists/TO). Lightfoot, Garrett have to continue jamming. Grimes and other guards need to be reminded playing (cough) high-low - never pass inbound when there are 2-3 defenders surrounding the post. Vick has to find ways keep taking the ball inside or delivering those nice passes, not just depending on 3s.

Glad you mentioned Mitch Lightfoot. By my count, he drew two critical charges on NM State in the second half. I love it when guys like him do things to help the team win that don't show up on the stat sheet.

Mitch has all the tools to be another offense weapon, not just great defense help - yep, his signature D-charge. Guards just have to find him, like Vick did today. fastbreaks, pick and rolls.

Mitch was the player of the game in my opinion. His energy and experience was evident to me. It looked like D. Lawson was coming in for Mitch when he was throwing free throws and I was yelling at the tv, "Keep Mitch in the game." Coach must have thought so too because someone else came out of the game and Mitch stayed in. He was the spark on defense that slowed up some of the inside scoring from NM State.

If you are the NMSU coach you could argue they lost this game on the line. Only 3 for 10 from a team that shoots 70 percent. Good thing they didn't shoot their average tonight.

1] Who was the idiot of insisted that Mitch red shirt this season......oh, it was me!

2] Please tell the Kansas Jrayhawks that they are allowed to play like the number 2 team in America in BOTH HALVES!!!

3] If Gonzaga loses to Tennessee at Tennessee on Sunday, I have no doubt that Duke will jump over us for #1.

4] Speaking of Gonzaga, when I type their school name into a comment, the spell check always comes on. Shouldn't that be considered a kind of an insult? :}.

5] Where all the lights turned on in the Center? It looked like a lot of people had shooting issues.

6] Rumor out of Lawrence is that if Silvio does not have some resolution of his eligibility before the start of the second semester and Big 12 play, he will leave and prepare for the draft and play in Europe.

7] Is it time to panic a little about the foul shooting, especially since Dok didn't step up to the foul line even once last night!!!

8] When did Marcus go out and learn how to shoot three point jumpesr!!!???

Great commentary as always Tony. I’ll be watching the Gonzaga-Tennessee game with interest since it’s a common opponent and both games are on neutral courts. There is an argument for Duke leapfrogging us if Tennessee prevails since they are beating their opponents, with the exception of Gonzaga by comfortable margins. I won’t be disappointed if it happens.

Until it settled on a combo that included D Lawson, Mitch, and Vick, KU played so many rotations that the team appeared to have difficulty playing cohesively.

The more games Grimes plays this year ………..The odds of him playing here next year increase . He still hasn't played at the level that he was expected to play at The ONE and DONE collar may have to be taken off of him...……..but him being here next year wont be a bad thing .

Mallory, have you ever imagined Grimes play for Wofford, Aggies, or even Stanford? You'd probably see the opposite.

You should ask Dotson, Wiggins, BMac, Embiid, and Jackson how Self held them back. If anything, looking at the draft position vs performance in the NBA I'd say 3 of those guys exceeded their ability at KU and got drafted higher than they should have been (BMac, Jackson, Wiggins) and one hasn't been drafted yet so his NBA performance is unknown.

Steve i m trying to understand your statement about Grimes …..didn't quite get it

He's saying Self is the reason Grimes is struggling. It's his though that Selfs holds back every freshman and that's why they don't play well (including Dotson, Wiggins, BMAC, Embiid, and Jackson, right Steve?).

Mallory, Grimes "probably" would've contributed more in other schools. He would've been their primary PG or he would've fit better in their system. Watch U18, team USA, how he gelled with other top HS players.

Shannon, I'm not implying anything about highly recruits getting held back or anything. I apologize if you think that way.