The display on the court was equally as ridiculous as his reaction.

The Jayhawks dropped each of the first two sets and had shown little resistance to an Iowa State squad with several capable attackers. The smiles, dancing and swagger typical for the KU team were nowhere to be found, as the crowd at Horejsi Family Athletics Center began to grow restless.

Desperate to simply hang around in the third set, the Jayhawks (13-2) watched four straight points go the opposite way. They stood five points from getting swept at home for the second time on the season, looking for something — anything — to start a run.

“This was our house,” said senior Madison Rigdon. “We knew we had to come back with some fire.” 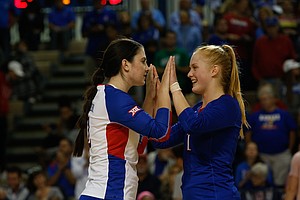 They just about burnt the place to the ground.

Rigdon exploded down the stretch of the third set, tallying three kills and a block as part of a 7-1 run to keep the match going. The tide started to turn.

Then it was Kelsie Payne’s turn to set the court ablaze.

“Kelsie was great,” Rigdon said. “I love when she gets a kill and just runs into everybody. It’s awesome.”

There was no shortage of those such moments.

Payne, who entered the day 19 kills shy of Caroline Jarmoc (2009-13) for second on the KU all-time list, played like she had that number in mind. The senior posted 22 kills on a season-high 61 swings, tallying a third of the team’s points in the final set while smashing the match-winning kill and setting off the post-match celebration and dance circle all in one fell swoop.

Jada Burse was first into the fray, followed shortly after by Payne. The senior danced on one foot with one hand holding her other foot and the other placed on the back of her head as she spun around in a circle, showing no signs of fatigue from the slugfest that had just occurred.

"She's as good as there is in the country when she's on," Bechard said, presumably speaking to Payne's play on the court and not her dance moves.

While the two seniors carried the offense, Bechard was even more pleased with how his team responded on the other side.

After giving up a high hitting percentage in the first two sets, the defense tightened. Five Jayhawks would go on to record double-digit digs, led by libero Allie Nelson and setter Ainise Havili, who tallied 24 and 17 respectively.

The defensive turnaround sparked several runs for the Jayhawks, including a 7-1 run in the third set, a 10-0 run in the fourth and a 7-0 run in the fifth. It was for that reason Bechard was able to smile as he walked off the court, as the Jayhawks advanced to 2-0 in conference play.

"We were playing hard and we were defending and we were hustling," Bechard said. "You can start playing better, but when you have to win three straight against a quality team, that says a lot about your team.

"I gained a lot of confidence in 'em tonight in that regard. For sure."

shouldn't that be double-digit digs?

You're correct. It's fixed now. Thanks.

Incredible game -- the atmosphere was a roller coaster. Started strong in the first set, but then the Cyclones were dominant. When we started the comback in the 3rd set the crowd exploded again. Still tired from that emotional game.

Hard to pick a top play.....but Zoe Hill's kill in the 4th set......off the Iowa State defender's face is up there. It was brutal!