In the early stages of Peyton Bender’s evolution as the starting quarterback at Kansas, new lessons come every week.

Saturday, in the Jayhawks’ 42-30 loss at Ohio, though the junior transfer misfired on some passes, Bender found a bit more consistency in terms of completions, going 30-for-47 for 343 yards, with two touchdowns and one interception.

Another aspect of playing QB, however, proved more confounding, as Bender suffered five sacks in an Air Raid offense built on shotgun snaps and quick decisions.

“There was some things on third downs, offensively,” third-year KU coach David Beaty said after his team dropped to 1-2, “that I’m not real happy about. We just didn’t do a very good job on third down at times. We held the ball way too long at times, and Peyton’s got to be better at that. He did some really nice things (Saturday), but he took some sacks in some situations where it was zero blitz and we knew we only had a couple of different things we could do with the ball. And you hold it and you know you’re going to get sacked.” 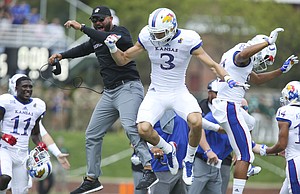 The Jayhawks converted on seven of their 16 third downs at Ohio, and the Bobcats only sacked Bender on one of those occasions. Even so, Beaty said his QB, who surrendered just three total sacks in KU’s first two games, has a couple of options with the ball in his hands and a defensive lineman or blitzer(s) closing ground.

“Get rid of the ball and snap it again or try to find your quick answer,” the coach said. “We just didn’t do a good job of that and I thought it hurt us on a couple of them drives.”

After spending his first two college football seasons learning under Mike Leach at Washington State, and working since he got to KU with offensive coordinator Doug Meacham, Bender, of course, knows these Air Raid truths. The QB also admitted he failed to follow protocol against Ohio (2-1).

Bender credited the Bobcats’ defensive front for forcing its way into the backfield before shouldering some of the blame for how those scenarios played out.

“But some of those they just made nice plays and other times in a few instances I could’ve got the ball out of my hand, seeing blitz,” said Bender, who is averaging 343.3 passing yards a game, with six touchdowns and five picks on his stat line. “Missed a few blitz pickups, but I can help my O-line out getting the ball out a little bit quicker.”

On one particularly disastrous snap in the second quarter, which went viral in the college football sector of the Twitterverse, three Ohio defenders had open season on the Kansas quarterback after the offensive linemen in front of Bender all went low for cut blocks on a play that completely backfired.

“That’s a call I’ll give the line, the cut call, if I want them to cut,” Bender explained, “and I was just hoping Quan (Hampton, freshman slot receiver) was going to get open over the middle of the field. And he got walled off and I held on to it too long. I just need to check that down. For cutting you’re not going to have much time, so you’ve got to get it out.”

In three games, Bender is 46 yards away from outperforming KU’s leading passer of 2016, Montell Cozart, who put up 1,075 yards in eight games during his final season, before graduating and transferring to Boise State.

Bender said he planned on reviewing the game footage to determine what caused some inaccuracies on intermediate throws at Ohio, too, as he continues learning from mistakes headed into Big 12 play.

The Jayhawks play host to West Virginia (2-1) at 11 a.m. Saturday at Memorial Stadium.

The play only impacted the final margin of loss by six points, but KU sophomore running back Khalil Herbert and the Jayhawks beat the fourth-quarter clock at Ohio on the game’s final play.

Herbert’s last two yards of a career-best 137 came on a rushing touchdown, his second of the day.

“It’s what our coach instills in us, never to quit,” Herbert said of his 19th carry, which got him in the end zone.

After Ohio still won by 12, leading receiver Brendan Cope (five catches, 104 yards) was asked for his thoughts on the game-ending play.

"I mean, the Kansas coaches are in a position, whether they're doing it for stats or to make games appear closer than they are, they do things for reasons that they do,” Cope said. “I don't take it too hard. We should still stop those plays and not give up so many yards. Ultimately, we're playing some less aggressive defenses and forcing their hands in some four-man and two-man offenses for the whole fourth quarter. We were in control, so I don't feel bad about it.”

The long, athletic backup wideout made a career-long 34-yard reception on one play, helping his totals of three catches and 77 yards.

Fairs was one of five Jayhawks with at least three receptions. Steven Sims Jr. and Hampton each made six, Chase Harrell added five, with a score, and Jeremiah Booker accounted for four and a TD.

Before the Ohio game, Fairs only had 2 catches for 24 yards.

One thing that I noticed in the second game of the season was that on most of Bender's incompletions, he was looking at only his primary receiver. If the play wasn't there, he wasn't looking at any other receiver so the play was usually incomplete.

I think we need to have a Quarterbacks by Committee. I would like to see Tyreek Starks run the ball, and Carter Stanley runs some plays. Bender seems to me he can't play a an entire game. He can't throw the ball accurately more than 20 times.

I think Peyton is starting to find his Place out there. Plus, we have Carter healthy after his "Stanley Knife?" Injury.

I was one of the KU Fans "sprinkled" around Peden Stadium Saturday, and I am optimistic about the KU Offense (admittedly, after a slow start). We ran the football successfully with Herbert finding holes generated by the revised KU O-Line (this is our defenses best friend). Hey, KU has several really good wide receivers! Peyton does need to find a "safety valve" to dump off to more quickly, when under duress. On the INT to Sims, he was coming open on the Slant, the throw was behind him, then tipped by Sims and picked off.

As for the KU Defense, that will be a separate story. Some of the other highlights were meeting "Rufus" the Ohio Bobcat Mascot (we should recruit him) and watching the Ohio Marching 110 Band boogie. Rock Chalk!

One other note from the Game Rosters. Ohio has over 70 Red shirts on their roster (Yes 70!). KU (due to lack of depth) about 7?

I'd like to see Carter Stanley given a little more playing time to see what he can do. He has the mobility to extend plays and avoid some sacks. Bender is not as dead-eye accurate as he was made out to be.

If this O-line is as bad as it looks then why not go with Stanley? Bender may have the better arm but it doesn't do us any good if he is can't move (which he can't and doesn't even try...he's like a freaking statue in the pocket) and doesn't have time to throw. Carter can at least make plays with his feet and he proved last season that he can throw. He looked really promising those last few games of the season. I wanted Stanley to start from the beginning because I knew what we had in him. Bender physically can make all the throws but he takes way too many sacks, can't make plays with his feet, and honestly isn't all that accurate.

Here's hoping that we Stanley sooner rather than later. We waited until the season was almost over last year to put him in....let's try and not make the same mistake twice.

The Kansas offensive line appears to be a pack of saboteurs.

This made me laugh.

In that GIF Bender didn't check down at all. Fairs was wide open on the other side of the field. Bender is not very good.

I think we've all seen Bender isn't the saving grace for our offense. Is Stanley ever going to get a shot?