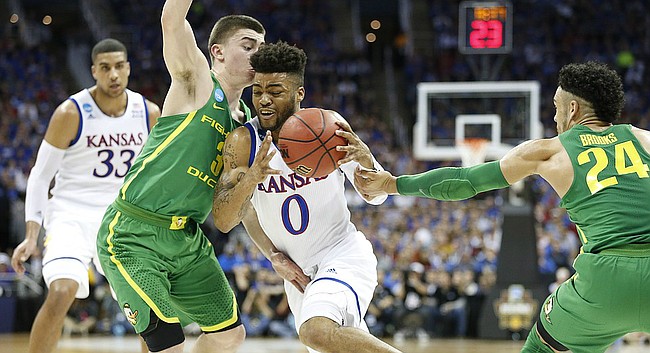 Frank Mason became on Thursday the 51st college basketball player named Player of the Year by the Associated Press, which has handed out the award 57 times.

A check of the records shows that the first 50 recipients all went on to play in the NBA with varying degrees of success.

All 50 were NBA first-round draft choices and 19 were chosen with the first overall selection. And get this: no AP POY has fallen past the 20th selection of the first round.

Sure, the emergence of the one-and-done player skews that history a bit since they tend to gobble up most of the early spots in the draft and push upperclassmen down the line. Still, it seems strange that everybody, including those who do mock drafts, assumes Mason has no shot at going in the first round.

Give me a compelling reason why Mason should become the first such honoree to drop out of the first round.

The first and only answer would be his size. If he becomes the first to win the award and not earn a first-round spot, it won’t be the only fact that makes him unique among the group of 51. He also is the first AP POY who does not stand at least 6-feet tall. Marquette’s Butch Lee in 1977 and St. Joseph’s Jameer Nelson in 2004 both were listed at 6-0.

Knee troubles shortened Lee’s NBA career to 97 games, but Nelson is in his 13th NBA season and has started 37 games for the Denver Nuggets. He was chosen 20th by the Orlando Magic in 2004 and has had a better career than most of the players chosen in the first round that year.

Yogi Ferrell, a 6-foot rookie guard out of Indiana, was bypassed in both rounds and has made 22 starts for the Dallas Mavericks. Michigan’s Trey Burke, AP’s top player in 2013, is 6-1 and was selected ninth in the 2013 draft by the Utah Jazz. He’s in his fourth NBA season and first with the Washington Wizards.

Mason has a few things going for him. He didn't lead his team in scoring until this season, so he's not going to freak out and start taking bad shots when playing with better scorers, the way some one-and-done players do. His work ethic will ensure he never stops striving to improve. Plus, he brings savvy that enabled him to keep his man from posting him up and to score at the rim against size.

And his confidence is such that he's fearless. Whereas some in his situation might look around them and wonder if they're good enough to make the adjustment, Mason has no such doubts. He figures he will figure out a way to get on the court because he always has.

It's so amazing to see such improvement from a junior year to a senior year - even though the junior year was darn good. This signifies to me that Frank will adapt to the NBA and be very smart in putting himself in the right position defensively, as Tom points about "posting up" this year.

Here's a kid who gets it, who's tougher than nails and who is ready to get even better. Here's hoping Frank's name gets called late in the first round, by a good team, where he can start building a long, productive NBA career.

We were talking about how Mason improved so much this year and tried recalling players who did likewise from Junior to Senior year. Couldn't really come up with one, although Heild was discussed.

It's also hard to believe Mason is the first Jayhawk to win the AP POY. Mason just needs to make it with some NBA team.

Bench player and role player his first three years in school. Became a starter his senior year and averaged 11 points and 7 rebounds on the national championship team. Never on anyone's draft radar prior to his senior year. Ends up being drafted in the 2nd round.

Jackson did good but I didn't think his impact/performance was on the elite national level. Mason's dominate leadership combined with his numbers and seizing the moments were spectacular.

How does Mason differ than JaqueV..? Regardless, I'd be surprised if FM doesn't get a call at all.

Vaughn couldn't' throw it in the ocean and Mason was almost 50% from three this year and Mason is a lot more athletic..

Seems a bit harsh for one of KUs all time great PGs. I bet his career FG percentage is better than you think, and I recall a winning last second three pointer against a Bobby Knight coached Indiana team as one of many highlights JV made. I do agree that FM is a better shooter, no doubt. Rock Chalk!

I didn't mean to sound harsh I loved watching Vaughn. I'll say for sure he was a better passer and pure point guard. But for some reason I just don't remember him shooting the ball very well.

Sorry Creg but you seem to have either mixed up someone else's name or you don't know what you're talking about.

If Mason opts to play overseas I envision him as a triple-double type player, much like Russell Westbrook is in the NBA. Defensive limitations caused by his size will limit NBA interest. Nevertheless, his ascendency from just another guard to POY is amazing.

Honestly the way he presents his work ethic and way to do it, how is he different than the guys that might be 25years old presenting themselves from africa without birth certs? When you win Suzi POY approval and a banner in the hawk arena you have a place. ESPECIALLY AS A GUARD.

Missing probably the best comparison Isiah Thomas. 5'9" was drafted number 60 and now in his 5th year is averaging 29 points 6 assist a game for the Celtics.. I could see Frank sneaking in the late first round if some team desperately needed depth at the point, but it's probably going to be a road like Thomas has taken late second round maybe not drafted and play his way on a team in summer league. I have no doubt in he'll end up playing some NBA ball because he's too tough just to give up.

The Isaiah Thomas comparison shows just how easy it is to overlook a player based solely on size.

I want Frank to reach one of his goals and that would be the NBA, First Round would be great and well deserved but I think he'll use getting selected in the second round as a snub and use it to play that much harder. I really like this young man. A Jayhawk through and through!! Rock Chalk

No doubt probably one of my favorite players to watch. I will miss him next year but hope I can catch him on some NBA games. He will work hard like always and probably out work some of the young guys at the combine. Right now is when he will do what he has been doing all 4 years at KU, defy odds. Go get them Frank and make everybody upset they didn't take a chance on you!

Maybe Isaiah Thomas is changing some minds about sub-6 foot guards in the NBA...I fully believe that Frank Mason is capable of carving himself a niche in the NBA, the guy is too offensively fluid and explosive.

Twelve dittos! Frank brings so many intangibles to the table to go with his tremendous athletic ability and strength. If the NBA is too narrow minded to take him, then as Mr. Woodling says, he will be a superstar in Europe.

I believe that Frank Mason has come the closest of any KU player in history to reaching his potential in college. He can still go further, but he clearly leaves KU with no regrets other than he didn't get to the Final Four or win a National Championship. As for those two areas, he did all that he could to make it happen, but it just wasn't in the cards.

Check out Muggsy Bogues. He was 5'3" and played in the NBA 14 years. He was chosen 12th in the first round of the NBA draft.

Great article, I was actually wondering the same thing during the season when all of the POTY awards started coming in. Has someone with so many accolades ever not get drafted or not go in the first round, and this article shined some light on that.

Really Frank's main downsides are his size and his style of play. I cringed a little every time he drove the ball hoping he wouldn't get hurt, luckily I don't think I can recall any major injuries to him during his 4 years here... But the NBA does play ALOT more games. Size wise he may be a little bit of a liability on D vs some teams, but I thought he held his own fairly well... Not to mention he was a beast getting rebounds.

Personally having watched him 4 years and knowing that he seems like a stand up guy as well as an amazing player... If he fell to the late first round I'd gladly take him and likely feel like I was getting a steal. But I also grew up watching Spud Webb win the dunk contest and people like Earl Boykins have success during his time in Denver. So I know size means nothing when someone can actually play.

Oscar Robertson told Frank at the Robertson ceremony that all these awards are moving him up in the eyes of NBA people. Oscar did play a number of years in the League and was one of the best. I enjoyed listening to him talk to Frank at the presentation of the award named after him.

The best quote of the season was Devonte saying that Frank thinks he can guard Lebron and that he might be able to. I hope all of you took the trouble to watch Frank play defense this year.

I would love to see the Spurs pick him up if he lasts that long.

Ironman PG with rock-solid ball control, who rebounds, distributes, dangerous from the perimeter, who can create his own shot, nearly unstoppable on drives to the basket, plays stalwart and smart D, mature team player. I could be describing the underrated player currently on course to win the 2017 ROY, except he's not quite as good as the player I described!

I think he's destined to make it. He'd make half the teams in the NBA better right now. I can easily think of 10 teams that should want him. Now of course, those teams don't often show the best judgment, so who knows, but if they had sense they'd take him eagerly.

Mason going to SA and contributing in a high level is the ultimate thing since Pop is over there. Personally, I'd love to see him in Houston.

Character. Winner. Team first. Fearless. Great shooter. Scorer when needed. Great defense. Pound for pound as strong as anyone. You can't tell me there isn't a spot somewhere on an NBA roster for a Frank Mason III, by draft or otherwise. .

There is a place for Frank on a number of NBA teams if some of them can take a chance on him because of his height. I saw him figure out how to take on a bigger man many times on defense this year. He has the basketball knowhow and the desire to make it, just hope a decent team gets him.