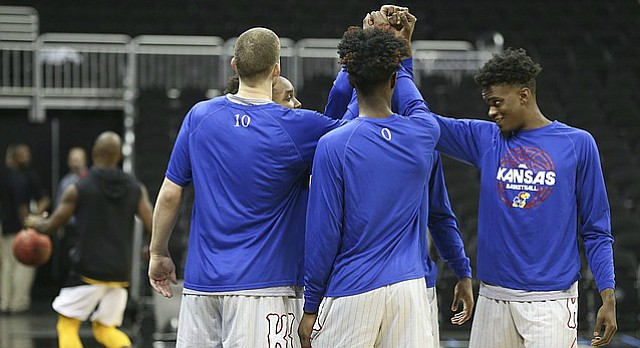 The Kansas guards come together in a huddle prior to tipoff against Missouri for the Showdown for Relief exhibition, Sunday, Oct. 22, 2017 at Sprint Center in Kansas City, Missouri.

1. Continue to clamp down

While Devonté Graham's 35-point outburst and Lagerald Vick's flirtation with a triple-double were the more noteworthy headlines, it was the Jayhawks' defense that won them last weekend's game.

The ever-improving KU defense forced 12 first-half turnovers — the fourth time it has recorded 10-plus so far this season — and limited the Orange to five made field goals.

And that was without much of a defensive contribution from any of KU's interior players.

With Graham setting the tone defensively, Svi Mykhailiuk defending right there with him and Malik Newman improving in both effort and execution game in and game out, the depth-challenged Jayhawks are slowly starting to morph into the kind of defensive team head coach Bill Self likes to see.

KU's big man looked lost for much of the game during the Jayhawks' 76-60 victory over Syracuse last Saturday, and a big reason for that was Saturday was the first time Azubuike really had faced a zone defense.

While that might sound crazy, remember the 7-foot Nigerian is still just 18 years old and has not been playing basketball his entire life like a lot of American players.

Still, being young or from a different country is not going to be a good enough excuse to draw sympathy from Self, who said he thought Azubuike took himself out of last weekend's game way too much, with foul trouble and an unwillingness to use his physicality as a factor in the heart of the zone. That led to pine time and several empty possessions, and Azubuike should be expected to have a much bigger impact in this one now that he has at least seen a zone defense like the one Washington will attempt to play.

It was a key last weekend against that Syracuse zone and it might as well be a key against the Huskies, given the two teams' similarities.

Sure, Self would take another 35-point game from Graham — or any other Jayhawk — but the KU coach on Monday marveled at the fact that the Jayhawks were able to win a game with basically two players performing up to their offensive potential, in Graham and Vick.

KU also is the only Division I program that currently has five players averaging at least 11.9 points per game and is averaging 51.7 points in the first half, while enjoying an average halftime edge of 22.8 points per game.

“Balance is hard to guard,” Self said recently.

And even though the Jayhawks had very little of it against Syracuse, that likely was an anomaly, and the Jayhawks figure to return to their old ways against Washington.

While this seems like an intriguing matchup given the fact that both programs are big names from power conferences, a closer look reveals that might not be the case.

Second-ranked and unbeaten Kansas enters this one having played the 29th toughest schedule in the country to date, according to the RPI ratings, with its Champions Classic clash with Kentucky and last weekend's win over Syracuse representing their signature victories.

Games against midmajor programs predicted to do well in — or win — their conference have filled out the rest of KU's nonconference schedule thus far, and the Jayhawks have been thrashing those foes, winning by an average of 39 points per outing.

Washington, on the other hand, has played a much different schedule. The Huskies' slate ranks 177th in Division I by the same metric and does not have a single impressive victory on it.

UW has won all six of its home games in the nonconference portion of its schedule and is 0-2 on neutral floors. Those losses, to Virginia Tech and Providence, have come by an average of 15.5 points per loss, and prove, beyond a shadow of a doubt, that the rebuild in Washington is real.

Syracuse probably will not be the best team the Jayhawks play all season, but the benefits of last weekend's showdown with the Orange could be huge.

In the 76-60 victory over Syracuse, KU got a chance to experience both what a jump in talent felt like and also what playing in a big time atmosphere felt like.

Even though there weren't a ton of people at American Airlines Arena, it got loud in there and a handful of notable NBA personalities were watching from the stands, including Miami Heat president Pat Riley and a couple of current NBA players.

Add to that the fact that Kansas was playing an opponent that looks awfully similar to the Huskies, and the advantages are endless.

The Jayhawks lead the all-time series with Washington, 8-1, which includes a 2008 victory in Sprint Center as the most recent meeting. Las Vegas lists Kansas as a 22-point favorite in this one.

While those facts, plus the obvious pro-KU crowd that is expected, point to a Kansas victory, it's important that the Jayhawks take this one as seriously as they did the last one and do not expect to just cruise past the zone tonight because they did it last weekend.

Will be interesting to see another attack on the zone defense. Hopefully, whoever plays at the middle of the zone, probably Lagerald or perhaps Malik, will be more aggressive offensively. Hard to believe that UW's zone will be as tough as Syracuse's, so the opportunities in the middle of the zone should be as available, if not more so, than they were against the 'Cuse.

I bet coach will use a different approach this time. He's the master of disguise and strategy. But who knows..