Some 20 feet off the back right corner of the court and another 20 feet in the air, the banner representing KU volleyball’s first ever Big 12 championship hung from the ceiling, covered by a thin blue plastic sheet. At its base, an inauspiciously hidden white cord draped down, tucked into the padding on the back wall of Horejsi Family Athletics Center as part of the pre-match reveal of the banner on Saturday.

The venue of the Jayhawks’ exhibition sweep over UMKC didn’t quite resemble the scene of the Big 12 clinching match against Iowa State. A deejay provided the music samplings in lieu of the KU band, while a normally overflowing capacity crowd didn’t quite pack the venue and thinned out heavily after the completion of the third set. 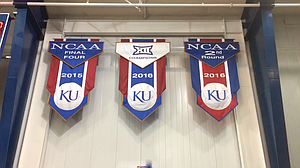 “The exhibition, I’m glad that the NCAA passed this legislation. It’s so big,” Bechard said after the match. “You get the feel of a real live match. … This had a gameday feel to it.”

And what better way to work out all the kinks?

Much of the starting unit was long decided by the time the players took the court. With regulars like Kelsie Payne, the preseason Big 12 Player of the Year, and Ainise Havili, a three-time All-American, powering the lineup, the Jayhawks rolled to a 10-1 lead in the first set and only surrendered a second point after sophomore Allie Nelson was unable to get to a ball with a dive that nearly took her headfirst into the scorer’s table.

Nelson got the start at libero, one of the key positions to watch for KU in 2017 after the departure of program stalwart Cassie Wait, and played well, even with the weight of an extra set of eyes on her.

“Can you believe Cassie would show up and put that kind of pressure on her?” Bechard joked of Wait’s appearance in the stands. “But I think Allie’s a kid that would drive some energy and some enthusiasm and some motivation from seeing Cassie out there.”

Nelson finished second on the team with 11 digs, playing heavily until the end of the third set, when Bechard opted for a lineup of mostly newcomers and freshmen. That is, once everyone got on the same page.

As the third set came to a close, a large group of fans headed for the exits. While a three set sweep normally would determine the end of a match, that wasn’t quite the case on Saturday.

“We definitely ran on the court and were like cheering and stuff and thinking it was over,” said senior transfer Taylor Alexander. “Then the ref was like, ‘You’re playing a fourth set.’ We were like, ‘Oh, OK.’ “

The fun was just beginning.

After a pair of Kansas players who had sprinted off toward the locker room returned to the floor, the Jayhawks turned to their bench. Tori Miller took over libero duties, donning the lone red jersey on the team. Payne and Havili soon after took seats next to Patricia Montero on the sideline, and one-by-one the newcomers began to enter for the first time — and in one case, re-enter.

After a UMKC timeout with Kansas leading 11-5 in the final set, Bechard called down to his players, specifically toward freshman setter Annika Carlson to let her know she was “going to go,” a warning he’ll give to players to let them know they’ll be entering the game soon.

Carlson walked down the sideline to some shouts from the KU bench. Those only intensified as she took her first steps on the court. Evidently, the celebration was a little premature.

Carlson returned to the bench with a sheepish smile, while Bechard couldn’t help but brandish one of his own.

Moments later, Carlson finally got her turn to get in the game. The Jayhawks finished off the match — for real this time — winning the fourth set in front of the enthusiastic group remaining in the stands, 25-22.

“With such a big crowd, definitely had a couple nerves going there,” Alexander said with a laugh. “It’s definitely something I’ve never seen before. We’ve had lots of fans and stuff, but this was just like that overwhelming feeling of knowing everyone in here is cheering for you.”