2007 Kansas football team to be honored at Sept. 2 season-opener

Nearly 10 years after the 2007 Kansas football team became the winningest in program history, members of the squad, who went on to lead the Jayhawks to an Orange Bowl championship, will see their names become permanent fixtures at the university.

The University of Kansas announced Tuesday the entire 2007 team will be inducted into the Kansas Athletics Hall of Fame. What’s more, cornerback Aqib Talib, offensive lineman Anthony Collins and coach Mark Maningo will be inducted into KU’s hall as individuals. Plus, both Talib and Collins’ names will be added to the Ring of Honor inside Memorial Stadium.

The entire team will be honored on the field Sept. 2, when David Beaty’s Jayhawks open their season against Southeast Missouri State. 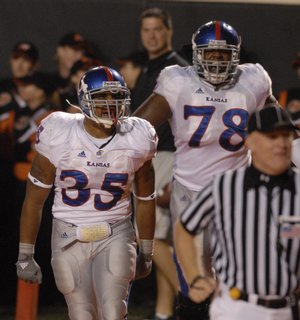 Kansas running back Brandon McAnderson celebrates in the end zone with offensive lineman Anthony Collins, back, following McAnderson's touchdown during the first half Saturday, Nov. 10, 2007 at Boone Pickens Stadium in Stillwater.

Mangino, who left the program in 2009, when he was forced to resign, after accumulating a 50-48 record over eight seasons, took home nearly every Coach of the Year award available in 2007 — American Football Coaches Association, Associated Press, Bear Bryant, Eddie Robinson, Home Depot, Sporting News, Walter Camp and Woody Hayes.

Talib, who went on to become an all-pro corner and Super Bowl champion with the Denver Broncos, earned a number of national honors, and was the 2008 Orange Bowl MVP. Talib, a Richardson, Texas, native, finished 2007 with 66 tackles, while breaking up a team-best 13 passes, to go with his five interceptions. Talib returned two interceptions for touchdowns, including a 60-yarder for the first score against Virginia Tech in the Orange Bowl.

Before becoming a four-time pro-bowler in the NFL, Talib registered 13 interceptions during his three-year career at KU, ranking him second all-time in program history, and broke up 45 passes. In 2007 he helped out KU’s offense as well, pulling in eight receptions for 182 yards and four touchdowns as a part-time wide receiver.

Collins, a fourth-round draft pick of Cincinnati in 2008, was a finalist for the Outland Trophy after helping anchor KU's offensive line. He earned First-team All-America honors from the Associated Press, Walter Camp, the Football Writer's Association of America, SI.com, CBSSportsline.com and Rivals.com.

A Beaumont, Texas, native, Collins started 24 games in his three-year KU career, playing at both right and left tackle, before playing seven seasons in the NFL. 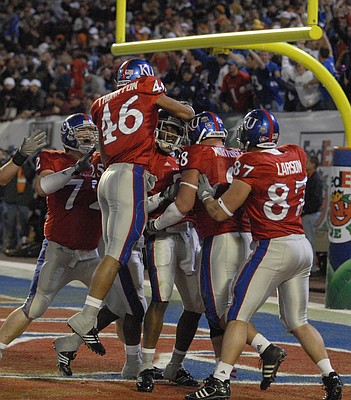 The Kansas defense piles on top of cornerback Aqib Talib after Talib's interception return for a touchdown during the first half of the Orange Bowl, which was Jan. 3 at Dolphin Stadium in the Miami area. Journal-World photographer Nick Krug discusses this shot, one of 1,075 he took during the game, for the recently revived "Behind the Lens" series, which will run in Pulse on Sundays. by Nick Krug

Some good memories coming back from the 07-08 season. Mangino was the man.

Can't wait to see the Phat Man back in Memorial.

I love that guy!

The fat man didn't look so fat during his days at Iowa State.

Great way to celebrate a new beginning and put the last 8 years behind us. Never realized how much I missed those games with 50k seats filled!

I feel like this is an attempt by KU to 'bury the hatchet' with what went down when Mangino was fired. And I feel like it's also an attempt to get Talib's support in the program by inducting him individually into the Kansas Athletics Hall of Fame. He hasn't been as vocal as other guys with his support of the Jayhawks and has even stated he was from somewhere else when they would announce the lineups in his NFL games. Both of these inductions I feel are needed, well thought out, and deserved by the inductees. I would also like to see Reesing, Meier, Harris, Stuckey and Briscoe individually inducted as well. Either way, great gesture and hopefully it kills off the last of the negative Karma that's been eating at this program since it happened.

I agree. Reesing needs to be in there.

I dont know what the standards for induction are, but if Reesing isn't deserving of the honor then very few are.

I think you have to be an all-American, or something like that to get in. For a player like Reesing, surely that requirement could be waived.