The development of every baseball player making the jump to a more difficult level follows a different path, but with 28 years of experience in the college game, Kansas coach Ritch Price does see patterns develop and knows when to start looking for progress.

“My experience has told me it takes kids about 25 games to become Division I players,” Price said. “You don’t get fastballs in fastball counts. Pitchers pitch backwards and you get exploited if you show weakness on a certain pitch, so there’s a learning curve that’s involved.”

Price has himself the poster boy for his 25-game development barometer in James Cosentino, a freshman out of Aquinas High, where he starred in baseball and football. 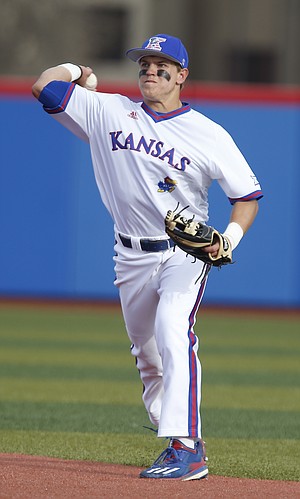 Kansas infielder James Cosentino (9) throws out a runner during the second inning on Tuesday, Feb. 28, 2017.

Cosentino, a left-handed hitting second baseman who stands 5-foot-10 and weighs 175 pounds, didn’t need to hit a ton to keep his spot in the lineup because he does such a good job with the glove and too much happens in the middle of the infield to sacrifice leather for lumber at his position.

“He made four fabulous plays at Oklahoma last weekend and he gets better every week,” Price said.

Still finding his way against harder throws with more refined off-speed pitches than he saw in high school, Cosentino hit .217 in his first 25 games.

Cosentino didn’t let it eat him up, kept stealing hits in the field, and sure enough broke through at the plate after 25 games.

In the 16 games since shedding training wheels, Cosentino is hitting .383. His uptick has coincided with the start of Big 12 play, which makes it even more impressive.

“When you play each day you get better,” said Cosentino, who bats in the No. 2 hole. “I just started to adjust after the first half of the season, started eliminating some bad at bats, stayed out of two-strike counts, started going the other way.”

It’s common for baseball players making a jump to stiffer competition to try to become a different player, instead of being the same player who naturally becomes better with reps.

“He’s made some really good adjustments at the plate,” Price said. “He over-strided when he got here. He was trying to hook every ball into right field and he’s done a great job of shortening the swing up and staying in the middle of the diamond. His development from the start of the season to now is just remarkable.”

Cosentino is not alone in that regard for a young team that struggled in pre-conference play and takes an 8-7 Big 12 record into tonight's opener of a three-game series vs. Baylor at Hoglund Ballpark.