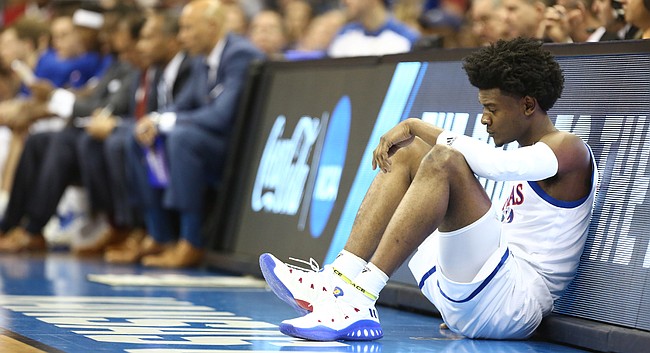 Kansas guard Josh Jackson (11) waits to check back into the game after sitting with two early fouls during the first half on Saturday, March 25, 2017 at Sprint Center.

Jackson is accused of striking an unattended car, inattentive driving and improper backing. Citations were filed against him in municipal court on March 27.

Police say Jackson backed into a car on the KU campus in early February and left the scene without providing contact information.

Jackson was scheduled to appear in court Friday morning on the charges, but his attorney, Hatem Chahine, said he requested that the hearing be rescheduled so he can take care of his client’s case in Douglas County District Court first.

“One thing at a time,” Chahine said.

In addition to his municipal citations, Jackson faces a single misdemeanor count of criminal damage to property in district court.

Police say Jackson damaged the car of a KU women’s basketball player outside a Lawrence bar in December after she argued with one of his teammates.

Jackson appeared in district court on Wednesday regarding the criminal charge. There, Chahine said he was planning to file for a diversion in the case. It was not clear on Friday morning whether that paperwork had yet been filed.

Diversion agreements vary with each new case; however, they typically involve a fee and require each applicant to stay out of legal trouble for a certain period of time.

If Jackson’s diversion application is accepted and he satisfies the terms of the agreement, he will not be prosecuted further. The diversion will remain on his record, though, unless he petitions for an expungement at a later time.

Aside from the traffic citations and criminal damage charge, Jackson does not have a criminal record in Douglas County.

Jackson is scheduled to appear in district court next on May 24.

Chahine said Jackson’s municipal court case was rescheduled to May 26.

Maybe Jackson should come back, carry KU to a record breaking 14 Big 12 titles, get Big 12 player of the year, NCAA Player of the Year, break the average points per game record, and win a National Title. That should bury all the silly mistakes he made this season.

Not likely John, but I like the sentiment. Maybe his mother Apples will tell him that his punishment from her perspective is to spend another year in college to mature. My guess is that she has given Josh a lot of "counsel" on these incidents. Her pose coming out of court said a lot about what her feelings might be.

I've not really had any hope he was going to decide to stay up to this point, but if I was looking to get out of town I would want this all done as quick as possible. The 5/26 date is like three weeks from actual draft day so seems strange to me to not just get it done with.

Why would you be in a hurry to leave your all expenses paid luxury condo complete with indoor practice court, personal chef and strength and conditioning trainer. Everyone needs to take the exit ramp out of fantasy land and come to grips with JJ being the #2 pick in the 2017 NBA Draft. The next time we see him in Allen Field House will be to hang is jersey in the rafters. Thanks for the great memories JJ.