Kansas running back Ke'aun Kinner (22) is caught between two Memphis defenders during the first quarter on Saturday, Sept. 17, 2016 at Liberty Bowl Memorial Stadium in Memphis, Tenn.

As much as turnovers plagued the Kansas football team’s offense in a one-score trip to Memphis on Saturday, the inability to sustain drives brought torment, too.

KU interrupted any chance of finding a rhythm with six turnovers in a 43-7 loss to the Tigers. But other than a three-play, 75-yard series aided by a 66-yard Khalil Herbert touchdown run, the Jayhawks (1-2) also routinely failed to stay on the field and get comfortable.

On seven possessions that culminated with a punt, none went for more than eight plays or 31 yards, or lasted longer than 4:10. On five of those occasions, Kansas went three-and-out. On average, the pre-punt possessions netted 10.7 yards.

The end of both halves cut off two other KU drives: minus-two yards on three plays in the second quarter and 18 yards on seven snaps in the fourth. Beaty’s Air Raid offense, which went for 121 rushing yards and 193 passing yards, also left the field on downs after a four-and-out in the opening minutes of the fourth quarter, down 29 points.

“They read us perfectly,” Shelley-Smith said of the Tigers, praising linebacker Genard Avery in particular. “They were there every play. They were hard workers, hard players.”

Ideally, Beaty would like to be able to quickly address and remedy KU’s offensive woes.

“It’s not like it’s hard to solve, but it’s hard to solve because they’re young men and they’ve gotta learn,” Beaty said. “And we as coaches gotta do a better job of really focusing in on the real problems of what’s going on.”

Unlike in KU’s first two games of the season, neither Montell Cozart or Ryan Willis found chances to connect deep with or get the ball in space to game-altering receivers LaQuvionte Gonzalez and Steven Sims Jr. at Memphis. 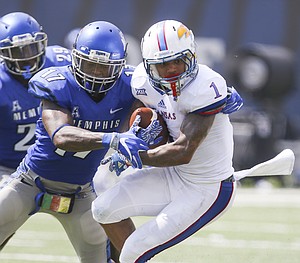 The Tigers limited Gonzalez to 44 yards on six receptions and silenced Sims to the tune of 15 yards on a pair of catches.

“Just all game those guys were soft (off the line of scrimmage), and it was kind of hard to run by those guys all game,” Cozart said of the receivers trying to break free in the secondary. “So that’s when the screens — I’m sure everybody was saying, ‘Why we wasn’t throwing the ball deep?’ — but they’re lining up 10, eight yards off already. So we just tried to take advantage of what was given us.”

Smithson back to return punts

Although Beaty maintained his confidence in Gonzalez as a return specialist earlier in the week, following a two-muff outing against Ohio, Fish Smithson replaced Gonzalez as KU’s punt returner at Memphis.

Beaty said many of the punts Smithson had to judge weren’t easy, and he thought the senior safety did a nice job.

“You had to use your discretion on whether you field them or not. I thought he made the right decision on every one of them,” the coach said.

On the subject of preparation, the same goes for every position, the coach added, referencing how KU had to start third-string center Jacob Bragg at Memphis, and even played No. 4 center Hunter Saulsbury late.

“Listen, it’s an opportunity for those guys,” Beaty said of non-first-stringers making it onto the field. “Let’s see what you do with it.”

Beaty lost a lot of pocket change from the KU fan base these past two weeks.

Why the hell is he going with Cozart ? How many chances does this guy get ? He hasn't gotten any better from the previous two seasons he's played. I mean, he looks like a lost dude out there and has even regressed.

We have another QB that set freshman passing records, and showed way better performance and productivity last year than Cozart ever has.

Beaty - what are you doing ? Willis deserves some loyalty. Quit screwing around and commit to Willis as your starter so we can move on, and acquire some stability in this offense.

I actually forgot about the freshman passing record. I would call that "earning it", wouldn't most people?

I have a feeling that if Cozart keeps getting the majority of snaps, we'll see Willis transfer at the end of the season (can't say that I blame him). Then we'll REALLY be screwed.

Willis makes one mistake and he is gone for the game. Cozart makes five mistakes, constantly screws up and is rewarded with more opportunities to make more mistakes, which he does repeatedly. Cozart will NEVER win KU another game. Willis should at least be given a decent chance to try.

I thought the same thing.

How many plays do you have to see before you know our Defense is a disaster?

How about the first 4 plays of Memphis Offense?

2nd and 3rd. KU’s tacklers threw their body at the runner. Missed both tackles. How long does it take you before you understand no one has taught our team to tackle, and indeed our coaches don’t know it either!

Four plays is enough for me. Our DC has NEVER been any good. Oh well, about 2 weeks and BB will start.

I get the concept of "earning it" but Beaty must also look at how players play in a game when things speed up. Cozart has proven to us all he can't handle the pressure. He has not "earned it". Why Beaty chooses to stick with him is maddening to me. Ok, I understand he was voted captain by his teammates, but he's not helping the team in the QB role, he's killing them with turnovers, like he's done in the past. Beaty, use Willis and/or Stanley and take off your blinders. Willis will make mistakes but stick with him and let him grow and learn so you and us all of us supporters have a future in football that resembles success. Cozart has plenty of talent to help in other positions on the field. We all know we are not going to win many games, but we would like to see improvement. Eat some humble pie and delegate coaching responsibilities so you can see the big picture. You're micromanaging, and anyone who has had a micro-manager understands how demotivating this is.

How about all the blitzes Memphis did. Seems like a short pass that would be behind the blitz would gain yardage. Until our guys find a way to overcome the blitz teams wull use it.

On about one play of every ten, KU defense looks brilliant – like they knew what was coming.

Opponents accomplish the same results against our offense at least once every two or three downs!

Either the Jayhawks don't pay attention to scouting reports, or have no confidence in teammates who are bright enough to detect things which give away tendencies or discrepancies that could/should result in broken plays or turnovers.

On offense, everything seems sluggish, as if half the players are surprised by the play call, slow to line up and not sharp in their footwork when the play finally gets underway. This seems to indicate "over-coaching," too many things being emphasized too much for inexperienced players to grasp at one time. The coaches need to have a better feel for the saturation point when more and harder practices become counterproductive. This point comes quicker for some players than others ... and may be unintentional on the coach's part, but can have a terrible effect on player confidence and morale. What the coach has learned over several years can't be taught in the blink of an eye.

I couldn't disagree more with the Bob Bailey comment regarding our defense. Our defense is much improved over last season. We have guys out there making plays, getting into the backfield and making tackles for losses with much better frequency than last year. Keep in mind, due to our offensive woes... our defense would be on the field the WHOLE game. But even when put back out there... they are forcing a lot more 3 and outs.. and giving us the chance to stay in the game (forcing punts, which we fumble away) and earning possessions which Cozart can't capitalize on. Look how many freaking turnovers we have had on our own end of the field this year. It is the DEFENSE that is preventing TD's in most of those scenarios. We lost starters from O-Line last year and we can't protect the QB. Willis isn't mobile, so the young O-Line will struggle to protect him. We can't run behind this O-line yet. But again.. the line is young. Cozart exudes no confidence.. no swagger, no emotion... no leadership. I don't want to see him on the field, because we already know what he can do and what we are going to get. I see improvement on this team, certainly in recruiting. I am critical of Beatty for trotting Cozart out there still. No one wants to see that. But I have faith in the progress he is making on this team. We won't be successful on offense until our O-Line matures and plays better. If you can't run behind them, teams will blitz Willis and he won't have time to make reads and make plays. I'd like to see anyone other than Cozart. Other than that, lay off on all the Beaty bashing. I don't want to keep firing coaches every 2-3 years. It's embarrassing. The guy cares... the guy is trying... recruiting is improved by leaps and bounds... give him time. My only ask is to stop trying to fit the square peg (Cozart) into the round hole (college QB).

I would agree. One bad pass defense play but otherwise pretty good defense considering they had to overcome 6 turnovers by offense. 5 three and outs. Defense had 5 sacks and 10 tackles for loss. What else do you want them to do?