In a 49-7 defeat at Baylor, the University of Kansas football team surrendered just more than twice as many points as it did seven days earlier against TCU. Defensive coordinator Clint Bowen, though, didn’t head into this week’s preparation thinking his group regressed.

As well as the Bears played, they finished nearly 100 yards shy of their season average (549.2) for total offense. Starting quarterback Seth Russell, though he didn’t have to play the second half of the blowout, only completed 40.9 percent of his 22 passes. One Baylor touchdown came from its defense, on an interception. The Bears scored another TD, following a KU lost fumble, when they only had to travel 12 feet to reach the end zone.

Bowen didn’t reference any of that information in his weekly session with reporters, ahead of Saturday’s homecoming game against Oklahoma State (4-2 overall, 2-1 Big 12). Instead, the assistant coach admitted Baylor wasn’t a good matchup for KU, and explained he couldn’t get over how many times his defense forced Russell’s hand and then failed to capitalize.

“That first drive was kind of indicative of the game,” Bowen said. “It’s an 11-play drive, and we had a plan on taking away their (run-pass option plays) and making the QB figure out where our conflicts were. If you look at it, he pulled it down three times on the pass. Our problem was we were stuck on the run-blocks and couldn’t get off of them to get him down on the scramble.”

Indeed, Russell rushed for two first downs and a score on the first series of the game. On each occasion, Bowen said KU’s defense successfully forced the QB to abandon his pass by covering his target, but then missed tackles at the second level.

“The snaps that we won, we didn’t win,” Bowen said. “… That was frustrating.”

Missing tackles proved a significant issue, but so did losing the battle at the line of scrimmage, against Baylor’s humongous group of linemen. Bowen said the Bears were run-blocking regardless of Russell’s decision-making on run-pass options.

“Until our good friends the officials will actually call offensive linemen down field on passing plays, that problem’s gonna continue,” Bowen said. “Your D-linemen, they’re playing their run gaps. That’s a smash-mouth deal. Well, now you’ve got 350-pounders that have got their claws on you at close quarters and you have to escape and try and tackle a guy.” 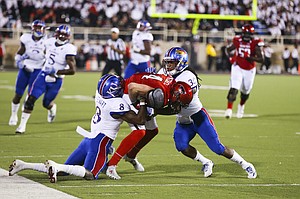 Kansas (1-5, 0-3) recorded a season-low 4.0 tackles for loss at BU, in part because Baylor’s style of play allows for fewer opportunities in the backfield. Still, sophomore defensive tackle Daniel Wise said the defensive players gathered to converse Monday about things they could’ve done to make it a more competitive game in Waco, Texas.

“If we’re not having a productive game,” Wise said, specifically referring to the defensive line, “then that says a lot about what’s going on with the game.”

Senior safety Tevin Shaw said the defense made too many mistakes this past week and the unit looks forward to playing better on its home field Saturday. When the game kicks off (11 a.m., FOX Sports 1), the Jayhawks, per usual, will be underdogs. Shaw said that weekly status inspires the defense to seek out disruptive plays — sacks, tackles for loss, forced fumbles, interceptions and the like.

“Whatever point in the game, if we’re losing and need to make a play, then it’s not like we’re gonna look for the offense to always make the play,” Shaw said. “On defense you can make plays and stuff like that.”

Wise, who has 15 solo tackles, 4.0 tackles for loss, a pass breakup, three quarterback hurries and a blocked kick in five appearances this season, agreed.

“That’s kind of part of what we want to do and need to do,” Wise said. “That’s the kind of things that D-linemen enjoy doing throughout the week — getting TFLs, sacks, quarterback hurries, quarterback hits. ’Cause we know when we do those things they affect the game and they help out the secondary, so the secondary doesn’t have to be so stressed and worried about the quarterback running away or getting an easy pass off.”

Reading Bowen's comments, you understand why this defense has improved - real coaching and very good players, plus experience. Had Bowen been hired as H.C., we'd have the improved defense, plus a legitimate offense.

I agree with your statement about Bowen. I've always supported Coach Bowen, even when it seemed the majority of posting individuals on this site were calling for his firing.

His explanation of what his defensive scheme was in the Baylor game displays he had a legitimate game plan for Baylor's offense. Just that Baylor's offensive line did a good job of holding their run blocks and allowing Seth Russell to run to daylight.

So, Coach Bowen has displayed his coaching abilities even better this season with better quality defensive players than what Kansas recruited from 2010 to about 2013 or 2014.

Sure, there's some players who performed well on past years defensive units.

But, this season, the depth on the defensive side of the ball is way better than the aforementioned past seasons.

I wonder by referring to the officials as "good friends" if you avoid repercussions associated with criticizing the refs. During the TCU game I can honestly say that I did not consider the officials as good friends to KU. In the Baylor game, KUs lines both offensive and defensive were simply outmanned.

“Until our good friends the officials will actually call offensive linemen down field on passing plays, that problem’s gonna continue,” Bowen said.

I too wanted Bowen as HC, but in all fairness, he has more solid experience on his side of the ball than the offense.

We just need to let this OL develop and watch our offense improve each year.

A young team like ours will first play well at home. Then when experience and confidence increase they will compete on the road. Baby steps.

I was in favor of Clint getting the HC job but if he can build a strong effective defense then hopefully it will work in his favor next time the position becomes available. Feel pretty certain that Beaty will either be fired or bolt for a better job. Hope its the latter.

The position coaches on Defense are doing a good job. The problem is that NO ONE teaches tackling. And our Defensive Scheme is very bad -- a football player in sixth grade could beat it. It isn't Bowen doing the job, his position players seem to teach what they know. Not including tackling nor assignment on Defense!

I appreciate Bowens comments on the run blocking. Baylor has linemen beyond the line of scrimmage nearly every play. It's a joke.

Seth Russell verbally committed to KU in 2011, Gill's second season at the helm.

After Gill was fired and Weis hired, he changed his mind and chose Baylor.

Russell red shirted and then was a backup to Petty for two years.

This young man certainly "paid his dues" and has developed into a fine QB.