Ryan Willis working through and learning from mistakes

Kansas quarterback Ryan Willis throw from behind a pile of players during the first quarter on Saturday, Oct. 8, 2016 at Memorial Stadium.

David Beaty waited for University of Kansas quarterback Ryan Willis to reach the sideline Saturday afternoon following the Jayhawks’ first offensive series. Willis had just thrown an interception and his head coach wanted to make sure the sophomore QB knew what a bad decision he made on that particular heave, retrieved by TCU safety Nick Orr.

Willis, Beaty revealed Tuesday at his weekly press conference, beat the coach to the breakdown.

“Coach, I saw him go to single-high and I threw it right to him,” Beaty related of the quarterback’s first words following the pick.

After a 24-23 loss against TCU, Kansas football coach David Beaty speaks with the media about strong practices in the last two days, Saturday's matchup against Baylor, becoming more physical up front and much more.

Beaty quickly moved on from that light-hearted, joking exchange in the opening minutes of a scoreless game to provide his still developing quarterback with instant feedback.

Willis described Tuesday the key takeaway from that particular dialogue with KU’s offensive coordinator and quarterbacks coach: “I should’ve got down to my under route. (I) threw into single high, threw into the middle — which is a big no-no. Tried taking a shot and the other team capitalized off it. Can’t make those mistakes. I’ve gotta be better.”

Willis threw two more interceptions in the Jayhawks’ 24-23 loss to TCU, and while sometimes extenuating circumstances lead to a quarterback’s mistakes, Beaty made it clear such cases didn’t exist on any of Willis’ three picked-off passes.

“They were absolutely on him, and I love him to death,” KU’s coach said.

Beaty says those sorts of things because the two have developed a sound working relationship. Willis dedicates much of his down time to studying game video and he doesn’t take his coach’s critiques personally.

“He got on me in the film room a little bit,” Willis said of the quarterbacks’ review session following a game in which the sophomore’s interception total for the season quadrupled. “That’s because he expects me to be great. I think I can be great with his help and coaching.”

KU sophomore receiver Steven Sims Jr., who caught nine Willis passes for 101 yards versus the Horned Frogs, said the quarterback from nearby Bishop Miege responded appropriately to his errors. After Willis threw a third interception in the first half, Sims told the QB the receivers still had trust in him. In the second half, though Willis didn’t throw a touchdown pass, he didn’t turn the ball over, either, while completing 15 of 22 throws for 230 yards. 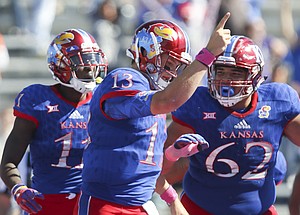 As Sims pointed out, Willis also rushed for a 21-yard TD late in the third quarter.

The Jayhawks couldn’t manufacture a last-minute score on their final drive against TCU, but Beaty said even in coming up short, Willis should benefit from going through the pressure-packed two-minute drill.

“We learned a lot of lessons there. We had two timeouts we had to burn on that last drive on sacks that we really shouldn't have,” Beaty said. “But he'll learn from it, and we'll get going moving forward.”

Kansas plays Saturday at No. 11 Baylor (5-0, 2-0). The Bears lead the Big 12 in passing defense — 166.2 yards a game allowed in victories over Northwestern State, SMU, Rice, Oklahoma State and Iowa State.

Junior linebacker Joe Dineen, Beaty added, is recovering “a little slower than I thought.” Dineen has missed each of KU’s previous two games after suffering a leg injury early on during the Sept. 17 game at Memphis.

Though kicker Matt Wyman broke a wrist in the Jayhawks’ loss to TCU, Beaty reported this week on his Hawk Talk radio show the senior will be able to play at Baylor.

We would be so much farther along as a team right now if Beaty had not completely botched the QB situation. Willis could have used most of the URI reps, the Ohio reps, the Memphis reps and TTU reps to improve. I'm convinced we would have won the Ohio game if Willis had been the starter (and finisher), and I believe we would have beaten TCU because Willis would have been sharper.

Each time Beaty critique a QB play, he needs to open with: this was largely my fault.

Can Beaty learn from his mistakes and grow into the HC position? Time will tell but his stubbornness does not bode well for personal development.

Good post Brett. Not sure about beating TCU – too many variables and when you are at or or very close to being the worst FBS not getting the brakes going your way doesn't help much.

Problem with that is, with brakes, you want them stopping, not going.

A good head coach is going to have to understand the difference between tenacity and stubbornness, and between flexibility and indecisiveness.

His refusal to start Willis until last week was baffling and so is his fondness for the horizontal passing game. But he did finally see the light on his starter and he did call a good game so I’m optimistic.

If this team continues to show character, never give up, work hard the rest of the season (and the off-season!) next year could be the turnaround. Receivers need to learn to block for each other, though.

And I hope the coach settles in on his starters early, especially in the skill positions but really all positions.

The first few games we lacked unit effectiveness. Now, we are starting to play as a unit. A couple of weeks ago we could not have executed that hook and ladder.

I see progress. We are capable of winning a game or two more this year if we have a game where we get a few breaks going our way.

The importance on settling on starters can't be overstated. Beaty's unwillingness to issue a depth chart, and the fact that he was making changes up until game time suggests that he was either playing mind games with his players or that he didn't have a clue what he was doing.

Contrast this approach to the one Bowen used: name your two-deep, start evaluating and make changes as warranted. Just because you name a two-deep doesn't mean that it's written in stone but, to use your phrase Randy, it helps build unit effectiveness.

Guys will rise and fall as the season progresses, this much we know. But Beaty's approach was highly counter-productive and it slowed the development of the offense. That's 100% on him. Not Cozart, not Willis, not anyone else.

Breaks going our way? Defense got 4 tos and are fourth in nation in tackles for loss, and miss 3 fgs. I think everything that can go our way is but you gotta take it!

Not that low because of defense but because offense is a turnover machine!

While most agree Willis should have been the starter de facto based on last year, Beaty is slowly turning over every rock. He will not have to go back and forth this way. It may not be the way we would do it but he is the coach. His future rests on his decisions. He is the right man for the job. Now, let's get out of his way and cheer him and his team on. These kids are playing hard and he has brought some talented kids in here.

I'm one of the biggest critics when it comes to the Willis/Cozart decision; however, I still think that the offensive line is what was driving that decision. Cozart can be used to move the pocket, Willis cannot. Willis can move forward, but if the pocket breaks down, so is he.

I think Cozart was being used until the offensive line got some reps, as it strengthened and could hold the line to at least a point, Willis was moved into the starting role.

I still believe that the QB can improve a line with quick releases and a strong arm, additionally one that can improve the RB core as well. We should see that with Willis, he makes the team better not just the QB position.

Cozart should be getting reps with the receivers.

I am amazed that any of you think we might win a game or two. As far as I am concerned we one a game and we have improved. So for this year, Beatty is Ok with me! We are playing with a depleted team loaded with Freshman and Sophomore starters and backups. We may not even have a full complement of scholarship players for another two years. If we win one more game Beatty goes from OK, to a greatly improving HC that needs more time....as in four more years!

As far as Willis and the other starters. I do think Beatty is remiss in not having a depth chart posted and naming his starters. Players understand that if they are not playing well enough that the next guy in line will get his chance. Joe is correct, we are not doing Cozart any favors buy keeping him at QB. Let him start at WR and maybe he will have a minute shot at a UDFA contact after his senior year.

I mostly agree, but I think I'm not alone when I say these occasional close calls are getting old, and a win somewhere along the line would do wonders for morale with the fan base. We've had a TCU game three years straight and had that goal post murdering West Virginia win a few years ago, but could never get any kind of momentum off any of them. So a win would be considered momentum, two wins might mean the goalposts should go into hiding again!

The only game we will win the rest of the year is the Iowa State game.

Meanwhile, apparently we've got a new "alternate" uniform coming up for the Oklahoma State homecoming game...

Ok, doubters, when I say we have the capacity to win another game or two why would I say that? If Texas continues its skid and even though they may have better athletes and a better record at this time of the season it's all about attitude. If the players feel the season is lost, guess what, it is lost. Meanwhile if we continue to play tough, never say die, never give up I think we can win. Remember, we are dealing with young men, elements, and the way the ball bounces. That's why we play the games. So, if the offense continues to improve and the defense plays like it has we can win.

Remember how close TECH was for most of the game? I think we can beat any team that's having a bad day but Iowa state is no slouch. That will be a tough competitor. It's time to beat Texas. Been too long. I have a good feeling about that game.