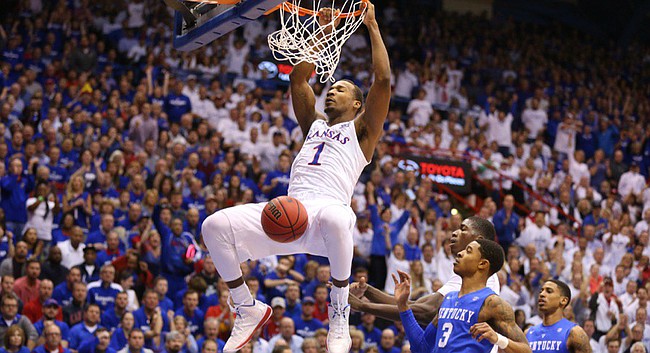 Last year, when the Kentucky Wildcats invaded Allen Fieldhouse for a regular season match-up with Kansas in late January, the game proved to be everything college basketball fans hoped it would be and lived up to the hype that wound up being worthy of the meeting between two college basketball blue bloods.

The two conferences announced Tuesday that Kansas and Kentucky would meet again in the SEC/Big 12 Challenge, this time on Jan. 28, 2017, at Rupp Arena in Lexington, Kentucky.

The meeting will mark the fourth season in a row that KU and UK have squared off on the basketball floor and the sixth time in the last seven seasons, including the 2012 national title game in New Orleans.

The showdown, which figures to draw at least as much hype as last year's meeting, which Kansas won in overtime, will pit the two winningest programs in college basketball against each other, as KU, with 2,186 wins, trails only Kentucky, which leads everyone with 2,205 all-time victories.

The 2017 SEC/Big 12 Challenge will mark the eighth meeting between the two schools in the Bill Self era at KU. The Jayhawks hold a 4-3 advantage in that span and Kentucky leads the overall series, 22-7.

The Challenge has six teams ranked in the super-early ESPN.com top 25, including four Big 12 teams - No. 3 Kentucky, No. 4 KANSAS, No. 15 West Virginia, No. 18 Oklahoma, No. 19 Texas A&M and No. 22 Iowa State. Two games will pit ranked squads against each other - Kansas at Kentucky and Texas A&M at West Virginia.

Here's a look at the rest of the match-ups:

Clearly, a no-brainer for scheduling and interest purposes. The two schools with the most college basketball wins in history is always good for ratings. Hope the game and outcome are as exciting in Lexington as they were in Lawrence.

Love it. Another SEC / Big 12 Challenge and another year that Missouri is left out. Classic. How fitting.

The other thing to consider is that the event is called a "Challenge". To whom does Kim Anderson's team pose a challenge to? Even a Big 12 bottom-feeder like TCU could wipe the floor with them.

So what your telling me is that Bill Self while at KU has gone 4-3 against the winningest program in college basketball history while every other coach at KU combined to go 3-19. Just another example of Bill Self being the man.

Ted Owens was responsible for 12 of those losses to UK. From 1971 until 1985, Kansas and Kentucky were annual opponents, and during a stretch from 1974-1984, the Wildcats won 11 straight against the Jayhawks. This was during a period where KU basketball was mostly ho-hum. The series ended after Larry Brown's 1985-86 team defeated Eddie Sutton's squad in Lawrence, with Sutton saying he wanted to end the series because UK didn't recruit in the Midwest.

The win against Kentucky of 160-95 occurred after Sutton left and Pitino took over. A regularly scheduled series ended a long time ago. Since there have been a couple of times where a one time home and home were scheduled. I think it is time for KU to push to have a home and home with at least one of Duke, Kentucky or Michigan State each year. Of course that is what is taking place with the current Champions thing in November so as long as that lasts there is no need to schedule them.

I remember two of those losses were in games in which we absolutely blew the lead in the last 2 min. of the game. A frustrating time in Kansas basketball.

Thanks for the exact stats, very interesting. That said, Bill is still the only one of those coaches with a winning record against them, and therefore still a bada**

Not so sure about that. The one time the two teams played for the highest stakes - the 2012 NCAA title - Kentucky wiped the floor with Kansas in a game that wasn't as close as the 67-59 final score indicated. Also have to remember that three of Self's four wins came against Tubby Smith's last three UK teams when the Wildcat program was in a slump. You can say that Bill Self is a bad@$$ for a number of reasons, but his performance against Kentucky isn't necessarily one of them.

Bryce I realize that recruiting is the most important factor in determining who is a prominent college basketball coach and Calipari plays the OAD game better than anyone, but please acknowledge the fact Calipari had significantly more talent than HCBS had in 2012. Never satisfied with a loss, but all things considered I was pleased with our competitiveness.

Bryce, I could not disagree with you more. Kentucky hardly wiped the floor with Kansas in 2012. Kansas came back from a large deficit and if Eli had hit his last three pointer, we might have pulled off our great upset. As it was, I was really proud on how well our team did against a more talented Kentucky.

And then of course, there was that very forgettable trip to Indianapolis to play the Wildcats in November 2014 when they crushed us by 32 and made us look like a Division II team.

Even more of a talent disparity in 2014.

The calendar is MARKED!

If Bill Self has his way, expect to see a Big12-ACC Challenge for the next two seasons featuring a home-and-home with Duke. Self has said this is on his bucket list so there should be no surprises when it happens.

When Roy Williams retires at North Carolina, perhaps we can start a home-and-home with the Tar Heels - assuming the NCAA hasn't shut them down...

NCAA sanctions against UNC? Not going to happen.

Not that it comes as a big shock , but anyone else see that Porter dropped KU and UK from his list ? His 5 schools are now Missouri , Indiana , Oklahoma , Virginia , and Washington . I think he's going to end up at Washington with his dad , but still a little surprised he dropped both blue bloods .

As a famous poet once penned...

An I can tell you honey. You can make my money tonite...