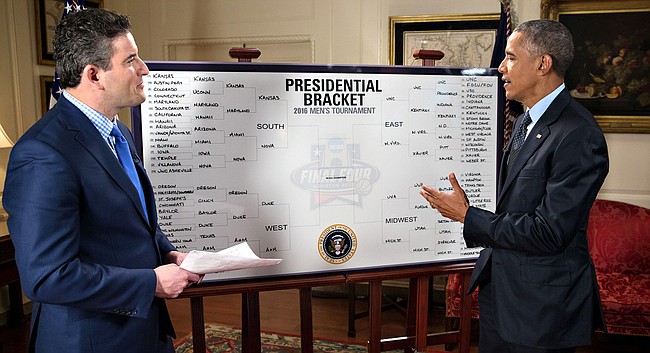 President Barack Obama makes his picks for the 2016 NCAA Men's Basketball Tournament as part of a segment with ESPN's Andy Katz, left.

Obama picked Kansas, Texas A & M, North Carolina and Michigan State to all reach the Final Four in a bracket he filled out for ESPN.

His choice might be an unpopular one around Kansas, though. Obama hasn't correctly predicted the national champion since he picked North Carolina in his first year in office in 2009.

'Bill Self owes me'

"Bill Self owes me. I’m putting Kansas in here. Coach, I’m just teasing. I’m not putting pressure on you. But I think the Jayhawks in a squeaker get past UNC."

Obama also picked the Jayhawks to win the national championship in 2010 and 2011. Duke won in 2010 and UConn won in 2011, while Kansas missed the finals both years.

Obama told ESPN that filling out a bracket was a reminder that "college sports at its best can bring people together."

Kansas junior guard Wayne Selden Jr. said of Obama's pick: “It’s an honor and he said my name. It’s really an honor that the president of the United States is paying attention to stuff like this. This morning I got a bunch of texts from my family that the president said our name (his and senior forward Perry Ellis’). We met him once. He was a great guy and we want to meet him again.”

“We’re excited he picked us, but we can’t really get ahead of ourselves. We have a game tomorrow and that’s our focus right now.”

Just like all the office pool players trying to win big, Obama selected one upset in the first round. He has No. 13 Hawaii, his home state, beating No. 4 Cal. 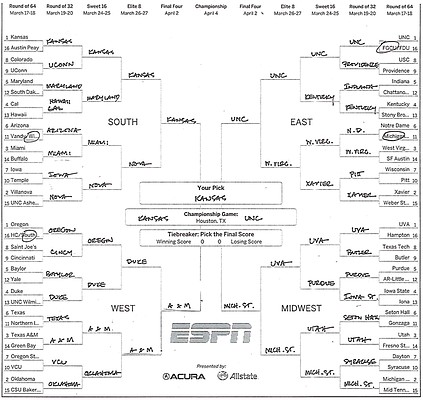 The jinx is on.

lol..just a slight oversight. Thanks Jay.

Great. The kiss of death. Everything this man touches turns to sheet. No WAY we win now

Switch back to Fox News and gobble up more of the bullsh*t they're feeding you.

Rattle off all of the great accomplishments......

Rolling Stone? Will that be next to the UVA rape story?

You're insulting the viewers of the most viewed media source in America and offering Rolling Stone as an alternative? Nobody could make you seem as clueless as you already have.

The article is written by a Nobel prize-winning economist, you moron.

I like the pic. That will mean he got it right his first and last year in office...

Thankfully this is the last March that ESPN slobbers on O'Bama's butt.....

I'm for anything and everything that would motivate our guys. It was clear from Obama's visit with the team, they were inspired. Hopefully this group of incredible kids will redouble their focus to make the POTUS look good and earn a White House visit before his departure.

Trump will actually be focused on helping businesses create jobs, reducing the debt and making the country safer. As much as I despise the annual ESPN bracket promo, at least it keeps Obama from doing the opposite for a few precious moments.

You'd have to point out where I said that. I'm not actually.

In John Pritchett's post he was imagined as the next President. The things I mentioned are what he would do in that scenario. The opposite of those things is what O'Bama has done.

Sorry to disappoint you. If you're a Trump supporter you should feel good about his chances for the White House.

Well, it's fair to say that you're a fact denier anyway. Under Obama's watch, the deficit has reduced faster than any president in history, and job creation has been positive for a record number of consecutive months.

Al. Are you really that stupid or are you that dishonest? Job creation? You mean the 29 hour jobs that were created to avoid the tax/not tax of Obamacare? Fewer people are working in America now than when Carter was in office. Reduce the deficit? From when? 2009? Yay! The debt (a real number) has more than doubled to almost 20 Trillion. About 1/3 of the federal budget is interest. Assuming that you're a taxpayer and not another government handout consumer, you owe about $160,000.

Seriously. Al. Adam. Are you that ignorant or that dishonest?

That he is me

You've got to see that's how I dream to be

I dream I move, I dream I groove

For just one day if I could

I dream I move

I dream I groove

Sorry Kid. I'm flattered but you're no Jay Scott. Hate to crush your dream.

I hope that this time the President is right. Aside from taking out Osama, he's managed to be wrong about virtually everything else.

What rationale is that based on? Mr. Trump didn't attend Stony Brook. It's not really known as a business school. Is it that you believe it's the closest to Manhattan? Is that what you meant? That would be Iona.

I was told quite emphatically once that this is not an appropriate site to discuss politics or religion and I agreed. Perhaps you did not see the memo. Those two topics are divisive and polarizing. Can't we keep our comments related to KU basketball? Just because the POTUS picked KU to win it all, should not turn this site into anything other than a discussion of our basketball team and hopefully its success in the tournament. Save the political bickering for another forum.

Thanks for that reminder...

This site has become very divisive and polarizing over the past few months even without political and religious discussions.

True. People could help that by measuring the tone of their comments.

Trump is too busy lying to people about how great he is and inciting violence to even understand the game of basketball much less acting like a semi-normal American who takes a chance on picking winning teams. He's the WORST of America. Can you say bigot?

He surely angers the fascists.....

Even if we kept the forums about basketball, there is always that one person who has to throw religion and or politics. I'm all about keeping the talks strictly basketball. With that being said, Kansas WILL win it all!

If we're going to keep politics and religion off this forum, don't report the picks by the ISIS-apologist divider-in-chief. I remember one of his trips to the Middle East, when he eschewed meeting the troops to shooting hoops.

Thank god most sports figures are so apolitical in public. I don't know what I would do if Bill Self came out and endorsed one of the idiots running for office. Could you imagine knowing he voted for Brownback? Or to find out he's a closet Trump supporter?

Nearly all pro athletes and coaches eschew mediocrity, confiscation, debt and division in favor of opportunity, exceptionalism, stewardship and unity.

I would hope that Coach Self is no different.

Joe, pretty sure he is a Democrat

Seems to me we lower ourselves associating any politician with the U. of Kansas.

Ike had golf, JFK had women, LBJ had his ranch, Nixon bowling, so on and so on. President Obama likes basketball and picking tournaments brackets. It, in and of itself, is not a reflection of his political success or failures. I do so hope that the next President doesn't have a made for TV show on their bracket, adding this to the wall to wall coverage and two hour selection show is an overload of the senses. Plus, finding political discussion on a sports site, kind of sad.

Particularly since the political discussion takes so much of the same shape as the sports discussion:

Bill Self is not thrilled about Obama picking KU to win. Self was quoted as saying the President had picked KU three times before and it didn't work out.