Kansas University bounced back from its first tennis setback of the season with a 7-0 sweep of No. 46-ranked New Mexico on Sunday at the Jayhawk Tennis Center. 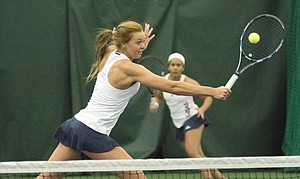 “It’s very encouraging to have defeated our third top-50 team,” Kansas coach Todd Chapman said. “I think it was made even more encouraging after having such a disappointed team on Friday. I was excited to see how we would respond to that loss. It told me a lot about our team.

“We have five freshmen and sophomores, so I didn’t know how we were going to respond. Losing in a situation where we thought we had some chances to be successful and not doing it, for this young of a group to approach that the way that they did is impressive to me.”

KU will host SMU on Friday.