Kansas sophomore Lauren Aldridge (3) crosses the ball over as she brings it up the court under pressure from Oklahoma's T'ona Edwards (2) during their game Saturday afternoon at Allen Fieldhouse.

After having one of its worst showings in a 26-point shellacking against TCU on Wednesday night, it was hard to imagine how the Kansas University women’s basketball team would respond against Oklahoma.

The Jayhawks played one of their best games of the season, falling to the Sooners, 72-66, Saturday at Allen Fieldhouse.

“We had a come-to-Jesus meeting the other day in the film room,” KU guard Lauren Aldridge said. “It was just about how we had to represent ourselves and represent this university.”

By the end of the first quarter, the Jayhawks held a nine-point advantage, as Aldridge (20 points, seven assists) and junior guard Timeka O’Neal (15 points, three assists) were uncontainable from the behind the three-point line. O’Neal was 3-for-3 from three in the first quarter, 5-for-8 for the game.

The Jayhawks (5-21 overall, 0-14 Big 12) held a surprising 28-18 lead halfway through the second quarter. The Jayhawks were in the driver’s seat until Aldridge turned her ankle with 5:37 remaining in the first half. 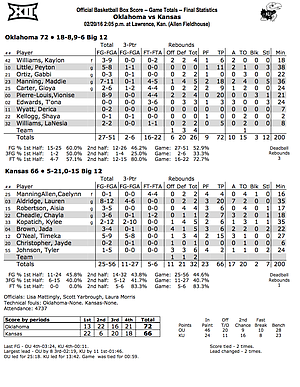 Aldridge did not return until the 1:49 mark.

“It was too long,” KU coach Brandon Schneider said.

The Sooners switched their game plan to take advantage and slow down the hot-shooting Jayhawks.

“We had to go to the half-court trap because we couldn’t guard them in man,” OU coach Sherri Coale said. “We couldn’t. We got hit with multiple screens and closed out short and shy and shallow on shooters. That defense saved us because it stretched those shooters.”

The Jayhawks struggled offensively for the final six minutes of the first half as OU methodically chiseled away at the lead. The Sooners scored 17 unanswered points and took a 35-28 lead into halftime. OU forward Vionise Pierre-Louis (20 points, four rebounds) crushed the Jayhawks in the paint, scoring 8-of-9 for the game.

“I feel like when we were playing really good defense, it created good offense for us,” Schneider said. “We played with a little more pop. In those stretches when they were kind of pumping it inside, we were letting it in there too easy. I think that is what deflated our offense a little bit.”

The game followed a pattern of the Sooners going on extended scoring runs, only for the Jayhawks to shave the lead back down.

Late in the game, KU missed three straight baskets and allowed the lead to balloon to 65-57. But O’Neal found Aldridge wide-open for three with 2:45 remaining.

The two teammates were clearly in sync. O’Neal was quiet about her big game in front of the microphone, but Aldridge said O’Neal was vocal during a late-game timeout. 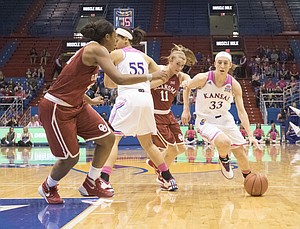 “She looked at me and said, ‘Hand down, man down,’” Aldridge said. “I said, ‘You and me both, girl.’ … Whenever you have another teammate that’s hot, it’s fun to feed them.”

Aldridge nailed a long two with only a minute remaining to bring the Jayhawks within a basket, 66-64. The 5,000-person crowd started booming.

The Jayhawks benefited from an unusually large crowd. Fans showed up for the “Jayhawks for a Cure” game, an annual event to raise money and awareness for cancer treatment and research at Lawrence Memorial Hospital and the KU Cancer Center.

The crowd boost would not be enough. The Jayhawks ultimately lost after once again going cold on the offensive end. The Sooners continued to knock down free throws as the Jayhawks intentionally fouled to keep the game going.

KU will play Oklahoma State on Wednesday in Stillwater, Okla. The game will be KU’s second-to-last away game of the regular season.

Wow! We scared someone!

Hat's off to the ladies for giving it everything they had. Good effort.