Incentives, details of termination or buyout in place in new Beaty contract

Kansas head coach David Beaty slaps hands with two-year-old Nadia Carrigan, Lawrence, as she greets the Jayhawks with her mother Kristen Carrigan before the game on Saturday, Oct. 22, 2016 at Memorial Stadium.

The University of Kansas announced Monday a contract extension with head football coach David Beaty to keep him in place through the end of the 2021 season.

While the new deal doubled Beaty’s annual base salary to $1.6 million beginning in 2017, with that amount increasing by $100,000 each year he remains at KU, the contract also includes a number of incentives.

Per the contract obtained by the Journal-World the following is a list of scenarios that would pay Beaty additional money: 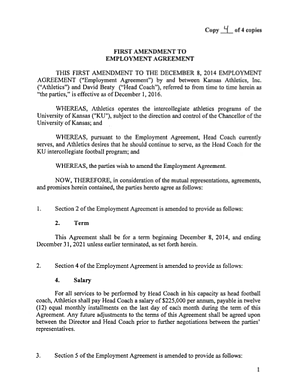 The contract also includes details on how a termination would play out for Beaty and the university. The athletic department can terminate the deal without cause at any point, but if it does, Beaty would be owed $3 million.

Should Beaty decide to leave Kansas before the contract expires, he would owe the university varying amounts, depending on when it occurred. If Beaty left prior to Dec. 31, 2018, he would be responsible for a $3 million buyout. That amount drops to $2 million in 2019-20 and $1 million in 2021.

Benton, could you double-check the article showing the bowls for which he receives 250k and 500k? The same bowls are listed for each.

The buyout for coach all but ensure Beaty will stay through the entire length of the contract. That is unless he's a really hot commodity and a big name school with lots of money pays the buyout for him. Which in that case gives the university extra money to throw at another coach. I think this was a brilliant move and one that needed to be made. Nothing but good things to come for the Fighting BeatyHawks.

What the hell? What a mistake this will be. Is anyone thinking of stealing him away from KU? I know he is underpaid, but let him take us to a bowl game before you add a bunch of years to his contract.

The years need to remain around 5 for the sake of recruiting.

$1.6M is on the low side for an FBS coach, though he would have a competitive salary (with the bonuses) if he "earns it". Seems well played by both Beaty and Zenger.

Benton, can you shed some light on why we are so averse to including offset clauses in any of our buyouts? I seem to recall that Gill, Weis, and now Beaty all have had contracts that included large buyouts, but none of them included an offset, which just put us on the hook for more money when we fired them. I know that a $3 mil decreasing buyout isn't a giant sum for most schools, and I hope that we never have to use it, but question why Zenger isn't mandating that this is included to provide the athletic department some insurance/protection to avoid paying more than we should.

Great point. Answer - b/c that is how Zenger operates. Any other P5 school would have counsel that reviewed the contract and suggested inclusion...maybe KU did although decided against it. Another typical administrative gaffe.