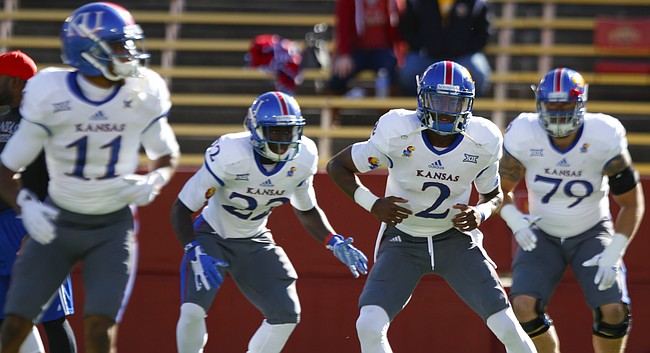 Unless the Kansas University football team can score a major upset in Saturday’s 3 p.m. kickoff at Memorial Stadium against rival Kansas State, the Jayhawks will finish the season winless for the second time in history and the first since 1954.

Kansas State football coach Bill Snyder was a sophomore at Lafayette High in St. Joseph, Mo., when KU went 0-10 in its first season under coach Chuck Mather. Neither first-year Kansas head coach David Beaty nor any of his assistant coaches had been born. Edward Ferdinand Arn was governor of Kansas, Dwight D. Eisenhower president of the United States.

One of two paths is available to the 2015 Jayhawks to avoid being labeled statistically the worst KU football team in the 115-year history of the program: The Jayhawks can either score the upset or lose to the Wildcats by one point. The latter result would mean KU would have lost its 12 games by an average margin of 28.3 points. Losing by two computes to an average loss of 28.42 points, .02 worse than 1954.

Regardless of the outcome, Kansas will enter 2016 with 38 consecutive losses in games played outside of Memorial Stadium, including three losses to Missouri at Arrowhead Stadium, a neutral site. An upset victory would enable the Jayhawks to improve their record to 4-56 in their last 60 Big 12 games, which of course is another way of saying a loss would drop it to 3-57.

KU ranks last among 128 Football Bowl Subdivision teams with 46.2 points allowed per game and last with 578.8 yards allowed per game. In recent weeks, the offense has performed worse than the defense, and for most of the season the special teams have been anything but.

Kansas State (4-6 overall, 1-6 in the Big 12) has a six-game winning streak in the series that dates back to 1902, but KU still leads the series, 65-42-5. The Wildcats have scored at least 51 points in four of the past five games in the series and are motivated to win their final two games in order to gain bowl eligibility.

So what I’m trying to say is, Kansas has got a shot.

this is what happens when you keep firing the head coach every season. I hope they give Beaty a chance, he may be able to turn this thing around.

I imagine Zenger's job security is tied to the duration and success of Beaty's tenure, at least on some level. Beaty will get his due time, and deservedly so.

KU has not fired the head coach "every season." Gill was there for two years and Weis was there for 2.33 years. The rationale was soundly logical - they both were terrible coaches, and the Weis hire really decimated the program. I still wonder re accountability in the administration for that hire. Made absolutely no sense, from personnel decision, to past coaching record at ND, to recruiting, everything. Someone posted on this site quite a while ago with apparent knowledge of the situation that Zenger realized he made a mistake only a few months into Weis' tenure (spring 2012 practice?). To allow the program to get to this point is absolutely inexcusable - especially after what we already endured with Gill's tenure. The damage done to the "Kansas University" brand has been substantial. Beaty said so himself in the ESPN article re the smallest scholarship roster you could have without the death penalty. It was done by the University itself! The University administration needs to get real and stop living in a one-dimensional, basketball-only world in Lawrence. That also damages the brand. The rest of college athletics is passing KU by...football is the engine that drives the growth and profitability of the rest of the athletic department. I have never understood why this was hard for them to understand, and likely never will understand.

btw I will say to those that long for days of Mangino yore, I doubt he would have had much more success given the recruiting dropoff which happened in 2008 and 2009. He likely would have hung around through 2010 then been let go. Some of his key assistants were leaving and going elsewhere anyway (ie, Young, Warriner), who were the real drivers behind KU's Orange Bowl success.

someone that makes sense. thank you.

Zenger made a horrible choice when he hired Weis, but other than that, what are you talking about when you say the administration needs to get real???

They've put a tremendous amount recently into upgrading the facilities, including a top-of-the-line weight room, so they're clearly "getting real" about supporting the football team. Making a bad decision has no connection to whether or not the support is there for building a winning program.

Alumni generously stepped up (thanks Kivisto, Anderson and Ward families, and others) and supported the program and the university with the facility improvements, which were positive and needed. However, the manner in which Mangino's departure was handled, how it cast a long shadow over the 2009 season (intentionally IMO by Perkins), the botched hires (and contract structures) of both Gill and Weis and their attendant aftermath do not align with the program vision associated with the facilities upgrades and alumni donors.

oh I'm sorry (every two years) might as well be firing them every season, it has the same effect. We never even got to see what Turner Gill could do, he had some quality wins - Georgia Tech, Colorado.... KU didn't give him enough time to get his own recruits. Sounds like he had Seth Russell on the hook before he was fired, but who knows if he would have actually come here. Gill wasn't a great coach, but he sure did more than Charlie did.

We all were more than warned that this would be a tough season. Although I hate losing, nothing has been much of a surprise this season. We need to just take it a day at a time and slow improvement will happen.

K-State has had 8 of them. Three times they’ve done it back-to-back.

To everyone that wanted Mangino fired back in 2009....this is what you asked for. Don't say that some of us didn't tell you this would happen.

Nobody "wanted" Mangino fired, except our inept then-AD. But his continued success at KU, had he not been let go, is hardly a given. He had but one truly magical season--and has since had almost no success anywhere else. The same can be said of us, but that's on Gill (a good recruiter but poor overall coach) and especially Weis (disastrously bad at everything). I'm sold on Coach Beaty and his staff. They'll turn the program around.

I am not sold on anything, but I believe Beaty deserves a chance.

Gill was a great recruiter, so with a couple of good coordinators, we may have become relevant. Weis and his ego wouldn't have allowed any coordinators to succeed, and his recruiting style was too old fashioned to work at KU.

After seeing some on-the-field decisions, I think Beaty, may be able to get us back to winning a couple of games every year after a couple of years, but we do need a name brand coach to bring us to a top 10 level, with the recruits that he can draw.

You could have put Nick Saban in charge of this team, and it would still probably go 0-12.

So Mr. Keegan, you're telling me there's a chance?

"Or any other of the student sports teams at KU??"

This is a totally different issue, and I have noticed it a lot more this year with many football teams.

What is with the rotating different uniforms for each game?? It must cost a fortune to outfit the entire team with different duds for each game. Aren't ticket prices outrageous enough??

Baylor seems to have the most different designs of uniform in their closets.

Anyone have a line on this??

Maryland started midnight madness..Georgetown, Kentucky, Davidson, Michigan State, Florida, and many many others, yada yada yada.... But it kills football teams? I don't see how?