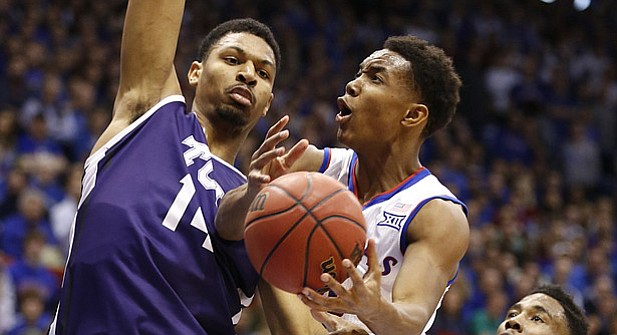 Kansas guard Devonte Graham (4) gets to the bucket against TCU center Karviar Shepherd (14) during the first half, Saturday, Feb. 21, 2015 at Allen Fieldhouse. At right is Kansas forward Jamari Traylor.

Thursday update: Injured KU forward Perry Ellis will sit out against TCU, according to coach Bill Self.

Those folks who figured Kansas University forward Jamari Traylor wanted to play Kansas State instead of TCU today in the quarterfinals of the Big 12 tournament figured wrong.

“If that guy was suiting up, maybe I would (want to play KSU),” Traylor said. He was referring to the K-State student who charged into him, seemingly on purpose, when storming the court after the Wildcats’ 70-63 victory over KU, on Feb. 23 in Manhattan.

“I don’t like that guy, but it’s all good. I take on average probably a fall worse than that (court-storming bump) in the game anyway. It’s all right,” he added.

Perry Ellis (right knee sprain), who practiced with no discomfort on Wednesday while listed as questionable for today, scored 23 points off 9-of-10 shooting, while Devonté Graham had 20 points off 7-of-7 shooting in the win over TCU in Lawrence. That’s the feel-good game in which KU team manager Chris Huey entered and played in the final minute of a close contest.

“TCU is one of the toughest teams we’ve played on the defensive end,” said KU freshman guard Kelly Oubre Jr. “They go hard and crash the glass. Rebounding is going to be key.”

“They are so much improved. Trent (Johnson, third-year TCU coach) and his staff have done a great job in a short amount of time recruiting a higher-caliber athlete and getting those guys to guard and play together,” KU coach Bill Self said.

Ellis recovering: KU junior Ellis, who missed Saturday’s loss at Oklahoma because of his sprained knee, practiced pain-free Wednesday both in an hour workout in Allen and a 40-minute shootaround in Sprint Center, Self stated.

“He looked good today,” Self said of Ellis, who wore a knee brace at practice and will wear it in games. “He didn’t really move around much over here (at shootaround) by design. He practiced the full practice (in Allen). He went about 50 percent of practice yesterday. If he’s got pain, which he didn’t have today, we’ll hold him. If he doesn’t, we’ll put him out there. A lot depends on that and we won’t know anything until tomorrow,” Self added.

Ellis would like to play and Self sees the value in playing.

“It’d be nice in a perfect world for him to be able to play because he’s going to play next week (in NCAA Tournament),” Self said. “You want to get out there and at least get hit and know you can get up and stuff. If it doesn’t work out to be a perfect world, we’ll just work him hard Sunday, Monday, Tuesday and Wednesday and get ready for next week.

“He wants to play, no question. Depending on his movements, depending on him being honest with the doctors, that will determine whether or not he plays because his want-to level is very high. You can’t put him out there if he’s in jeopardy at all.”

“(There’s) no new news on Cliff whatsoever. That’s all holding steady, unfortunately,” Self said, noting Alexander, “has probably practiced better than he has all year long. It’d be nice to get him back. It’s out of our hands. I’m not asking every day, ‘Where is it?’ There’s no reason to. There’s been absolutely no movement.”

“If I was on the committee I’d say we’d be the fourth 2-seed. If you look at the 3-seeds on ‘Joey Bracketology’ then you could see the 3-seeds could easily jump us, primarily if they play well in this tournament and we don’t,” he said.

Strap it on guys! TCU is not going to be an easy win. They are way better than their record, and in my books one of the more dangerous teams in the conference. Hawks need to block out and get some big-time rebounds, and make the offense work as it should. GO HAWKS!!

BTW, looked at the conference tournaments bit on ESPN, and guess what Misery's record is now??? 9-22!!! Sad days in Columbia!

Nope. 9-23. Frank Martin's Gamecocks put them out of their misery.

The fourth 2 seed would mean we would be in Kentucky's region. Does Self really want to play UK again? As a competitor, I would think he would, but why not wait until we get to the final four to play them. If I wanted to be in any #1 seeds bracket, it would be either UVA or Gonzaga. UVA has a stifling defense but almost no offense. The Zag's on the other hand are almost like Peyton Manning's old Colts teams : dominant in the regular season but once the playoffs start their, true colors show.

Ummm...that concern would become reality IF, and only IF, we and UK make it to the Elite 8, right? I am going to consider it a success if we make it to the Sweet 16; anything else is gravy...

Exactly. I would be thrilled to play Kentucky again.

Obviously, I'd rather not. But a game against Kentucky means good things have happened for KU in the tournament.

From what i have read, the standard S curve isnt necessarily going to deteremine what #2 seed plays what #1 seed. It used to always be the best #1 seed got the worst #2 seed in the their bracket. Now they are more worried about geography than the S curve. Every single article i have read has Wisconsin in with Kentucky. I know Joe Lunardi doesnt think that will change either unless Wisconsin would work its way up to a #1 seed. Not saying it is right but it sounds like geography will play a much bigger factor. I think i would rather drop to a #3 seed than play in Kentucky's region. Of course, if you are playing Kentucky as a #2 seed that means you have made it to the Elite 8 at least and an Elite 8 run with this group would be a great year IMO.

Had no idea about the S curve opinion. I've seen Wisconsin in UK's region as well with KU being in either UVA or Gonzaga's region.

We are currently in UVA's bracket. Because we are a 2 seed, they will give us some preferential seeding due to location.

(1) If Perry Ellis can play, let him play; but don't start him. Give him a chance to get back up to speed and see how he does before putting him back in the starting lineup.

Here's the deal, if Ellis knee is such that he can't play 1 week will not make a difference!

My thought is...let's make sure that Perry is COMPLETELY healthy for a run in the NCAA Tourney... we don't hang banners in AFH for Big 12 Tourney Championships (do we?) only Conference Championships & NCAA deep runs....prioritize....