Kansas University senior Perry Ellis participates in a drill Tuesday, June 16, 2015, during a Bill Self Basketball camp at KU.

Always-polite Perry Ellis smiled Sunday, agreeing to humor the media when asked why he has decided to grow a beard this offseason.

Could it be in support of LeBron James, the facial-haired Cleveland Cavaliers phenom Ellis teamed with in a pick-up basketball game last July in Las Vegas?

“No, it’s just something (that) started to grow ... something new,” Ellis, a 6-foot-8 Kansas University senior forward from Wichita, said after signing autographs for 21⁄2 hours at Bill Self’s Basketball Camp.

Though Ellis looks a bit different, his effort and productivity at World University Games practices have closely resembled that of last season, when Ellis led the Jayhawks in scoring (13.8) and rebounding (6.9). 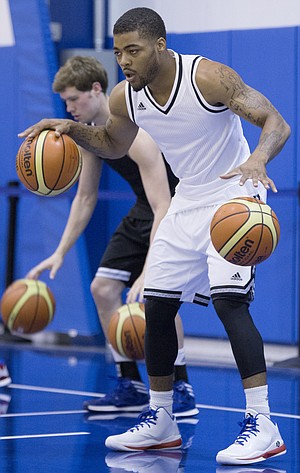 Frank Mason participates in a practice at a Bill Self Basketball camp Tuesday, June 16, 2015, at KU.

“Perry has been our best player so far,” KU coach Bill Self said. “I think he’s ready to have a breakout type year, a player-of-the-year-type year.”

Ellis, who said he has completely recovered from the sprained knee that slowed him the last six games of the 2014-15 season, has been spending a lot of time in the gym.

He has been working on some of his perceived weaknesses “(My) ball-handling is getting a lot better in tight situations. I’ve been shooting a lot, extending my range even more, those two things,” said Ellis, who hit 45.7 percent of his shots as a junior, 39.1 percent from three (18 of 46).

He said the first week-and-a-half of University Games practices has been productive.

What’s most important to get out of numerous practices, two exhibition games against Canada (next Tuesday, and a week from Friday in KC’s Sprint Center) and eight games July 3-14 in Gwangju, South Korea?

Asked which one player has made the most improvement this offseason, Ellis paused and said: “Landen (Lucas) is doing well. Everybody pretty much came back and is doing real well, honestly. We’ve been playing great in practice as a team. That’s what’s key.” 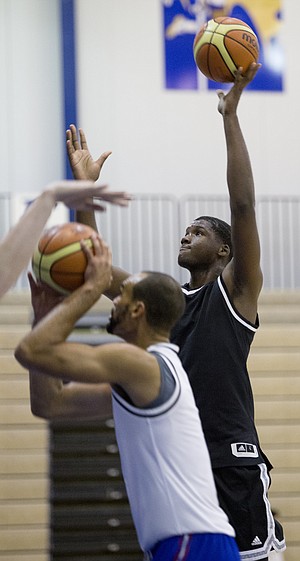 Kansas freshman Carlton Bragg participates in a practice at a Bill Self Basketball camp Tuesday, June 16, 2015, at KU.

He agreed with those who have compared newcomer Bragg, 6-9 from Cleveland, to Ellis.

“Definitely. He is a real skilled player, strong, pretty quick, quick on his feet also,” Ellis said. “I definitely see some similarities. He is learning real fast. He’s starting to get more comfortable. I can see it as time’s going on. I’m excited to see what he does.”

“We’ve got a lot of guards. That’s really going to help us with pressure situations,” Ellis said. Guards Sviatoslav Mykhailiuk (not born in U.S.) and Brannen Greene (injured) cannot play in the games but can play for KU in 2015-16. “It’s going to be cool to see how we play that way.”

Self has said he is going to play all his players about the same amount of minutes. After all, a long season follows this summer’s Games.

Ellis’ minutes will not have to be monitored, however, because of any lingering effects of his knee injury.

“I’m 100 percent. My knee feels great, no problems with it anymore,” Ellis said. “I’m happy about that. It got better pretty fast (after season). Just rest, a lot of rest helped. I’m back.”

Self is happy Ellis decided to return to KU a final year and not declare for the NBA Draft. He does think the NBA is in the future for his senior standout.

Ellis wants to play in the NBA, but stresses he is extremely “excited” about being back for a final go-around.

“It’s the goal. You can’t rush it. You’ll know when the time comes. It hasn’t come yet. I’m glad to be here,” Ellis said.

KU guards go through drills at Bill Self camp by KUsports.com

If Ellis puts in the year we all want him to have, he will be one of the most loved Hawks of all time. A healthy Ellis is the buy I'm super fired up to watch this year! I hope Ellis is working on a higher release on his jump shot. Those 6-8 games before his injury did not show many weak spots in his game.

not sure what Selden is thinking out there or if he's hurt or something, but didn't look like he was putting much effort into the drills. Not good body language from the junior guard.

I think if it were a huge concern or showing a negative light....... they wouldn't have put up the video. Something tells me that if Self saw something, he would have addressed it with Selden. The kid has put in max effort since he's been here, I doubt effort is what we need to worry about with him. Just my opinion.

I didn't notice it so I went and rewatched the video. You have a pretty sharp eye but it just looked like he was slightly bored - don't know but it didn't stand out that much. What I did notice was the sound of the nets as the ball ripped through.

Svi looks MUCH stronger this year! The first couple of times i saw him in the video I couldn't figure out who it was! Excited to see him play this year!

Yes he does Alex. He has really filled out his frame.

I doubt 6.9 rpg will be enough to lead the Jayhawks this year. Perry might still lead the team but expect Diallo to challenge him.

Wow, I just read through this entire thread and didn't read a single post about how disappointing our players have been/are/will be, and how delusional we are for expecting another great year from our team. Love it!

Even the Negative Nellies don't show as much of their ignorance as we've come to expect. Live and Learn isn't such a bad approach.