Reaction to KU being selected to represent the U.S. in 2015 World University Games

Kansas University men's basketball coach Bill Self, athletic director Sheahon Zenger and Dr. Craig Jonas, the deputy head of the USA Delegation for the World University Games discuss KU's selection as the team to represent the United States in the 2015 event in Korea.

KU junior Perry Ellis reacts to the Jayhawks being chosen to represented the United States in the World University Games in 2015 in Korea. 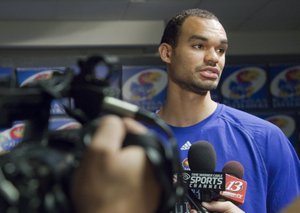 Kansas University junior Perry Ellis talks to the media, Tuesday, June 17, 2014, about KU's selection as the team to represent the United States in the 2015 World University Games in Korea.

Kansas University basketball’s standing as one of the top programs in the country was one of the biggest reasons the Jayhawks were chosen to represent the United States in the 2015 World University Games in Korea.

“We went through a pretty strong, long process to find the most appropriate team and Kansas was a great fit,” said Craig Jonas, the deputy head of the USA delegation in charge of selecting the representative, during a news conference Tuesday at KU. “When you walk the halls here, you realize what a great tradition Kansas has, and we’re ecstatic about having them there.”

The U.S. International University Sports Federation’s choice of a complete college hoops squad was a change from years past, when American all-star teams were sent to the Games.

Asked about the specific criteria that set KU apart, Jonas pointed to the Jayhawks’ five-year record — No. 1 in all of college basketball — plus preseason rankings, expected returners and last year’s RPI. A smaller, more speculative factor also played a role.

“There’s always the intrigue of how will a cohesive college team do versus an all-star team that’s only been together for a couple of days,” Jonas said. “So it’ll be a fun experiment if nothing else.”

KU coach Bill Self, who recently has started to dabble more and more with recruiting international players, said he and his program were thrilled to be picked.

“I just don’t see anything but positives,” Self said. “When we were approached initially, I was like, ‘Well that would be too good to be true.’ It’s not even from a competitive advantage standpoint but from an advantage of representing our country in such highly competitive games against the world. I don’t believe there’s an amateur tournament in the world that we could play in that we could get this type of competition.”

Added junior Perry Ellis: “It’s an honor that they decided to pick us and we’re all really gonna take ownership of it and do the best we can. It’ll be a great experience for us to go down there and play against all of these pro players.”

In addition, participating in the 2015 World University Games, which will take place July 3-14, will allow Jayhawks to spend unlimited time practicing together in the gym, beginning in June of next year.

“We’ll be working with our guys and treating it like a preseason type situation, getting ready for our first game,” Self said. “It’s pretty exciting, and I think everybody in our program should be jacked about it.”

KU will be able to take a roster of 12 players on the trip. Because of the uncertainty of one-and-done players these days, that might leave a couple of holes.

“We could potentially take ex-players as long as they’re enrolled in a class,” Self said. “If our roster is 12 that would not be an option, but if our roster is 10, we could literally have tryouts of ex-KU players to see who best fits our team to give us a better chance to have success over there.”

Because the Jayhawks will be representing the United States, no foreign-born players will be allowed to join the Jayhawks in Korea.

That means no roster spot for KU newcomer Sviatoslav Mykhailiuk, who hails from the Ukraine and is expected to report to campus later this summer.

“Sviatoslav will be playing with his Ukrainian team,” Self speculated. “If you’re not American-born you’re not eligible to play for the USA Team. If you were to look at one negative, that would be the one negative, that we could not have our entire group of guys together, potentially, but that’s a very minor thing.”

KU athletic director Sheahon Zenger said the cost of the trip would be split between KU Athletics and Basketball Travelers, Inc., which helped select the Jayhawks.

Regardless of the final bill, Zenger said the opportunity to have KU, both as a university and a basketball program, represent the country in something as special as an international event was well worth it.

“We’re all so proud of our history and tradition here, and this just allows us to put that out there on the world stage,” Zenger said.

Unlike past international trips made by KU, such as to Canada in 2004 or 2008 or Paris and Switzerland during the summer of 2012, this experience will be a much more hectic event. Games will be closer together, scouting reports will have less time to be executed and rest will be tougher to come by.

“A lot of these teams treat the World University Games as kind of the training ground for the Olympics or the World Championships,” Jonas said. “So they’ll be sending very, very strong teams.”

Now this is some REALLY neat news. This is a huge event for KU Athletics. Excepting some folks who live around Manhattan and within the Missouri border, you'll probably have the entire country rooting for us. And the extra practice time...that can't be discounted. That's a huge deal.

BIGGEST bonus of all: Unlimited practice time in the summer, as a team. Huge competetive advantage for the '15-16 Jayhawks as they prepare for the Div.1 season--> probably the 'readiest' Bill Self team you'll ever see, except for maybe the 08Champs...

Love the idea of sending an actual single college team, as long as whatever school has a well-balance roster of size, athleticism, and coaching. Of course I'm thrilled they picked KU, as it is most representative of the spirit of a college team. (As opposed to KY, while a great talented roster, the "feel" is that its a preNBA stop-over). UNC has been lackluster of late, internal strife. Duke is a possibility, and I bet finished among the finalists. I'm not sure if Syracuse factored in, as I dont know if international rules permit zone D or not? Michigan State could be another strong college team, but not sure how their '15 roster looks compared to KU's, as that was obviously one of the criteria.

Agreed. When I read that they would have unlimited practice in the month of June that was a shock. I was expecting something more like 40 hours of practice in the 2 weeks leading up to the trip.

Good luck to the Kansas University Travel Office trying to put together travel packages for the fans. I've been checking out the venue, Gwangju, for these games. Other than the basketball games, I can't find anything of interest to do there. Plus it looks to be extremely expensive. Past venues have been more appealing, i.e. Paris, Bangkok. Beijing, Izmir (Turkey);;;etc;

I wonder if one of the factors to pick a team was due to a venue that was of little interest to attend.

Rent a yacht off Mokpo, 15 miles away, do it up nice like Leonardo DiCaprio is doing at the World Cup. All you need is access to a sheikh it looks like. There is national park, deep sea fishing, lots of scuba areas... :)

I think I'm gonna make that trip. Then back to the Philippines to visit friends. It is right on the way. And then I'll be broke! LMAO

It sounds like players could still be eligible even if they declared early - tho not Wigs and Jojo.

Ben would be? TRob? Others?

In the previous article Self had said that players who declare early for the draft next year wouldn't participate. I didn't listen to the interview, but I assumed that that was a rule that Bill Self was setting. I doubt that anyone who declares for the draft would be able to attend anyway, because of pre-draft workouts, and NBA summer league. But if it is Self's rule, he is undoubtedly also using it as a carrot to encourage some late first rounder possibly to return for another year and a chance at another championship.

You telling me if JoJo said I want to play and is taking a summer class HCBS will say no? I am not buying that one yet.... but we will see ....

JoJo can't play for USA, not born here, that goes for Wiggs as well.

There's a limited crop of 90's born early draft entries in the past few years excluding the most recent two OAD.

Tyshawn, EJ, Withey, Releford were all born in 90, but they all graduated... Still could go back and take classes I guess... I wouldn't be surprised to see Tarik come back. I can't find Kevin Young's age, but I think that he had previously tried out for the Puerto Rico national team.

This is the confusing part. We were told 17-24, but it has to be non - professional right? If wiggs and jojo aren't eligible why would ben or t-rob be? I'm thinking it will be more like releford or tarik on the list of candidate we are looking at.

I didn't listen to the interview, but I think that the non-professional rule was something that was made up in the comments section. Stipulations are that they are US born between Jan 1, 1990 and Dec. 31, 1997 and are enrolled in the university.

It was reported in the previous article that players who declare early for the 2015 draft will not participate in the WUG, but it didn't state that they were ineligible to participate. I believe that Self had said that indicating that if Oubre, Cliff, and Selden go pro next year that they will not get to join the team for the trip. They will likely be too busy anyway.

I guess the presser contains the answer to roster additions: any US born jayhawk that will be 25 or under at the time of the games as long as he is enrolled in a class at KU. That opens it up a lot more than I thought. There have always been some early departure players that have come back in the summer to finish their degree, so this could be a decent list to choose from.

They should wear Team USA jerseys with a Jayhawk on their backs where their name would normally be. They should also randomly assign numbers for the tournament given the short time for scouting between games. Especially internationally, why label them with a relatively easy English name on their backs or the number they normally wear and will be wearing in the game tapes they have on us? Much more tape than is available on them.

Too bad Tyrel Reed was born in '89, if he was still at KU med it would be a ridiculous addition.

You misspelled your first name, Juice.