Former Jayhawk Naadir Tharpe, who was on hand for the event, talks dunk strategy with Ben McLemore during the Sir McLemore Summer Slam at the Community Building on Saturday, July 26, 2014. 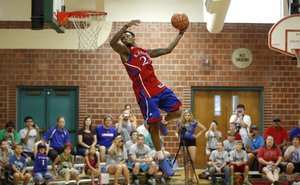 Tharpe, who left KU this spring with the intent to transfer after three seasons with the Jayhawks, recently decided to forego his final season of college eligibility to turn pro instead.

Saturday, he explained that becoming a KU graduate and finishing what he started, academically, played a huge role in his decision.

“That’s why I’m back here now,” Tharpe told the Journal-World. “So I can figure out how to get started again, whether it’s online classes or whatever. The reason I came to this school was because of the dudes before me, and I’m appreciative of everything that happened to me here.”

Tharpe currently sits 22 hours shy of graduating and has talked with his former advisers at KU about finishing his education in Lawrence. Had he elected to transfer to another school, he could have lost some of those hours and further delayed the process of finishing school and turning pro. What’s more, he would not have been officially recognized as a KU graduate.

The Worcester, Massachusetts, native said the whole process has been tough to sift through but added that he feels good about the decision he made and is looking forward to trying out for the NBA’s D-League in the coming months.

“You play three years at Kansas under coach (Bill) Self and the guys that were around me, I feel like the (D-League’s) going to be a different type of adjustment, but I don’t think there’s anything tougher than being here.”

While Tharpe would like to get his professional career started in the NBA’s minor league, he said he had no aversion to heading overseas if that’s where the future takes him.

“Right now I’m at a point where basketball is what I do for a living,” he said. “If that means I have to go overseas to provide for my family, that’s what I’ll do.”

As for his personal life, which was turned upside down last spring after a risqué photo of Tharpe and a woman surfaced on the Internet, things are good there, too.

“Everything’s going really well, actually,” he said. “It was hard, only having one more year under my belt, but at the end of the day I had to do what was best for my life.”

Did Naadir leave on his own terms, or was he forced out? I suppose we will never know, but I do know that he couldn't compete with the best speedy guards in the NCAA. He impressed on many occasions and won many games for KU, and for that, KU fans should always be grateful. But we should not forget, that Devonte Graham's decision to come to Lawrence depended solely on whether or not Naadir was in Lawrence or not. I wish Naadir the best, for him and his family. If he can improve his decision making, he can be an NBA player. That being said, I honestly believe that Europe might be his best option. I wish you all the best young man. Work as hard as you can. Rock Chalk.

Yes, Tharpe was forced out.
No, he's not an NBA player. Even w John Stockton's decision making, he's not.
Tharpe should sign the first contract that is put in front of him and not look back.

I hope he can complete the 22 hours for graduation. I'm not sure how Kansas or the NCAA handles situations like this but it seems the school should assist for him to finish.

Tharpe was one of HCBS failures. Self had hoped he would find another Russell Robinson type of player in Tharpe and ended up with a player with less than adequate quickness and a fragile psyche. He could on occasion have good games but in the long term he was not the type of PG that KU needs in the program. In a world of what have you done for me lately expectations the only way KU could hope to return to 30 wins and NC games is with a more assertive and physically quicker PG. Tharpe just didn't measure up as was evidenced by his play last season and he didn't make it easier on himself with his off the court issues. Tharpe does have the honor of claiming the he was a Jayhawk and played in some great games however he never was the star PG that the program needs. Coach Self found an honorable way for him to leave the team as opposed to just pulling the scholarship or even worse relegating him to the end of the bench which is where he likely belonged.

I'm not thrilled if he was pushed out, but I do agree his sitting on the bench next year was not a great option either.

So, first he transfers to be closer to his daughter, then he decides to go pro, now he is checking on classes to graduate this year at KU, but is technically not a student at KU. For those wondering if he was forced out, let's read between the lines and just call it like it is. I wish him the best in getting his degree, and hope he does get to play over seas.

Yeah, "reading between the lines" is always a brilliant method of understanding a situation ~ and, tell me again just why this issue is so important?

It isn't. I was just stating the obvious, and I wish him the best next year and in his future endeavors.

Glad to see some people sticking up for Tharpe on here. I had held off on signing up with FB on here to make comments for a long time, but caved. Tharpe was huge in winning the B12 last year, as in, we don't win it without him at the helm period. He was clutch at the end of a several games to close them out or snatch victory from the jaws of defeat. My expectations for next season dropped when he left, bottom line. For the following year they should be higher, but it hurts KU's chances next season. That statement being based on him not having too many off-court distractions, maybe there was no chance that would be the case. He probably won't see the NBA, hopefully he has some success in the NBADL and is able to make some decent money at some point overseas. Keith Langford is possibly the best SG KU has had since Rex Walters (hopefully Selden makes a run at that statement next year?) and it has worked for him. He should definitely be a KU alum when it's all said and done, and it's too bad we won't get a senior speech from him. KU fans should be careful. One year they are complaining that Tharpe should have played more instead of EJ, the next year they are complaining that Frankamp should get the minutes instead of Tharpe. Grass is always greener apparently. Need to stick with the players that have put in the time and effort to be leaders.

Best wishes to Naadir Tharpe. Learning from tough lessons and perseverance will serve him well. I hope he gets/earns his KU diploma.

I wouldnt necessarily call Tharpe a "HCBS failure", but more rather a "plateaued player despite Self's best efforts". Self isnt as clairvoyant as we'd like to think regarding talent, but he most definitely is better than almost all D1 coaches in the judging of talent potential. The other thing that is abundantly clear about Self is that his player-development timeline absolutely takes longer than 1 season, and I'm OK with that. I like to root for our guys longer than just 1 year.