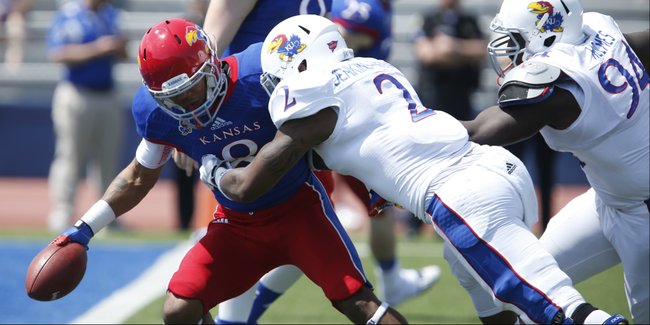 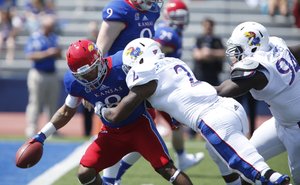 Marcus Jenkins-Moore’s career as a Kansas University football player will end without a regular-season appearance.

“Marcus asked for and was granted a release to transfer and we wish him well in his future endeavors,” Weis said in a statement.

Jenkins-Moore, a 6-foot-3, 230-pound junior-college transfer from Pierce College, red-shirted in 2013 after injuring his knee during his first workout on campus last summer. In his lone appearance in a KU uniform, during this April’s spring game, he made three tackles.

“Thanks to all the KU fans,” Jenkins-Moore tweeted, “but (I’m) sad to say that I won’t be returning to KU.”

Reached by the Journal-World, Jenkins-Moore said details of his departure, which involved issues with some paperwork, escalated quickly and amounted to little more than a stretch of bad luck that began with his injury.

Despite having to say goodbye, Jenkins-Moore said he appreciated the chance to come to KU.

“This was my first visit and I committed here,” he told the Journal-World while packing up his belongings. “That shows you how much I loved the place. This isn’t the first time that adversity struck my life. I met a group of guys out here that are just trying to win. I respect those guys more than anything. I’m not sour. It is what it is.”

A three-star prospect who chose Kansas over offers from a dozen other BCS programs, Jenkins-Moore never really factored into the mix on KU’s defense. His position appeared unchanged heading into this season.

At Big 12 media days Monday in Dallas, Weis was asked about Jenkins-Moore, as well as a couple of other junior-college transfers who came in with the self-dubbed “Dream Team” but did not play in 2013 for one reason or another.

“I saw a lot more out of (Andrew) Bolton and (Kevin) Short than Jenkins-Moore,” Weis said, “Because Jenkins-Moore had a knee (injury) that’s taken the whole time just to recover. Jenk came in as a dynamic pass rusher, but I still think that he’s a ways away at this point.”

Jenkins-Moore follows former Pierce teammate Marquel Combs out the door. Both were highly touted juco prospects who wound up not making an impact at Kansas. Combs, the former No. 1 juco prospect in the country, elected to leave KU last September, shortly after the 2013 season began.

Jenkins-Moore said things were too fresh for him to know what his future held. He added that he already had reached out to a few programs and would likely drop down a division so he could play immediately, since he burned his red-shirt year by sitting out with the injury last season.

Weis spent the better part of the day Thursday at the ESPN studios in Bristol, Connecticut, promoting Kansas and the Big 12 as part of a two-day “car wash” that featured nine of the 10 Big 12 coaches.

Weis participated in a mixture of interviews with more than 25 different shows and writers across ESPN’s television, radio and digital media platforms. KU’s third-year coach also mingled with St. Louis rapper Nelly, who, according to ESPN’s Brett McMurphy, claimed Missouri as his favorite college football program but admitted to liking Kansas basketball.

KU senior Ngalu Fusimalohi, who started all 12 games at left guard for KU in 2013, has been named to the 2014 Polynesian College Football Player of the Year Watch List by the Polynesian Hall of Fame.

Well, it wasn’t exactly a glowing recommendation by Weis.

We had 20 guys come in and it's a Crap shoot. In reality half typically pan out for juco transfers, and so far it's been around that number. Next story, let's get the season started.

"Involved issues with some paperwork...and amounted to little more than a string of bad luck..." It doesn't sound like it was a football issue, per se.

Not surprised he was going to have a hard time getting on the field with the group KU has coming back.

Why don't we play Missouri? I love beating them.

Thomas, Bolton and Short are still on the list of non-contributors to this point. Fondal, Coleman and even Smithburg have had minimal impact thus far.

That leaves 6 guys out of the group who have had an impact. Still not too bad. Especially considering 3 of those guys received conference accolades last year.

The thing that bugs me is that of the 4 departures, 3 of them were the guys I was most excited about. Combs MJM and Faifili.

Not much he could do about Martin. I also believe Combs cleverly masked his bust potential with all the talk.

Christ, Ragone and Heaps were guys I think he truly believed in. At that point he was still certain that 5 stars and his pro-style offensive genius would translate into a struggling college program.

But while I’m still not sure he knows what he’s doing at the college level (from a recruiting standpoint), he is learning that the right coaching personnel and system can make him LOOK like a better recruiter.

Reggie does what he does with the RB’s. Campo has his mid-level secondary recruits playing at a high level. Bowen has a defense of mids playing better, now it’s Reagan and Kiesau’s turn to elevate the play of their mids and we should be on our way.

Voila! Weis gets to remain a genius.

Wasn't Smithburg the starting RG most of last year? Not quite as nice as if he'd have been able to long snap. but solid none the less.

Apparently there at Pierce Community College...... they don't like to put in work for their spot on the field. Seems like the coaching staff there might want to put a little more emphasis on work ethic. This sounds like a I'm not going to start so I will leave situation to me.

Two jucos left because they weren't good enough to get on field and one got arrested. JM hurt his knee I don't know what the recovery time was for that but while he was rehabbing others were getting experience on the field and stronger in the weight room. He still has two years to make an impact but if he's not going to play I understand him wanting to leave to play elsewhwere. He said KU gave him a chance well then why not repay them by earning a spot on the field. But he is behind the 8 ball anyone with a knee injury takes at least two years to get back to where they were and that would leave him with only one year. Sad to see KU sign guys that look promising only to see them leave without getting on the field.

Nice to see that KU is not making leadlines the way Texas TA&M are. At least KU players are transfering not getting suspended or arrested for sexual assault. One positive way to look at it. Chris Martin is the only one I can think of and that was last year and his was for robbery. Not that that is ok.

Weis is gone after this year anyway his Hail Mary switch on offense won't help or be too new to be effective it might take a couple years before the team and personnel are comfortable using it. You can't just change the philosophy and expect immediate results. So we will be back to square 0 by next year :(

Weis will coach out his contract at the very least. This isn’t a hail Mary switch on offense either. It’s a smart and solid move. He made the defensive change last year and we saw some improvement. The changes this year are enough to warrant some faith in his desire and ability to build a winner at KU.

Zenger sees this, and he’s not a knee-jerk guy anyway. See: Bonnie Henrickson.