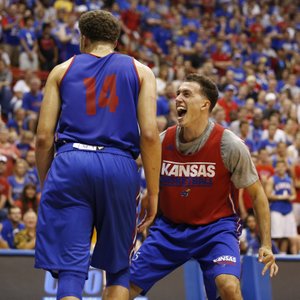 Christian Garrett, a 6-foot-3 senior basketball walk-on at Kansas University, shot through the lane and, despite being closely guarded, scored over 6-foot-6 Kentucky starter/future NBA player Andrew Harrison in late May in one of former NBA coach John Lucas’ workout facilities in Houston.

At least one national media member admittedly was a bit surprised to see Garrett — who has played 53 minutes total in three full seasons — holding his own against Harrison and other major-college starters at the Lucas camp.

Why would Garrett spend his own money on camp fees, plane fare and hotel costs at Lucas’ camp despite the fact prospects for playing time again appear impossible at KU — a program stocked with scholarship players at Garrett’s wing position?

“Two-fold,” Garrett said “Obviously, I love this game, and I want to play this game even after I’m here (at KU), so I’m going to work on my game and continue getting better, even if I’m not playing. The other thing is, one of my goals personally is to play and help this team win on the court and do what I can do well (in games). It’s something I’m going to keep working at. I’d rather work my butt off and miss than just chill and never even know.”

Garrett — he averaged 14.0 points, 7.0 assists and 6.3 rebounds his senior year at IMG Academy in Bradenton, Florida — plans to return to Lucas’ camp in August once he completes KU summer-school classes.

“It’s a great opportunity, great competition, great training,” Garrett said. “For me it was great to just get away, be by myself, have my own room and really just focus on basketball, to be able to play kind of free.

“I’ve learned so much there, gotten so much better here (at KU),” he added. “To be able to go somewhere and work on my craft was a great opportunity. I can’t wait to get back.”

KU players such as Elijah Johnson and Tyshawn Taylor have worked out with Lucas in the past and recommended the camp.

“He has different gyms in the area, which he likes to use instead of have his own facility,” Garrett said. “He basically has everybody in there — NBA dudes, people who enter the draft, college dudes, high school dudes and 6-year-olds, everybody. He kind of splits it up by age group. It’s a lot of ball-handling, drill work and a lot of playing 1-on-1, 3-on-3. It’s really competitive.”

“Honestly, I didn’t match up that much with the Harrison twins (Andrew and Aaron). He (Lucas) had them match up with somebody else a lot,” Garrett said. “We did get to play in the thick of things. They are good players. They can play. It was fun, also I know we’ve got a game against them early on (KU vs. Kentucky on Nov. 14) in Indianapolis. It was kind of fun getting a read on them. I know when we play I can kind of tell everybody some of their strengths and weaknesses.”

KU coach Bill Self appreciates the effort of his scholarship players and walk-ons alike.

“Christian has worked really hard. He’s much improved,” Self said of the player who is still seeking his first bucket in a game. He’s 0-for-4 from the field in his KU career.

Garrett, who had scholarship offers from Alabama, North Carolina State and Harvard during his year at IMG, has a network of friends that includes not only KU basketball players but other Jayhawk students as well.

His mom, Cynthia, and stepdad, Roger, who live in Lawrence, host Bible study at their house on Thursday nights during the school year and even into the summer.

There have been up to 100 folks in the house at one time.

“We have athletes, non-athletes, a few non-students, high school kids. It’s cool because it’s people coming from all over,” Garrett said. “We’ve had people from all types of beliefs or stages in their life. It’s about learning and experiencing God. It’s really fun.”

Some of Garrett’s teammates have attended the Bible study.

The sport-management major, who also has experience playing summer basketball overseas for Athletes In Action, has big dreams for his senior year at KU.

“The bottom line my senior year is to win,” he said. “Every single workout, every single meeting, every time we step on the court, every interview we do, whatever it is, I want it to be as successful as it possibly can. This year we really want to make it one of the most special years we’ve ever had at KU.”

Garrett is in no hurry to depart KU, especially with the Jayhawks headed to Korea as USA representative in the World University Games next July.

“I told him (Self) I’ve got to break my leg to get a medical red shirt,” Garrett joked. “It’s so unfair. I will have Evan Manning run over my leg or something so I can stay another year.”

Walkons going to John Lucas' Camp?? Christian Garrett, you sir, are a serious basketball junkie!! That is an amazing attitude, living the dream on your own terms, and being such a positive force on the team.

Hey Coach, could he go to Korea as a team manager??? Grad assistant to the players? Don't make him break his leg!!

Oh so Harvard is offering basketball scholarships now? Do these stories get edited before they're published?

Well, the article says that he had "scholarship offers" not "athletic scholarship offers" from those schools. I agree, it could probably be clearer about the nature of the financial aid package, but it doesn't come right out an day that Harvard offered him a schollie to play hoops.

No they don't , but that just goes to show Christian isn't just a basketball player . Not to mention Harvard has had a pretty good basketball program since Amaker was hired.

Correct, but you also can't receive a "scholarship offer" from Harvard or any other Ivy League school.

Uhh...why not? Harvard can put together a financial aid package and such a package could ideally include scholarships. They could "offer" this to a recruit as an enticement to come to Harvard. Why can't this happen?

Just remember, God will put you where you need to be. He is in control. Let Him take you to the next level.

Except for basketball camps right, since Christian did this on his own, it was his choice to go and to pay for it? Sorry I always get confused when somebody says something like this. There is a role for our will in the course of God's plan for our life. If there is not how can you serve him if you do not make your own choices on how to do that?

I was going to help you understand my post but then thought who cares what you think, you are a waste of time. I am just embarrassed for you Chad. You could not be more wrong in your two comments if you tried and the sad thing is, you did try.

I enjoy these stories about the unsung Jayhawks that we seldom see on the court but work so hard in practice. We appreciate all your efforts Christian and I am sure you will get on the scoreboard early this year. I thought I read that Bill could take any player that is enrolled for the university games. So if Christian goes on for his Masters I think he will be eligible.

I had the same thought regarding the World U Games. I think that Bill Self said that any players who leave college early to enter the draft next season won't be on the team for the WUG. I assumed that this is primarily because instead of practicing with the team in June, they will be preparing for the draft and meeting with teams, and that in July they will be playing in NBA summer leagues.

It's probably safe to say that Garrett is not on the NBA radar at the moment, but if he dreams to continue his basketball career, then next June and July will be critical for him to do whatever possible to market himself to the NBA and to talent scouts around the world. Most likely at the cost of a trip to the University Games because his best way to get his name out there is to have individual meetings and workouts rather than to continue as an anonymous member of a team stocked with future NBA draft picks.

Keith says that "continue playing" does not require an NBA offer.

I don't recall Coach saying that about the team, but the original story about KU representing the US at the games indicated that any US player under 25? could be on the team. That means that several players that left early could be eligible, though it doesn't mean that Coach intends to use any.

Does anybody know when tickets go on sale for the Champions Classic in Indianapolis? That's only a couple hours away from me, and I thought I might try to go. I've signed up for updates on the website and the exchange website, but for months they've been saying they'll "get back to you shortly."