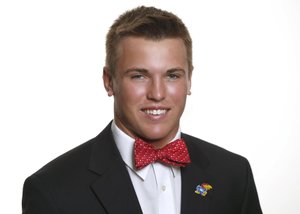 Just as freshman Joe Dineen started getting comfortable at Kansas University’s preseason football camp, his head coach offered him an opportunity that would change that instantly.

The 6-foot-2, 210-pound first-year, hometown safety from Free State High had spent 13 practices learning all he could from position coach Scott Vestal and KU’s veteran safeties. It seemed he was getting it all down, too.

Dineen — identified previously as an emergency quarterback if it ever got to that point — didn’t hesitate when the third-year KU coach asked if he would mind moving to a different skill position. Dineen accepted the offer, went to get his playbook from running-backs coach Reggie Mitchell and began familiarizing himself with his new job.

“I know the basics of running back,” said Dineen, who last played the spot as a junior at Free State, “but obviously with the stuff here, it’s a lot more detailed with the play-calling and everything. Day by day, you’ve just got to get better and better.”

The following days became “pretty chaotic” for him after the roster move. With players such as Cassius Sendish, Fish Smithson, Isaiah Johnson and Tevin Shaw occupying the top two rungs of the depth chart at KU’s safety positions, Dineen didn’t know if he would play this season. A red shirt seemed like a realistic endgame. He could “see the writing on the wall” at safety, but now is in a position to try to add to KU’s running game, along with juco transfer De’Andre Mann and fellow true freshman Corey Avery.

“Obviously with those injuries, very unfortunate injuries,” Dineen said, “just as a unit, we don’t expect anything less from this year. We’ve just got to step up and play now.”

Between the projected top three running backs and dual-threat quarterback Montell Cozart, a sophomore starter, the Jayhawks have a core of young, almost wholly inexperienced players in the backfield. Still, Dineen said the team’s offensive leader, Cozart, is ready to go.

“We’ve just got to catch up with him,” he added.

The newly appointed running back has far more work pending than the other backs. Dineen possesses almost no pass-blocking experience and has plenty of other skills he needs to perfect in a hurry. At practices, when other running backs take reps, Dineen can’t afford to be inattentive. He examines their footwork, how they read blocks and the ways they react to the defense. Playing quarterback his senior year of high school, Dineen did some of that, but now he has to cultivate everything, because the opposition is bigger and faster than he has seen before. In order to get up to speed as quickly as possible, Dineen utilizes some of his spare time to watch extra video and study his playbook.

A team captain who spent most of preseason camp in the same unit as Dineen, starting free safety Sendish isn’t worried about the challenge that awaits the new running back.

“The one thing that stuck out about Joe to me is that he’s very coachable,” Sendish said. “He’s one who’s gonna take whatever the coach asks him to do and put all of his effort, everything that he can, put it all into it.”

“I don’t think the transition from playing defensive back to running back for Joe will be bumpy at all.”

Upon learning very early in his college career that anything can happen, Dineen, who hopes to become a big, speedy back in the mold of Bourbon, wants to make the most of this unexpected opportunity — one that figures to bring far more playing time and touches than was forecast for him at safety.

As for how long this experiment will last — one season, four seasons or somewhere between — Dineen has no clue.

“Whatever the coaches ask,” the former (and possibly future) safety said, “I’ll do.”

He's got good size for a RB, and hopefully decent speed.

What was Free State's O like last year with him? Sort of a Nolan Cromwell, option QB, more than a traditional passing QB, or something else?

What are the chances we see a RB option pass? How often did that happen with Kerry Meier (obviously WR option)?