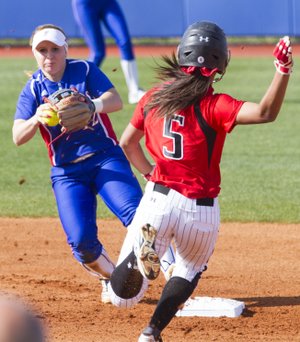 Kansas University’s softball team was one out away from defeating Texas Tech before the Red Raiders rallied for a victory, 9-7, in nine innings on Friday at Arrocha Ballpark.

The Jayhawks (29-15 overall, 3-5 Big 12) had a chance to win in the seventh, leading 4-3 with two outs, but a throwing error led to extra innings. Tech’s Sydni Emanuel was able to tie the game on her own when she singled, took off for second and made it all the way home after a KU throw bounced off her back and into left field.

After the two teams went scoreless in the eighth inning, the Red Raiders (32-15, 5-6) scored five runs in the ninth. Three of those runs came on a bases-clearing double with two outs. Kansas also found some offense in the ninth, scoring three runs, including a two-run homer by Chaley Brickey. Down two, with the bases loaded, the Jayhawks were closed out by Raiders reliever Gretchen Aucoin (11-7).

“I am proud of the way we fought and responded, but I’d like to see that fight at the beginning and not wait for the other team to do something,” KU coach Megan Smith said. “It seems like that’s what we’ve done this weekend. We’ve waited to see what they do and then fight.”

Brickey led KU on offense, going 3-for-4 with three RBIs. Ashley Newman (3-for-4) and Lily Behrmann (2-for-4) were the only other Jayhawks with multiple hits.

Kansas will look to avoid a sweep by Texas Tech at 1 p.m. today.