Column: Downtown Shot Put should be quite a show 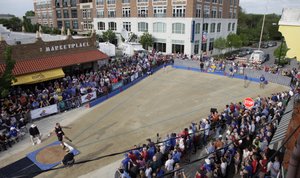 The Downtown Shot Put, an event that has greatly overshadowed the rest of the Kansas Relays the past few springs, will do so more than ever again Friday evening.

Kansas Athletics pulled its financial support of the event, so it’s not part of this year’s amateurs-only Relays, but generous donors have stepped up to make sure another world-class field will showcase their strength, technique and colorful personalities on Eighth Street between New Hampshire and Mass streets.

Bob Sanner of the Lawrence Sports Corporation, a non-profit subsidiary of the Convention and Visitors Bureau and Sports Corporation, didn’t have a great deal of time to pull it all together, but he did, and one of the city’s coolest downtown events lives another year and probably many more.

The checks written by the CVB and Sports Corporation came to a little more than $35,000, according to Sanner, who expressed gratitude to anonymous donors to help foot the bill. He also was grateful to Hamm Quarry Inc. for donating the 400 tons of screened limestone to construct the shot put vector and to Meadowbrook Apartments for supplying the 6,700-pound concrete circle.

Competitors from the first three years requested the change to a concrete circle from plywood because they found the plywood too slippery.

Whiting’s the favorite, Hoffa the crowd favorite, Christian Cantwell the guy who will play the role of villain for no reason other than that he used to compete for Missouri.

Hoffa defeated Cantwell on his final throw of the day two years ago and dramatically pointed to the left side of the landing area.

“That’s my land over there,” Hoffa said. “The land of Hoffa.”

It beats the Meadowlands end zone, the land of Jimmy Hoffa, according to urban legend.

Cantwell groused about not getting to throw last that evening even though he led going into the final round. Cantwell trashed Hoffa, thereby promoting future events.

“Hoffa, he loves this (expletive),” Cantwell said of him playing to the crowd. “You know, good luck. He did good. He’s in shape to throw for it. I’m actually training. He’s peaked out, so, you know, he should win. He got lucky. I did terrible, and he did really good. That’s the way it goes.”

More than bragging rights will be on the line Friday for the behemoths. If the winning thrower sets a Lawrence Downtown Shot Put record, he gets a $2,000 bonus. The mark to beat is 71 feet, 33⁄4 inches, set by Hoffa in 2012.

In addition to giving the throwers the circle they desired, Sanner responded to frustration expressed by high school and college competitors and coaches who didn’t get to watch the event because it was held on a Wednesday. The shift to Friday takes care of that for many whose events don’t take place that night at Rock Chalk Park.

If a decent weather forecast holds, another great night in Lawrence is on the horizon, thanks to eight massive men coming to town to put on a show.

Wish I could be there for it! Sounds awesome!