Kansas running back Darrian Miller warms up prior to kickoff against Kansas State on Saturday, Oct. 22, 2011 at Kivisto Field. 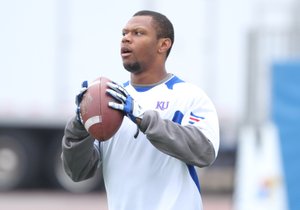 Kansas running back Darrian Miller warms up prior to kickoff against Kansas State on Saturday, Oct. 22, 2011 at Kivisto Field.

Although Darrian Miller’s past statistics don’t reveal much, Butler County football coach Troy Morrell believes the running back who recently rejoined Kansas University’s football team will contribute to the Jayhawks by doing more than taking handoffs and rumbling for yards.

“He’s definitely a talented player, and he brings so much to the table as a dual-threat type of running back,” said Morrell, who coached Miller this spring at the junior college in El Dorado. “He can obviously get the ball handed to him and do great things, but he can also catch the ball out of the backfield and even line up out as a receiver.”

The potential for Miller to become the latest threat in KU’s improving passing game appears to come at just the right time for the Jayhawks. With senior tailback James Sims entrenched as the go-to ball carrier and not really known for his pass-catching ability anyway, and speed back Tony Pierson slowly transitioning out of the backfield and into a bigger role as a receiver — Pierson told the Journal-World this spring that his split would be 80-20 in favor of catching passes — there seems to exist an opportunity for a true running back to become a factor by catching passes.

During his lone season with the Jayhawks in 2011, Miller played in 11 games but caught just seven passes for 41 yards. However, as a team that season, the Jayhawks tallied just 341 yards on 43 receptions from running backs, with nearly half of those totals going to Sims and Pierson.

In 2012, Pierson and Sims again dominated this category, combining for 459 yards and three touchdowns on 35 catches. Because of that, it’s a safe bet both upperclassmen will continue to play some kind of a receiving role, but it’s possible that Miller, 5-foot-11, 190 pounds with good speed, solid hands and outstanding balance, could be the guy KU coach Charlie Weis calls upon to handle more of that role in 2013.

Morrell agrees. And the only thing he’s disappointed about is that he never had a chance to call plays for Miller himself.

“Obviously, you would’ve liked to coach him a year,” Morrell said. “But he has great ability to catch the ball, and obviously when the ball’s in his hands he can do great things.”

Free State High standout Joe Dineen, a junior who has played multiple positions during his prep career, orally committed to join the Jayhawks late Wednesday night. The 6-foot-2, 197-pounder projects as a safety and chose KU over interest from Oklahoma State, Rice, Nebraska and others. 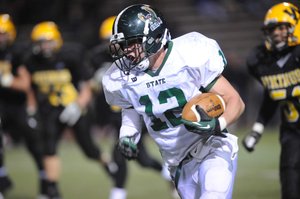 Weis moved up the date of the Jayhawks’ annual spring football game two weeks last April so he and his coaching staff could take in more junior-college practices during the final two weeks of the month. How did the extra time on the recruiting trail work out?

“That was definitely a very good move,” Weis said recently. “A lot of the junior colleges’ spring games are the last week of April, and it gave us an opportunity in that last week in April to get in there.”

From that point on, Weis and company took a fast-and-furious approach to recruiting their third class at Kansas, which continues today and is approaching a critical stage.

“We took the first week of May and hit the high schools really hard, and, actually, the next week we came back and we watched all those tapes,” Weis explained. “After we watched those tapes, we went back on the road for (two more weeks). We’re actually staying out there right till May 31.”

Is Buddy really that bad of a recruiter that he couldn't even get his own son to play for the team he coaches on?

No, seriously though, Dineen is a good pickup and I still can't wait till kickoff...

Academics is my guess. Not that NW doesn't have a little football history, but why else would someone want to go there?

To get away from their family/parents ...

I was talking with a friend from Utah last night who watches a ton of BYU football and he told me "Jake Heaps is a train wreck". He said that he destroyed the show team defense in the spring game but was never really a gamer. This scares me. He went on to say that most of the early success with Jake was behind a veteran and dominant offensive line. As soon as he got under some pressure in the pocket, he folded his hand in Dayne Crist fashion.

Between hearing this and the first off the field juco incident happening in May (Chris Martin), I'm very concerned. We might be in trouble here, boys.

Lighten up, this is Kansas Football. "Might be in trouble" has described our Mays and Junes for 120 years. At least now, the idiots in trouble on the team are real athletes. It wasn't long ago that the knuckleheads going after Chalupas and falling off cars were not very good on the field either. Hopefully this represents an athletic improvement in the the non-idiots as well. I believe like most fans, I'm hopeful, but not convinced.

Lets look at it this way- there's no way he'll be a downgrade from our QB play last year, and he'll have a lot more talent around him than Crist and Cummings had last year.

Out here on the West coast the local radio station interviewed the coach who trains future NFL QB's. Most of the interview was spent raving about Heaps. He worked with him for 5 years before he went to BYU.

LOL. Jake is going to be fine, to say the least. Big 12 teams have no idea what is about to hit them.

That must be why he set all kinds of freshman records at BYU, huh?

I love hearing the great things about the offense but can this team stop anybody? If your defense spends the entire game on the field, it doesn't matter if you have the number one offense in the world. You're going to lose. Sorry to be Johnny Raincloud. I am looking forward to the season and some Big XII wins.

Stop anybody? We had a chance to win 6 games with Dayne Crist as our quarterback. I would say that our defense was a bright spot last year. If they take even a modest step forward, they will easily be average in this conference.

Special Teams is where we need the biggest improvement, followed by the offense.

I heard from the second cousin of a friend whose girlfriend said that her ex-boyfriend told her.....We're in trouble this year with Heaps as QB. Bring back Brock!

I enjoyed this one a lot!!

Psst! Brock IS her ex-boyfriend ;-)

And bring back Turner Gill while you're at it......

From a previous article:

…Despite the 5-foot-11, 190-pound running back’s questionable departure, which did not involve academics — Miller left KU in good standing and performed well throughout his time at Butler CC — Weis heard enough during a recent sit-down with Miller to believe he deserved the chance to atone for past mistakes…“He put himself in a good position academically; he felt like KU was a good fit and he wanted the chance to go back and make a new beginning for himself,” said Morrell, who said he only coached Miller this spring, since the former Jayhawk took classes elsewhere last fall and did not play a game for the Grizzlies. “That’s why kids come to this level, to get another opportunity at a Division I program, and we certainly take a lot of pride in getting guys to that level. I’m just happy for his opportunity, and I think he’ll do good things up there.”

While it sounds like his issue wasn't academics, there are still some missing pieces to the puzzle (besides what the actual cause for his departure was): 1) Where did he take classes his first semester after leaving KU? 2) Did he just work out with the team at Butler CC?

Nice. Starting to clear up a little. Thanks.

Didn't he go to some place like SE Missouri State last fall? Any way, I'm glad to have him back. He adds to the depth at running back that wasn't lacking and could be another threat in the slot if KU wants to go 5 wides. The opponents will have to cover Pierson and Miller. Miller could be huge coming out of the back field to catch some passes in the area Pierson vacates on his routes forcing a linebacker to cover him.

Miller could also be used a kick return man back there with Ford, Cox, or the newcomer Spencer. There are a lot of options in the backfield and in the special teams return units.

By the way, he was only at Butler for the Spring so he could have only worked out with the team. He took classes somewhere else in the fall so he couldn't have played a down. I suspect it had something to do with an attitude problem that seemed to carry over from the shortened Gill area. There were only a few games where the team was together under Gill, and one of those was against Georgia Tech in 2010. I remember Agostino(sp?) being a verbal leader around that time. He needs to step it up again.

Does the (assumed) loss of Martin count against the academic standards required of the program? I don't really understand all that, but I remember that one of the risks associated with junior-college players was that it could eventually hurt the academic averages and graduation rates which would lead to NCAA scholarship losses.