At some sports bars, best seats in the house don’t come free 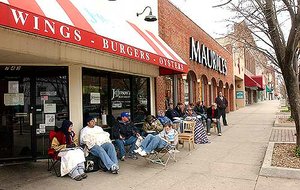 In this 2003 file photo, Kansas University fans wait in front of Jefferson's Restaurant, 743 Massachusetts St., to get a table for the NCAA men's basketball championship game between KU and Syracuse. The line for the night game started forming at 7 a.m. Now, some Lawrence sports bars — including Jefferson's — require minimum food and drink purchases for customers to keep tables on big game days.

Would you pay for a seat at a sports bar to watch the upcoming KU men’s basketball game?

When March Madness hits Lawrence, they’ve been known to commandeer tables for half a day, ordering water and free chip refills to secure a good seat for the big game.

These so-called campers are the target of a new policy some Lawrence sports bars are enforcing for big tournament games: paying for tables.

It’s basically asking customers to order a minimum in food and drink to secure their tables — not unlike the requirements for getting bottle service at a nightclub or reserving a room at many event venues — and different restaurants are taking different approaches.

A four-person table costs $100 to reserve for the game, Hornberger said. The money goes toward anything you order, so it’s pretty easy to reach $25 a person with an entree, an appetizer and a few beers, he said.

In the past, Hornberger said, he’s had people show up at 11 a.m. to get a table for a night game. Under the new policy, customers with reservations can walk right in and sit down at 6 p.m. for a 6:30 p.m. game, Hornberger said. And the restaurant and its servers don’t lose out on sales and tips because a table was out of commission for an entire day.

Henry T’s started the practice during last year’s tournament and brought it back, Hornberger said. “If it didn’t work last year, we wouldn’t do it again this year.”

Jefferson’s restaurant, 743 Massachusetts St., doesn’t reserve tables, general manager Brooke Pearce said. But for big basketball games, they wait to seat groups until everyone’s there, then require a minimum of $15 per person, per hour in sales.

Jefferson’s also started the practice last year, and Pearce said it worked well. They used it for this year’s Big 12 championship game and tournament games, starting with Sunday’s matchup against North Carolina.

“As long as they’re spending money, we’ll work with them,” she said.

At least at his restaurants, Holiday said, loitering hasn’t been a problem. However, he does stick with a common restaurant rule to help keep things moving.

“For those nights when we know it’s going to be busy ... we don’t seat incomplete parties,” he said.

And while die-hard basketball fans may find it unfathomable, there are people who simply want to go out for a meal on game days.

“We actually have people come in, eat and leave,” Holiday said, “then end up with tables open right before the game.”

exactly what I was thinking reading this

BTW, are there any students hanging out here at kusports? Seems like most of us here are KU alumni.

The Stadium in Las Vegas, probably the best new sports bar, charges around $200 PER PERSON for big sporting events!

My couch is free!

Yeah but what have you been doing on it?

jross, you have to warn people before saying things like that! I just spit water through my nose I laughed so hard.

Totally understandable. You can't just walk into a regular restaurant and sit there for hours either. This has been a practice in most establishments in larger cities for a long time.

I've purchased tickets on the street for tourney games in Omaha, Oklahoma City, Dallas and Kansas City. However, I don't know if it works the same at one of the football stadiums. Is it likely that people/scalpers will have tickets available for sale outside Cowboys stadium?

Apparently that was an unhelpful, smartass answer.

Dang man I've hit that on a Thursday on the 1st day of the turny on my own. Lunch, wings, dinner, nachos, beer, beer and the ocassional shot for Victory.

Then I have turned around on Friday and done it all over again.

I like the idea of the table fee, it makes huge sense and I do't blame them a bit. Maybe they should add the gratuity to it to help out the wait staff?

Does The Bird qualify as a sports bar?

Certainly. It's a triathlon. Seagrams shot put. then hip checks to AWB's Pickin' Up The Pieces, followed by hurdling vomit and urine in the parking lot.

15 an hour? last year it was 25 at jeffersons for the mizzou game! ive never had so many pitchers of blue moon in my life lol.

but last year watched the OSU game at the bar across from buffalo wild wings (forget the name) and it was awesome! The natty watched at the granada and was also awesome! i hope we make it back so i can venture back to town and watch it!

I watched the UNC game from Johnny's at P&L. They removed all the stools from the bar and hi-top seating area. Standing room only. Smart on their part, since there were wall to wall people, but it made for a tiring game. Still, the second half energized me and I made it through!

We love to go out to watch KU and we always eat and drink and leave close to a 100% tip. I also think the policies the restaurants mention are a great idea!!!