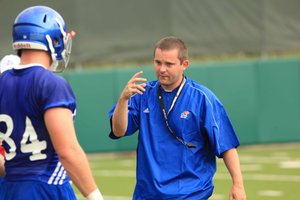 Kansas University football coach Charlie Weis doesn’t plan to rely as heavily on junior-college players as he did in his first full recruiting season, but it always will remain an important part of his strategy to upgrade talent in the program. Given that, it must be comforting to know that he has an assistant coach who already has established strong ties to the region of the country where most junior colleges are located.

Jeff Blasko not only is KU’s tight-ends coach, he was a key reason the Jayhawks landed so many big fish from the juco ranks.

A 2005 graduate of Robert Morris University in his hometown Pittsburgh, Blasko is responsible for recruiting Arizona and California for Weis.

“Seventy-two in the state of California and eight in the state of Arizona, and I had all 80 of those schools,” Blasko said. “So when you’ve got 80 of the 130 junior colleges (with football programs) in the country, you better produce. Fortunately, we were able to brings some guys on board. And it wasn’t all me by any stretch of the imagination.”

Blasko, who came with Weis from Florida, where he worked as offensive-quality-control aide, said KU O-line coach Tim Grunhard was instrumental in helping him to recruit players from his unit and said the same of D-line coach Buddy Wyatt. And with every juco recruit, Blasko said he played up the NFL connections of Weis and defensive coordinator Dave Campo.

Those contacts played a role in so many scouts attending Kansas practices last season. The exposure to pro scouts extended to postseason all-star games. Josh Williams didn’t have a sack in his lone season with Kansas, but Weis was able to convince scouts he was a sharp player who always was assignment-sound and was quick enough to bolt into the backfield on occasion. Dayne Crist, who didn’t throw a touchdown pass to a wide receiver, received two invitations to post-season all-star games and came away from one of them with an MVP award.

“The junior-college players are walking into a situation knowing they can compete to start for the last 24 games of their college football careers, and if they play at a high level they know that coach Weis is going to pick up the phone and make some calls,” Blasko said. “He’s been around, along with coach Campo. Those guys picking up the phone, there aren’t too many guys they’re calling who aren’t calling them back. It’s huge.”

The carrot of a possible NFL career is so close, juco recruits can smell it.

“With the JC guys, it’s a business trip,” Blasko said. “It’s not, ‘I’m coming out of high school, and I’ve got five years to play four.’ It’s two years to play two or maybe three years to play two. The antenna goes up when you talk to these kids about Weis and Campo. It’s definitely helped with the recruiting effort.”

So has Blasko’s boundless energy.

Of course playing at a high level and setting themselves up for a possible shot at the NFL means absolutely nothing to KU and it's fans if we don't start winning games. I'm trying to remain positive about the NFL sales pitch, but I can tell you for certain that this did nothing for Callahan when he coached Nebraska. I no longer live in Nebraska (thank the good Lord), but I can still remember his tenure there very clearly. I can also remember the two trouncing we gave them in '05 and '07....again, Callahan coached teams. He was supposed to be an offensive genius, much like Weis. Let's hope and pray that Weis figures out how to coach these kids up to win football games for our great state of Kansas and it's finest university.

With reguard to last season's 1-11 finish a 2-9 record would be an improvement. I don't think we will be favored in many games asside from game 1.

I would be happy with 4-5 wins this season and I am definitely excited about what Weis and his staff are doing so far. Now if it can we can take all this hard work and put it into wins.

Many fans in the Bay Area were excited when Callahan left Oak-town. Sort of think the comparison is short. Where is he now?

The staff needs to keep pursuing quality Juco guys as we will have issues recruiting top 250 players untl we establish a consistent winner on the field.

100% agree as long as they behave and have their academics in order.

Much rather have a 20-21 year old come in with more physical and mental maturity than an 18 year old.

So many people miss the reason for recruiting JUCO's. Yes, there is a need for a quality infusion, but that is because we are 10 - 20 recruits short in all those coaching transition classes. We are lacking upper classmen, which is why CW recruited upperclassmen - JUCO's. He will recruit JUCO's until he can get a normal cycle of classes rotating through.

......Marcus Jenkins-Moore. If healthy, all six players have legitimate shots at starting this coming season.

So is he healthy or not?

Big 12 Media Days is next Monday and Tuesday in Dallas. KU and Coach Weis take their turn on Monday, so we should at least be able to get some kind of comment about it then.

Newell and I will be down there and I've got it as priority No. 1

Thank you. Any web chats planned? Those were/are great!

That being said, great job by Coach Blasko building these Juco connections and really selling the program and the relationships these coaches have with the next level. Not many programs can say that so you definitely have to use what you can to draw interest and signatures. A lot of recruiting doors will open in the coming years if these players improve, get drafted, and most importantly the team performs well on the field. I know Weis has mentioned several times that he has a recruiting plan in place to build on Juco players at first, but slowly taper off as we start to pull in and develop high school players though I'll be curious to see if this changes given the recruiting efforts and success Blasko is having.

Football season cannot get here fast enough. Definitely looking forward to seeing the hard work they have put in during the offseason pay off in the form of success and wins. Rock Chalk!

Yeah, story must have been up against a deadline.

Successful JuCo recruiting is an absolute must for a school like KU (or any school in a weak or small recruiting area) to ever have any chance of sustained success. It appears Weis knew that when he took this job and now we'll see how this group pans out. JuCo numbers like this year do equal long term disaster fir any program, but Weis is on record as saying he will make it much more balanced between HS and JuCo and the 2014 class so far seems to indicate that is indeed the case.

I wouldn’t say it’s an absolute must. It’s a good idea, but you can win without the JUCO guys. Mangino did it. He was taking 2-3 star guys and turning them into NFL players.

Chris Peterson has taken that to another level. He has 2 BCS Bowl wins and 6 top 25 finishes in 7 seasons. He did it with 2 star guys like Ryan Clady, Doug Martin, Kyle Wilson and Shea McClellin. He did it with a 3 star QB Kellen Moore, whose next best offer was Idaho.

I don’t know his entire recruiting history, and he did inherit a winning program from Dan Hawkins and Dirk Koetter before him, but he is a great developer of talent.

Snyder’s use of JUCO players is well documented, but he is still more a great developer of talent, than JUCO recruiter. He had one amazing JUCO recruit in Bishop, but he took 3 star Colin Klein into serious Heisman consideration, and developed a terrible Cal-State transfer, Chad May, into a 4th round NFL draft pick.

I think JUCO is more often than not used for fleshing out the roster, which we badly need, don’t get me wrong. This year we have a couple big JUCO names but we’ll see how that goes. It’s likely that the top players will be high school recruits in their 2nd-4th season. Guys like 3 star Ben Heeney, whose next best offer was Colorado St. but has developed into a Big 12, All-Conference player.

Bottom line is, JUCO can help fast-track you out of the cellar, but if you aren’t developing your high school guys, even if they are 2-3 star guys, you won’t succeed.

I guess I should expand on it. If schools recruit JuCo's looking for star players, that road leads to disaster. HS kids developed over 4 or 5 years are where the stars come from, but the JuCo's ranks are where teams in small and weak recruiting areas build their depth from. Without looking at Boise's roster, I can safely guess they have a decent number of JuCo players on their roster who fill in the depth of the roster because Idaho and the Pacific Northwest in general is not a strong recruiting area. Back to my point, if KU is depending on the JuCo ranks long term to find players who can be the face of the program, that is a bad thing. The JuCo ranks are where Weis will find the players who are ready to go right away and fill in the depth chart to make up for the lack of HS talent in Kansas and the KC area.

We have hit the JUCO ranks hard, check. We are recruiting the KC Metro area hard and pretty much winning, check. Now, if we can just sew up Wichita. Too many really good players out of the state's largest city are going elsewhere.