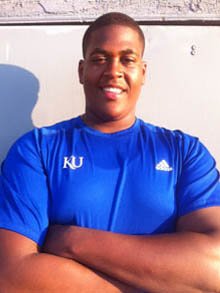 Although he has been relatively quiet since arriving on campus earlier this summer, Kansas University defensive tackle Marquel Combs, the team’s unofficial recruiting guru, is still at it.

So says El Camino Community College offensive lineman Pearce Slater, who earlier this month committed to KU after taking a visit to Lawrence and being hosted by Combs.

Slater, a 6-foot-8, 320-pound tackle from Torrance, Calif., said he knew of Combs, who played his junior-college football down the street from Slater’s high school, before meeting him.

“When somebody’s over there balling like he did, you know about them,” said Slater of Combs’ standout career at Pierce College in Los Angeles.

The connection to Combs went beyond just knowing about him. The two had mutual friends, and when one of them heard that Slater was receiving interest from KU, the friend made sure to connect the two Californians. That previous experience made Combs a natural to host Slater on his visit to Lawrence in late June, and Combs wasted no time jumping back into his role as master recruiter. He spent most of the time the two were together hyping KU and selling what he believes is a bright future.

“Yeah, that’s what he does,” Slater said with a laugh. “When I was on my visit, he was getting after me, just saying, ‘Let’s do it, let’s get here and get going.’ He’s a character.”

Of course, several members of KU’s coaching staff also played a key role in landing Slater, with tight-ends coach Jeff Blasko getting credit for finding him and offensive-line coach Tim Grunhard and head coach Charlie Weis getting credit for helping seal the deal.

Slater, a three-star prospect according to Rivals.com, said the coaching staff’s NFL experience was a big factor in his choosing KU over offers from Arizona State, Texas Tech and Utah. He also said Paul Buskirk, KU’s associate athletic director for student support, played a big role in helping him realize he could graduate from El Camino this summer and be eligible this fall.

“When I went on my visit, that’s when we found out it was even possible,” said Slater, whom many believed would be a hot target in the Class of 2014.

Slater is in the process of finishing up his final summer session at El Camino, which is slated to end Aug. 8, and hopes to report to campus as close as possible to the Aug. 7 opening day of fall camp.

“I’m gonna try to figure out a way to get my grades posted early,” Slater said. “But if not, I’ll get there as soon as I can that same week my grades are posted. I’m in very good shape of being eligible.”

Slater said KU coaches told him he would get an opportunity to compete for a first-team reps and that most likely would come at right tackle, where he played throughout his juco career.

Regardless of where he plays or how much, Slater sounds like a guy who has bought into the Weis mantra of getting after it both in the weight room and the classroom.

“I’m coming in ready for whatever’s thrown at me,” he said. “If the chance comes that I get to play right away, I’ll take that. If not, I’m more than happy to work and do whatever it takes to get to that point eventually.

“I like to have fun. I’m a real fun guy, and I may joke around, but when it’s time to get down to business, I’m always ready to go.”

Slater does not yet know whom he will room with and said he was leaning toward wearing jersey number 71, which he wore in high school as homage to his mother’s birth year (1961) and his birth month (October).

"...he was leaning toward wearing jersey number 71, which he wore in high school as homage to his mother’s birth year (1961) and his birth month (October)" Oooo-kaaay. Rock chalk.

I guess he's a Satanic surfer.

That is correct. Hail Satan, the surf is up. God is in the heavens; the devil in the deep blue sea. Actually, upon reflection, I could see what Iamakufan stated below, the 61 + 10. My numerological skills were a bit off this morning. Rock chalk.

I had to read through that a couple times also, but I think you're right, GO_BIG_BLUE.

6'8" and 320? Can he catch a pass? If so we need to work this guy into our goal line offense. Can't wait to see him knock down some opposing QB passes.

It sounds like he had the size but he is on the wrong side of the line to do that, plastic. I love the fact that we are getting on more and more recruits radars. I'm really getting excited for football season. It can't get here soon enough.

He's an OL not DL. So I hope he's not knocking down any passes!

Competition and depth....things we need at all positions.

Isn't there also a CB/DB from Pierce that we snagged a year ahead of schedule and after signing day?

DMiller is another JC that we know can perform that we snagged after the fact.

ESPN writes articles about changes to recruiting classes because of which players schools lose after the fact. These are rather significant changes in the right direction, and all the more reason why KU should be even more improved than people like to joke about. And it bodes even better for the next few years - several of the JC's have 3 yrs of eligibility remaining.

Yeah, his name is Brandon Hollaman, played with Combs. Kid was an All State RB in PA, wonder why he was not recruited by any BCS programs in HS?