Kansas guard Elijah Johnson raises up the crowd after a Jayhawk bucket during the first half on Monday, Jan. 14, 2013 at Allen Fieldhouse. At right is Baylor guard Brady Heslip. 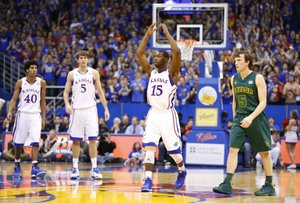 “I think it’s the best way to showcase our league each and every week. I think the players enjoy it. I’m sure all players across the league do,” Self said. “The two-day turnaround (playing Saturday at Texas Tech and Monday at home) ... we’ve done it a lot. This is the first time this team has done it. Whenever you play a team that does multiple things and only have about an hour of practice, it always makes it nervous for a coach. That’s the case when you play Saturday and then a Monday. It only gives you about an hour in which your teams actually practice (Sunday). You really have to make the most of that hour.”

Drew is back: Baylor coach Scott Drew missed the first two games of the conference season before returning to the bench for Saturday’s game against TCU.

“Our staff did a tremendous job,” Drew said. “Any coach is only as good as his staff. I knew we had a great staff. After those two games everyone got to see how good our staff is. If anything, whenever you are away from something, you are just that much more happy to be back and excited to be back. I’m pleased with the conference start we’ve had because every conference win is a good one.”

“It does (help) from the standpoint you are not so consumed with the substitutions and players’ emotions and everything else and able to just analyze the game,” he said. “At the same time, I made the mistake of going to the treadmill watching the second half of the Texas game (86-79 win). That game went into overtime. The next day I couldn’t walk, I was so sore being on the treadmill that long. That was the lesson learned from that one. I thought it would help with things. The next day it didn’t,” he added, laughing.

KU nets one No. 1 vote: KU, which was ranked fourth in the country on Monday, received one first place vote — from best-selling author and GolfChannel and ESPN regular John Feinstein. Sports Illustrated’s Seth Davis was the lone voter to rank KU second.

“Kansas has the most impressive win of the year: At Ohio State, as Michigan found out,” Feinstein told the Journal-World’s Tom Keegan in an e-mail exchange. “Bunch of one-loss teams. I give them the edge because of that.”

Feinstein has written several best-selling sports book, the most famous “A Season on the Brink,” an all-access look at a season of Indiana basketball under Hall of Fame coach Bob Knight.

Other notes: KU’s 13 blocks equaled Baylor’s field goal total of 13 made baskets. ... KU has scored 121 points over the past two games, the fewest in a two-game stretch since Jan. 19 and 22 of 2009 when KU scored 59 points and 62 points against Nebraska and Villanova, respectively. ... KU's 10 blocks in the first half are the most by a Jayhawk squad in a half since Dec. 29, 1997 when they swatted 10 Vanderbilt attempts in the second half. ... Withey’s three blocks marked the 26th consecutive game he has recorded at least one rejection and the 14th game this season he has recorded multiple blocks.

"The next day I couldn’t walk, I was so sore being on the treadmill that long. That was the lesson learned from that one." - Scott Drew

Yeah, I don't think that's "the lesson" the NCAA Committee on Infractions wants to hear you learned, Drew. Here's to hoping you can start playing by the same rules as everyone else.

In Drew's defense, that rule has since been dropped and you can make calls and texts now. Just sayin.

Hopefully the authorities in Washington and Colorado release all their prisoners convicted of marijuana possession, since that rule has since been dropped.

I personally hope they do, b/c the fact that we're burning tax money to keep them in Prison, is laughable

No wonder they were dejectedly frustrated early in the 2nd half, and finished with 21% FG%.

We need a Withey-Block meter.Where he stands all-time, and who is ahead/behind him.

No wonder Baylor lost. Scott Drew was back coaching again.... Maybe he should spend more phone time and let his assistants coach the game for him.

Coaching is definitely a relative term.

But he didn't call Holly smokin. He said "it" was smokin tonite. And as far as I'm concerned he said nothing wrong with his comments about McCarron's fiance and his mom. Both very attractive women. Where was the uproar with the very foul words used by David Letterman and Bill Maher when talking about Sarah Palin and her family?

I do believe they are brothers-in-law.

Drew is a great coach and his team will make it in the big dance as they always do. Some of the brats on here don't understand that.

Some of the "brats" on here must have better vision than you do. Drew is terrible, and proved that tonight. He has all kinds of talent yet can't coach for the life of him. Why did he keep pounding the paint the second half when KU had 10 blocks in the first half. Baylor shot a smoking 21% from the field from the paint, yet kept trying and trying with no adjustments. KU played some of the best perimeter defense that we've seen all year, and before this game it looked a bit sketchy. A good coach would have done what Hoiberg did - get Withey out of the post and stretch the defense. Scott Drew is terrible, and that horrible game plan shows why. The reason Drew can't win against well coached teams with arguably less talent is because Drew is a bad coach that gets his talent the Calipari way. Drew is terrible... the "brats" are correct.

I was just waiting for the "haha jkjk" but it never came.

Well, call me a brat then, because Drew is not a great coach. He's not even a good coach. He may be a great recruiter, but when it comes to actually coaching those players, he is sub-par at best. And honestly, I find that kind of strange because I think his dad was a pretty good coach.

wildjayhawks are like gremlins and it's always after midnight when it's a wildjayhawk. Don't feed it.

Neat to hear of a longer time ago Jayhawk like Robertson in the crowd....our last St. Louisan to be a productive part of Jayhawk teams (pre-McLemore).

I was waiting for it to read, "KU's 10 blocks in the first half are the most by a Jayhawk squad in a half since they swatted nine in a half against ..." (Referring to an article the other day) :-)

If Hoiberg had Drew's talented squad, this most probably would have been a true nailbiter. But for concern over Ben's injury, Self and assistants stood chuckling on the platform of the caboose, examining the debris left beside the tracks while their locomotive roared on toward Saturday's game in Austin.