Kansas University safety Bradley McDougald (24) matches up with Northern Illinois tight end Tim Semisch in the first half of KU's game against the Huskies, Saturday, Sept. 22, 2012, in DeKalb, Ill.

For the first time since 2010, the Kansas University football team is sending multiple players to the NFL combine.

McDougald, whom KU coach Charlie Weis at one point called the best player on the team, announced the news via Twitter on Tuesday. 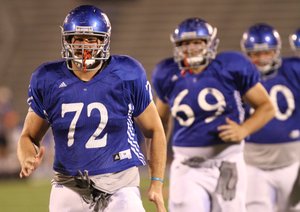 Hawkinson, a four-year starter and KU’s record holder for consecutive starts, confirmed his invitation to the Journal-World via text message.

Hawkinson, 6-foot-5, 300 pounds, and McDougald, 6-1, 209, will become just the fifth and sixth Jayhawks in the past four years to participate in the combine, joining 2010 participants Dezmon Briscoe, Kerry Meier and Darrell Stuckey and 2012 participant Steven Johnson.

Although Johnson wound up undrafted, all four recent combine competitors wound up making NFL teams a few months after their trips to Indianapolis.

That is certainly the goal for McDougald and Hawkinson, two of the most productive Kansas players during the past four seasons.

Hawkinson, because of his size, good feet and versatility projects as a mid- to late-round selection and is ranked, by multiple draft scout web sites, as one of the top 20 offensive tackles available in this year’s draft.

McDougald, a natural athlete who still is getting used to playing safety after spending his first two seasons in Lawrence at wide receiver, ranked second on the team with 92 tackles and also tied for the team lead in interceptions (3) and forced fumbles (2).

Hawkinson, a McPherson native who graduated in December, is headed to San Diego to train for the combine. McDougald, a native of Columbus, Ohio, elected to stay close to Lawrence so he could complete his degree and will spend the next several weeks training in Kansas City.

Anyone know if they'll play in the Senior Bowl and/or the East-West shrine game?

McDougald accepted an invite to play in the East-West Shrine Game.

How about KU losing 11 games this past year to all bowl eligible teams . I am very optimistic with both Sims and Heaps in the backfield.

I just started to look that up before the NIU game. Thanks for clarifying. :-)

As of now those teams are barely above .500 in their games.

and the victory was over a team that won a game in the FCS playoffs. It is no wonder we had the 2nd toughest sched, tho that's also just the Big 12 with 7 of the 10 toughest sched's (SEC had 3). I think I heard that there have actually been other teams that have played their entire schedule against teams that become bowl eligible, but it is only 1 or 2 other teams ever. It helps that there are becoming more and more bowls for the middie teams.

Good luck to both Hawkinson and McDougald.

Good luck, gentlemen. And thanks for sticking it out these past 4 years.

Good luck to them. Has anyone noticed that the Wichita Eagle ( like the KC Star ) has gone to the Pay Wall BS !!! Where did the day go that Advertisements in the Papers paid enough to the Papers so they did not have to turn to Greed and charge out the A$$ for online reading ?? KC Star wants 109 bucks a year and the Eagle wants 60 " I think " a year subscription!! They can both kiss my grits !!!

Did the NFL folks watch these guys play? 1 and 11.

Apparently you dont watch much NFL. Not saying theyll necessarily get any offers, but there are plenty of players from non-BCS conferences and struggling schools playing on Sunday.

Hawkinson in particular was an impact player; I'd love to see him move on to the next level.

Certainly Brown, Zlatnik and Opurum will get invited to camps after the draft. The Denver Broncos have made a strong case for not overlooking some of the KU talent the last couple of years.

I'd love to see Opurum get a shot at FB in the NFL. He certainly has the ability.