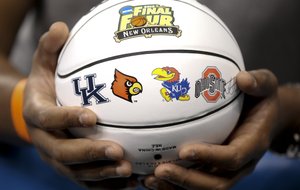 New Orleans — The elevated court in the New Orleans Superdome takes some getting used to.

“I actually did feel like I stepped onto a stage. I felt like I was about to rap,” said Kansas University guard Elijah Johnson, who has been able to practice two days in the dome heading into today’s 7:49 p.m. Final Four game against Ohio State.

“The floor felt good. It felt like a make-believe court. I don’t know if it was because it was elevated or what, but the court just seemed longer. But I like it so far. I plan on having fun up there,” Johnson added.

Noted Thomas Robinson: “It felt like somebody dropped us in a box or something. I’m even scared to see what it looks like when it’s filled up (75,000 fans).”

Added Tyshawn Taylor: “The court is similar to the one I played on in the Sweet 16 my freshman year against Michigan State. It was in Lucas Oil Stadium in Indianapolis. It was a little bit elevated. I think this court, with it being in the Superdome, it seems a little bit big, the lights seem a little bit brighter.

“The court seems a little bit springy, too. It’s a stage. I’m excited. For us, it’s our biggest stage. It’s a good feeling to be here and playing on a court where it feels like you’re at center stage and everybody’s watching you.”

Taylor on the excitement of the Final Four: “For a few of us, it’s the last time we will be in this situation. Guys like myself, Thomas (Robinson, a junior who is expected to turn pro after the season), Teahan (Conner, senior), Jordan Juenemann (senior) ... we’ve been here so long. It’s this time, our last time. I think because we are here, we might as well have fun. But since we’re here, why not take this thing (trophy) home with us? If you’ve got to leave (KU), you might as well leave on top. That’s how we look at it.”

Self was asked about his Final Four experience. KU won it all in 2008: “Well, I sought out a lot of advice before San Antonio. I talked to several coaches, including coach (Bob) Knight, guys that have been there, asked them to give a guy that doesn’t know some advice on how to handle things. I thought I had a pretty good manual going into it as far as the things that you wouldn’t think mattered that do matter,” Self said.

“We try to follow that as closely as possible this time. The thing about this week is, I’m tired, so I guarantee the players are tired. It’s an adrenaline rush where you get fired up, then you drop down, then you get pumped up again, it goes down. You have to somehow make it be as even-keel as much as possible. You got to keep your guys off their feet, you have to keep their minds fresh, and you can’t let them have any fun. That’s a tough combination to do.

“We basically try to do that in a way where they think they’re having a good time, but we’re controlling everything that’s going on.”

Itinerary: Self let his players walk down Bourbon Street on Wednesday night, but since then it has been all business.

“We don’t let them go to the lobby. Family members have a time slot where they can actually see their kids up on their floor in a room, basically a kind of a suite area that our guys go gather and hang out in,” Self said. “It’s just one of those things that we’re busy enough. We got up this morning at 10. We ate breakfast at 10:15. We have been on the go and will be on the go till 6 tonight. Tonight what we’ll probably do is we’ll have a walk-through, a last walk-through, film session, let them get a movie, that’s it.

“It also amazes me, it doesn’t take a lot for kids to have fun these days if they have a phone. There’s plenty of things for them to do on that.”

Underdogs: Several Jayhawks in the locker room indicated they loved the underdog role this weekend.

Self’s take on that: “I think that’s fine. I kind of like it, to be honest. We’ve been the hunted, it seems like, for a while. It’s nice to kind of be able to flip that a little bit. Even though the hunter still has to be hungrier than anybody else, it’s nice sometimes to flip that.

“I don’t know if you’re a serious underdog when you won 31 games, you win your league by two games in a good league. We have kind of flown under the radar, by Kansas standards of late, which I think has been very healthy for a team that’s just trying to find themselves.”

A ring is coming: All players will receive Final Four rings. “I didn’t even know you get a ring for getting to the Final Four. I had an idea, but it dawned on me once we was getting fitted for it,” Elijah Johnson said. “I think that’s one of the points where it set in, and I realized there were only four teams left and we were all standing next to each other.”

Openings: Self has openings on his staff for a director of basketball operations and assistant coach.

“It will be awhile. I’m in no hurry to do that. I’m not even thinking about that,” he said of filling the positions.

New Orleans has done a remarkable job recovering from Hurricane Katrina: “I think this is a great city. It’s a great venue. I really feel like Bourbon Street, whatever, the fans will enjoy that,” Self said. “To me that’s very similar to The Riverwalk. It’s a place for all people to go and enjoy it, those sorts of things. It probably does a lot to boost the economy in this area, which probably needs it still, coming off such a catastrophe. It’s great to be here. Weather is fantastic. I’m sure the fans from all the schools are enjoying it.”

Bring it: Self was interviewed by CBS’ Jim Nance before several thousand fans after KU’s 40-minute shootaround Friday at the dome: “If they expect us to bring our A-game tomorrow, they should all have curfew at midnight tonight to bring their A-game,” Self quipped of the KU fans.

Why not just crawl back under your rock then?

Yeah, that sucks that they're back on their feet.

In other news, KU plays OSU in the Final Four tonight!

Well, yeah, they are to the extent they were devastated. The tornadoes in Joplin and Tuscaloosa aren't even close on an order of magnitude. The only comparable area of devastation I can think of would be the area of Japan where the tsunami hit and the reactor melted down.

One of you guys said it first, but worth a repeat:

Some stupid "sports reporter" had to ask coach Self about the openings on his staff. This week is NOT about that. Get a clue?? The media is so stupid.. As though Bill was going to make a grand announcement.... Let's play ball!

what do they (media) want: This just in Self has hired Phil Jackson and resurrected John Wooden to be on his staff? It takes time to make the right hire and while coaching for a berth in the championship game who cares who the next assistant coach will be?

WELL, WE ARE "THE OTHER GAME". THE EXPERTS.... HAVE ALREADY CROWNED COULDTUCKY NATIONAL CHAMPIONS. IF THE JAYHAWKS DID'NT HAVE SOME COACHING CHANGES TAKING PLACE THE MEDIA WOULD'NT HAVE ANYTHING TO TALK ABOUT. I WONDER IF THE GAME, YOU KNOW, THE OTHER GAME SHOULD EVEN BE TELEVISED?
I PREFER BEING IN THIS POSITION. MAY THIS ATTITUDE OF THE MEDIA EXPERTS IGNITE AN INFERNO OF DESIRE, TALENT AND ENERGY IN THE HEARTS OF THE JAYHAWKS. FOCUSED RAGE. R C J H