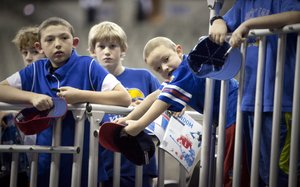 Omaha, Neb. — Unless you’ve been living under a rock, you know by now that University of Detroit Mercy big man Eli Holman made a somewhat shocking statement about Kansas University forward Thomas Robinson after learning that the 15th-seeded Titans would face No. 2 seed Kansas at 8:57 tonight in the second round of the NCAA Tournament.

Thursday evening, in the Detroit locker room during Detroit’s media session at CenturyLink Center, Holman seized the opportunity to explain he meant no disrespect when he told a Detroit reporter he could “handle” Robinson.

“The comment kind of got blown up a little bit,” Holman said. “So I’m gonna clear that up now. That wasn’t exactly what I said. Thomas Robinson is a great player. He’s projected as one of the top five picks in the (NBA) draft (in June), and the guy’s a beast down low. But what I’m saying is, Detroit’s here, too, now. And we’re coming to play.”

In its entirety, Holman’s original comment read: “Confident? We have a lot of confidence. Robinson? I can handle Robinson. He has to handle me. These are the moments you want as a college player. You want to play against a player like Robinson.”

Holman said he saw nothing wrong with what he said. Of course, he also made it clear he understood why it created such a stir.

“I got phone calls from California, with people saying, ‘Man, what’s going on?’” Holman said. “A lot of people understood what I was saying, but some people didn’t. When I said it, it didn’t seem bad. I didn’t say I was coming in to guarantee a victory. I didn’t say I was gonna drop tremendous numbers. I didn’t say that.”

Although he never backed down from the intent of his comment, the 6-foot-10, 270-pound giant said he was happy to hear that KU’s national player of the year candidate and likely All-American took no offense to it.

“Robinson replied back and said that he likes confident players,” Holman said. “He got it. There was no hatred, there was no disrespect, nothing like that.”

Another element of the aftermath that Holman enjoyed was the extra attention it brought to his team, a squad some have called the best 15 seed of all-time.

With game day here and all of the talk in the past, Holman was asked if he thought he could, in fact, handle Robinson.

“Only time will tell,” he said. “I’m not gonna say no, I’m not gonna say yes. I don’t know if he’s played against anybody 270 who can run the floor. We’re gonna see. It’s gonna be a fun night for both teams.”

Come at the king, you best not miss...

I'm Avon Barksdale, and I approve this message.

Well said my good ser, however, if quoting the greatest television series it would go like this:

When you play the Game of Thrones, you win or you die.

lol @ how their last game known as a B12 team will be remembered :D

It's all about the game.

he forgot, he's going to have to handle TRob, but the whole KU gang. it's the whole KU starters that he needs to worry about. let's dismantle Detroit! rock chalk!

He got the "Beast's" attention. Thank you for that!

It's kinda like Saddam Hussein talking trash on the U.S. You better be careful who you antagonize, or else you better have the fire power to back it up. I guess time will tell if this kid has the arsenal to back up the talk.

In his defense, whenever people quoted him they only quoted to the part that says TRob has to handle him, and totally leave out

"These are the moments you want as a college player. You want to play against a player like Robinson.”

The kid is confident, so what? It's the last air of confidence he will have before TRob drops 30 and 20 on him.

It's never wise to tug on Superman's cape.

He has a right to talk, they won their championship by 20 points. KU didn't make the finals. If Holman watched that game, I am sure he feels he has nothing to worry about. KU has one game left, the next game. Lets hope there's 6 next games. RCJHKU

"I don’t know if he’s played against anybody 270 who can run the floor."

This may be a more telling quote. This one lets us in his head for real. He believes Robinson has never played against an NBA body before. Well...

If he's 270, he ain't running the floor with Mr. Zero. If he's 270, he's not quick enough to stay in front of him either. I heard tale of Zero working over a certain 260 pound NBA body from Ohio last summer, and NBA scouts seem to think he'll be pretty good against 270 bodies next season.

No sir. They will rely on double and triple teams, too, if they are smart.

If by "handle" he means foul out if his coach is smart enough to put him on Mr. Zero (I like that KG)....then he's probably right.

I have seen or been to every NCAA Kansas game since my final year at Kansas in 1971 and I have never seen Kansas so trashed on by a national audience than I have for this first round game against a 15th seed.

It appears Detroit has totally forgotten about Elijah and Jeff....I'm sure they will be reminded about them right around 10:00 tonight!!

You are so right, Oakville. But let's face it: a big part of the reason for that is KU's recent history of losing to mid-majors. Let's hope that all this talk about Detroit fires up KU and they take them seriously from the beginning.

Can you imagine what the twins might have had to say in reply?

Classic CYA. My bet is that McCallum Sr. told him to extinguish the flames.

I actually liked his comment. There's nothing wrong with a player expressing his point of view. Detroit is a good team. We have work to do. This is not a cake walk. I would prefer TRob not getting the idea that he's going to drop him for 30 points. We have to play like a team. None of this pull up at the top of the circle and pop it tonight, Thomas. We need you down low. We need to jump on this team early. Get the ball to Withey. Kick it out to EJ or TT. Find the open man and get 20 plus rebounds and we'll be just fine.

I'll bet his coach about fainted when he read that quote. This kid needs media lessons.