Kansas' Aishah Sutherland skies over a pair of A&M defenders during their Big 12 tournament game on Thursday, March 8, 2012, at Municipal Auditorium in Kansas City, Mo. 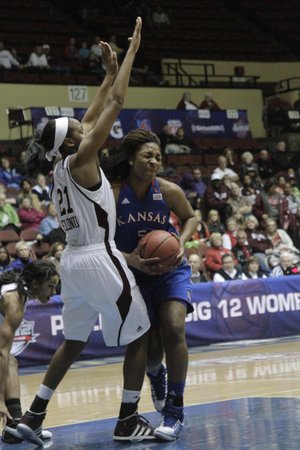 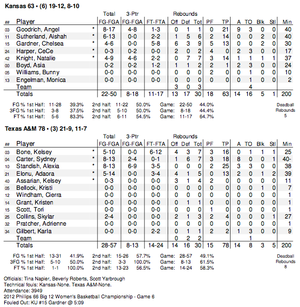 Presented with an opportunity to pick up a statement victory before next week’s NCAA Tournament, the Kansas University women’s basketball team dropped a quarterfinal Big 12 tournament contest, 78-63, to No. 22 Texas A&M on Thursday night at Municipal Auditorium. Now the Jayhawks are forced to wonder what will happen when the women’s bracket is announced Monday night.

“It’s going to be a long three or four days,” said junior point guard Angel Goodrich, who finished with 21 points to lead KU (19-12).

Added senior Aishah Sutherland of the wait: “It’s gonna be hard, but we’ll just cross our fingers and hope we get in.”

For a half — as had been the case during most games this season — it looked like the Jayhawks were poised to play their way into next week’s tournament. Despite poor shooting on both ends, the teams battled throughout the first half, and Texas A&M took a two-point lead into halftime.

In the second half, though, KU’s shooting touch stayed cold, and the Aggies (21-9) went on a 23-7 run midway through the second half that stretched a three-point A&M lead with 13:31 remaining to a 19-point Aggies cushion at the four-minute mark. A&M shot 58 percent during the decisive second half. KU never could get anything going.

Each team hit eight three-pointers — KU was 8-for-18, A&M 8-for-13 — and each pulled in 30 rebounds. One area that may have hurt the Jayhawks most was turnovers. Although they trimmed their 21-turnover average against the Aggies down to 16 Thursday night, that number still doubled the amount of times the Aggies coughed it up, which led to seven more shots for A&M.

The Aggies played without their leading scorer, Tyra White, who had a string of 87 straight starts snapped because of an injury. Without White’s 14 points and six rebounds in their lineup, plenty of Aggies picked up the slack. Most notable was freshman guard Alexia Standish, who entered the game averaging 4.3 points per game and exploded for 25 on 8-of-13 shooting, including 6-of-9 from three-point range.

“I didn’t even see (White) until we were shooting free throws (during pregame warm-ups),” Goodrich said. “When I did, I was a little surprised. I don’t know what’s wrong with her, but she’s a great player, and I hope she gets better.”

A&M coach Gary Blair said White was injured during last week’s game against Texas. He did not say if she would return during the rest of the Big 12 tournament.

Blair also had flattering words for KU. When reporters were finished peppering him with questions, Blair offered up one final thought of his own.

“I want to lobby for the University of Kansas to get in (to the NCAA Tournament),” he said. “Last weekend, we had the sixth-, seventh-, eighth- and ninth-place teams in our league beat two, three, four and five. That’s how balanced we are.”

As kind as Blair’s words were, the fact remained that the Jayhawks now are just 2-6 without leading scorer Carolyn Davis, who was lost for the season in mid-February to an ACL injury. Not surprisingly, Henrickson agreed with Blair and said she believed the Jayhawks belonged in the field.

“It’s our full body of work,” she said. “It’s not like we haven’t done anything.”

They aren't getting in, they have one good win (Oklahoma) on the year along with 2 horrible losses (Alabama, Missouri) and were already on the outside looking in. They are WNIT bound and Bonnie should start packing up her office in the morning for when KU loses in the WNIT.

Even if they win the entire WNIT, Bonnie should still pack her things. The goal was the NCAA. Please Zenger... save the Women's Basketball program.

Agreed. Gill was done after an embarasing loss to KSU. Likewise the same fate should be given to Henrickson after the 0-13 Tigers, playing their last time in AFH walked away with a victory. She's had more than enough time, and let's not use injuries as excuses. The last time I checked basketball is a team sport and all your players should be ready to step up.

kchawk18 nailed it. I don't care what player we lost to injury. The time has come. This program continues to fail the test. So many awful possessions in that game last night. Absolutley brutal. Same story, most of the year. And of course getting swept (again) by k-state, when their program is "down" as compared to some years in the past. Not acceptable. I'm exhausted from caring about this program.

I thought Wisconsin and UT (x2) were good teams.

I'd hate to think of where the men would be without Thomas. Obviously, the men's team is better than the women's, but losing Carolyn was a huge blow to a team that was really doing well on the year.

We just don't have the money to get rid of her right now. She can stay on another year with pretty much the same team back and try for an NCAA Tournament bid again. If she doesn't make it next year, then we will can her.

She actually has one year remaining on her contract. Lew gave her an extension to 2013 after making it to the WNIT Championship back in 2009.

Finish the contract, avoid any controversey and pray for a miracle next season.

People said we didn't have the money to fire Gill, and Z did it somehow. I can only hope he figures out a way to raise the Fire-Bonnie money this year too.

Most of you people are crazy, look at the majority of women's teams and you will see sloppy play, turnovers, missed foul shots, missed layups and bad losses after bad losses, and finally loosing records. Kansas was a mess before Bonnie came and now they have stability, winning records, and post season hopes every year. Compare that to about 70% of the poor women's teams in the NCAA.

Nice to read something nice about KU Women's BB. fanfromafar...I agree with you!

Fanfromafar a mind is a terrible thing to waste! Stay off the crack! Lol

What got me was Bonnie's statement that it was not what we were running, it was how aggressively we were running it. In other words, "it's not my fault; it's my players' fault."

Isn't that always her response....their fault, not that there were no adjustments on her part. Puzzles me that Ku runs the same play over and over no matter what the opponents are throwing at us.

Defense seems to be a big issue with bonnie's team. One player each year is often designated to play defense, while others let their person score at will. You can score 14 or even 20 points, but if you give up twice that amount, you have not done anything for your team. Everyone needs to be held accountable for defense as much as offense.

Ncaa tournament will be tough to make, as Ku lost many games this year they should not have. Mizzou was the biggest dagger .