Like any college football player, former Kansas University running back Jon Cornish often thought about his professional future while still playing for the Jayhawks.

But while many watched KU’s leader for yards in a single season (1,457 in 2006) and attempted to project how he would fare in the NFL, Cornish, a native of New Westminster, British Columbia, had his eye on the Canadian Football League.

“I’ve always known I can be a top running back in this league,” said Cornish during a recent interview with the Associated Press. “I’m not going to lie. That’s the reason why I came up to the CFL rather than being some backup in the NFL. I wanted to be one of the best Canadian players to ever play this game.”

After his stellar 2011 season, some are beginning to wonder if that’s possible. While helping the Calgary Stampeders to an 11-7 record and a berth in the West semifinals, Cornish ran for a career-high 863 yards and added nine touchdowns. He also added 385 receiving yards and caught two touchdown passes, all while serving as the backup for 13 weeks before earning the starting role for the final five weeks of the season.

With the 2012 season set to begin today and Cornish a bigger part of the Stampeders’ plans, offensive coordinator Dave Dickenson said he liked what he had seen from Cornish throughout training camp.

“Jon showed when he’s given the workload, he’s right there with any back in the league,” Dickenson told the AP. “As long as he focuses on the game I think he’ll have a great year. He’s a smart player. This year he’s shown to catch the ball better. He’s obviously a very good runner. He’s got pretty good top-end (speed) and he’s strong. He breaks tackles. He really is the complete package.”

Talk about heart and a recruiting gem, that was/is Jon Cornish. I am not surprised by his success in the pros. I think he was probably the best overall running back that we have had in recent years. I still remember his 79 yd TD run that broke the back of the Huskers and hushed the "Go Big Red" chant in seconds. That game has to rank right up there with the one of the best that I have seen at Memorial Stadium, and I have seen a lot of them. Remember, during that run, he literally stiff armed and then trampled the Husker safety. What joy that brought to the Jyahawk nation. And, best of all, on the other side of the field there was dead silence.

I live and grew up in Missouri. So I have a dislike for the Tigers bordering on hatred. The same goes for KSU. But, NU, I truly hated them and their obnoxious fans, particularly the glee that they protrayed every time they murdered us. I also hated the way they always came to Lawrence and took over the town and the stadium. That victory, in my mind, was one of the sweetest ever. 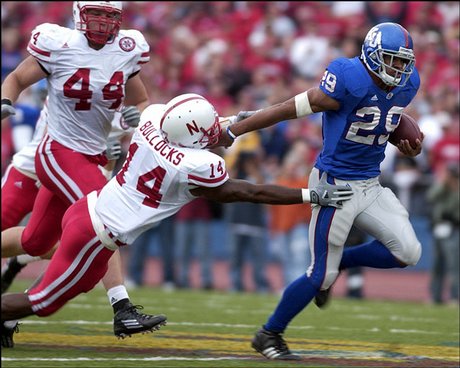 iirc, Jon's grandfather died and JC went back home for funeral and missed a few practice days before that corn game. Plus, the day of the game was his 21st birthday.

Kevin Kane had the late INT return for a 40 yd TD! 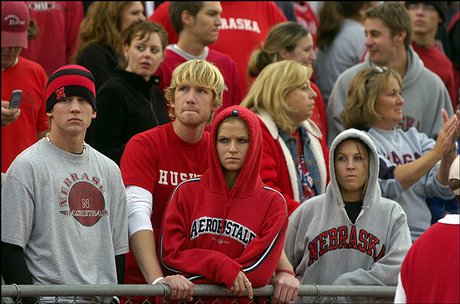 Thanks, Saguaro, for the pics. Brings back great memories!

Sure wish I could watch that game again. Lots of money to be made by the NCAA if they wanted to sell copies of old games.

In 2005 I bought the DVD version produced by corn's athletic dept.

It has their radio crew on audio and the camera is the stationary one in the press box. Not great production value but it is interesting to hear how their crew complimented the Jays that day.

Thanks. Will look into it although it would be much better with Bob doing the commentary.

I agree. Would love to see that one again and hear "Go Big Read" go suddenly silent. I have a picture of the scoreboard. Sure wish I had a tape of that game.

Pretty sure the NCAA doesn't own the rights to the games. Either the sports station like ESPN that did the game or maybe the schools in conjunction with the conference.

This reminds me it's been a long time since we've stormed the field. I wonder if we'll get to do it this year? And, if so, which team? TCU right out of the box would be nice.

Thanks, troutsee, for the memory. I remember it like you do. Totally agree with the second paragraph also. I have many family members who are fans and even a nephew that just graduated from KSU so I can't hate them as much mu and nu.

Thank you LJW for a football article.

I was friends with him on facebook and all he talks about is how ridiculous believing in God is. He creeps me out.

so not believing in God makes him a creep

The anti-Tebow. Thank goodness - it's about time to see an athlete who doesn't think his success his due to the support a mythical creature.

Agree. I could accept a Supreme Being, maybe, if it wasn't all based on a Book crammed with fantacies.

I prefer to stay with facts, which make both Tom Hanks and Cornish right.

I didn't say he was wrong about anything, although I can see where you might take it that way. I just said he doesn't have to be right about everything and meant that whatever his personal views, he is entitled to them and even if I do not agree, that is okay. I still like Tom Hanks (even though he endorsed Obama) and I still appreciate Jon Cornish (even though we do not agree about God). What I was trying to say is that we all change our beliefs over time. Since we cut ourselves so much slack, why don't we do that with others.

good. fellow atheists unite! i get creeped out seeing so many people posting about god and how he controls everything.....

And this is a problem because ...?

Praise God for Jon's success! And praise God for this beautiful day here! I am so thankful to God for everything I have!

And the child in Samolia. Is he also thankful to god.

And don't forget to blame God for everything that goes wrong. Oh wait, I forgot, the all-seeing, all-powerful being is only responsible for the good things in life.

Right on. People may criticize us for not staying on topic but we are not because of someone's statement above about Jon's beliefs. We are entering an era when not only are gays coming out but so are atheists. It is a sad state of affairs when a qualified person in this country cannot run for public office because he is not a christian. I am such a person.

People think it was revolutionary to elect an African American president, and it was.

Electing an Atheist, or heck, a non-Christian denomination president will make electing a black president look tame in comparison.

I, for one, don't think it will happen in my lifetime. We shall see.

Wow, I thought this was a KU sports website...sounds more like a Tom Cruise fan club.