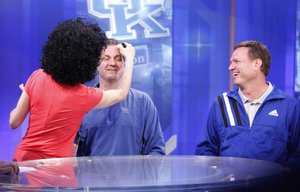 New Orleans — His trademark unibrow might have stolen headlines at times this season, but on Sunday the most talked-about part of Kentucky freshman Anthony Davis’ game was his ability to change games by blocking shots.

Long, lean and blessed with incredible athleticism and precise timing, the 6-foot-10, 220-pound Davis has been the difference-maker for the Wildcats during their run to tonight’s national championship game against Kansas University at 8:23 p.m. in the Superdome. Not only does Davis, the national player of the year, prevent opponents from scoring, but his blocks also spark the Wildcats’ deadly transition game.

While the Wildcats (37-2) have come to rely on Davis’ D, his ability to dominate may provide them with a less-obvious advantage that could be huge in tonight’s match-up with KU shot-blocker Jeff Withey.

“We get the experience of playing against Anthony every day, so we kind of know how to go around him and how you have to shoot the ball to get it over those big guys,” Kentucky point guard Marquis Teague said. “I think that’s gonna help us out a lot.”

Added UK forward Terrence Jones: “It’s a little advantage because it’s nothing new. We’re used to going against it.”

Asked if he or his teammates had picked Davis’ brain for tips on how to attack Withey, Teague said they didn’t need to.

“Not really,” he said. “We just kind of experience it in practice.”

Davis has blocked 180 shots this season, including 23 in five games in the NCAA Tournament. Withey has 136 blocks, including 27 in the tournament. On Sunday, KU coach Bill Self said he thought Withey could be the second-best shot-blocker in the country, paying a compliment to both of tonight’s shot-block artists. Davis agreed.

The technique used by Withey and Davis is similar, but each has subtle nuances to their style of swat. Withey’s is more flailing and relies on the timing he developed on the volleyball court growing up.

“It just came naturally,” he said. “I never worked on it. It just came.”

Like most of the game’s best shot-blockers, Davis blocks shots with a plan. Rather than swatting shot attempts into the fifth row and screaming as he does it, Davis goes for the controlled approach.

“When you block the ball into the crowd, it gives your opponent an extra possession,” he said. “I try to keep the ball in play. Blocking it out of bounds may get the crowd pumped up, but the more important thing is to get my team the ball.”

Davis, who averages 14.4 points and 10.2 rebounds per game, plays a pretty important role on that end of the court as well, one that has increased and improved during the course of the season.

“I didn’t even try to score the ball in the post at the beginning of the season,” he said. “I just wasn’t comfortable. But now I want the ball. I have a lot of confidence, and I know my teammates have confidence in me.”

Kentucky senior Darius Miller said Davis’ jump hook has become almost automatic and is as much a weapon as his shot-blocking now that he’s willing to use it.

“He had a great skill set at the beginning of the season,” Miller said of Davis’ offense. “But I think him being more comfortable now is the main thing.”

Points will be scored, and these two offenses — and the coaches who steer them — figure to find creative ways to neutralize the impact of Davis and Withey.

“At the end of the game, it’s not about how many blocks you have,” Davis said. “It’s how many points are on the scoreboard.”

I'm not entirely sure that Davis is far and away the best shot blocker. He plays 32 minutes to Jeff's 25 minutes. Also, his team averages 9 blocks while KU averages 6 blocks. It's easier to sneak in from the weak side and make a block when the rest of your team is so tall and capable of blocking. Withey is literally our last line of defense.

I do think AD is the best shot blocker, but I think it's pretty close between him and Jeff.

The way to play Davis is put the wood to him. He likes to swoop in and go over people. He is a dainty young thing. Give him a nudge, a push, and a whack but don't get caught fouling. Maybe Wesley is the man for the job.

Again, did anyone notice how young and skinny UK looked versus Slick'deVille?

KU is used to playing against some tough customers.

Now it has to switch gears.

KU has to attack Teague. He is their weak link.Who ever Teague is on, that is the person to go to iron on.

Teague is the all night MUA.