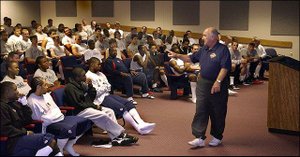 Don F'in Fambrough. Really hard to put into words what he meant to so many people, young and old alike. The quotes are endless, his loyalty to ku is irreplaceable, and his passion and heart for Jayhawk nation will never be matched. Drank to you tonight Coach and poured one out for you as well. Condolences to the family, however smiles will soon be back in remembering the greatest ambassador of KU nation ever to live. R.I.P. coach

I hope the players dedicate not only this season but also their careers as Jayhawks to him. You Freshmen, watch video, listen to audio, pass his legacy down every year. Tonight was a great start as every week will be significantly tougher here on out.

Even though probability says KU will be lucky to win 3 this year, #4 being Missouri would taste pretty damn sweet for the old ball coach.

Kansas University lost a true Legend on Saturday. The start of the game was delayed by severe weather and I'm sure God was trying to decide whether the Jayhawks should really play the game without Coach Fambrough. Knowing Coach, he asked if God would walk with him and discuss the situation and convienced him that he had to let the game be played. I know Coach was in attendance at the game next to his good friend and former player Pat Henderson.We all will miss Coach but please know anytime you enter Memorial Stadium Don will be with you pulling for another Jayhawk victory. Coach will also be asking God to stop letting Missouri Tigers into Heaven, because they don't belong there. Thanks Coach for all the memories. Rock Chalk Jayhawk kick em in the butt KU.

Coach: "Wait, you're gonna let HIM in? He's a God Damned Mizzurrah fan!"

I wish the Fambrough family the best right now. Kansas and Baker families are with you.

Fam was more than a coach to many of us. We'll really miss him. (Keegan, that was well done).

Somewhere in heaven on Saturday, coach Fam turned to the Allmighty and said, "I hope we won't have any trouble up here with the Missourians." God turned to him and with a smile replied, "What Missourians, Don."

Hi, all. My name is Justin (Jay) Fambrough. Thanks for the thoughts and prayers. To the original journalist I'm sorry to say that "Bo" was my granddad's undoing. He lurched toward something while my granddad was walking him and caused my granddad to go head long into a tree causing brain bleeding between the incident and pronouncement of death in a mere 2-3 hours from incident to pronunciation at hospital.

So, though, Bo stayed at his side during the broken hip a year ago, Bo was his undoing. Heard it first here. Stupid untrained dog. Can't blame the dog from being a dog, but he was unruly and untrained despite the hip account. He lived a good long life, though; and I realize all the above cherish his memory. 88 years old is something I don't even expect to obtain.

Don't blame the dog; its just a dog, and they, obviously, don't understand age or frailty always. My uncle is trying to find a new home for Bo. But....Bo, despite his standing at gramps side a year ago, is what caused this. Unnecessary. Heard over the radio two weeks ago that 15-20% of accidents around the house are from animals (getting under yer feet and such). Told my dad that I will not allow them to have anything larger than a rat-dog when they reach their golden years.

go to foxsports.net and look up KU, then "threads" you'll see my original announcement and family pics including "big man", as I called him as a child, as credentials. Bless you all. --J. and sorry, but once more....stupid dog....

I loved coach Fam more than any person that I've never actually met. The guy had fire and passion for this great university. Coaches come and go, but legends are forever.

What number did Coach Fam wear at KU? My Dad thinks it was 22...but want confirmation so we can either get jerseys or have t-shirts made. Great guy and thoughts go out to his family and everyone who came in contact with him. Rock Chalk!!!