The Kansas defense works to prevent a shot on goal from Texas during a corner kick in the first half on Friday, Sept. 30, 2011. 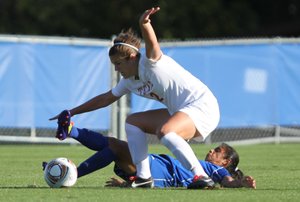 A Caroline Kastor header in the 115th minute sealed the Jayhawks’ third-ever victory over the Longhorns.

Whitney Berry, who assisted on Kastor’s goal, collected assists on all three of KU’s goals and now leads the nation with 11.

Texas tied the game up with goals in the 62nd and 76th minutes before Kastor’s game-winner.

Kansas coach Mark Francis said he was pleased with his team’s play, despite giving up the lead.

“I didn’t think we played particularly well in the second half, but I thought they battled,” Francis said.

Berry said a close victory against a team like Texas gave the team some confidence.

“It sets a standard,” Berry said. “We can do it, so now we have to come out and do it every game.”

The Jayhawks will play host to No. 24 Texas A&M at 1 p.m. Sunday. Former Jayhawks Meghan Miller, Caroline Smith and Holly Gault will be honored before the match during a jersey retirement ceremony.

Great to read that some of the early successes are paying dividends in conference play! Holding the home field against Texas is not just a good win, it can be one more step to the kind of team Jayhawks everywhere can take pride in.

GREAT win for the Jayhawks, but overtime was played in the dark. Very embarrassing for a Div. I soccer program. Let's start a movement to get stadium lights at the Jayhawk Soccer Complex!

Hell yeah. It's great to see we don't suck at everything but basketball! I love it!

Congrats lady hawks, great win! Drink the juice, and come out strong Sunday. The team who scores first Sunday will be the winner. Remember, One player can make the difference for a team, BE THAT PLAYER!