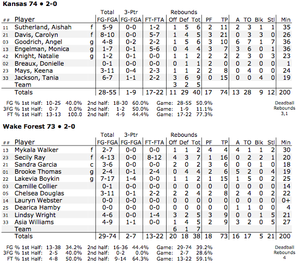 KU junior forward Carolyn Davis led all scorers, finishing with 21 points off of 8-of-10 shooting in 26 minutes. She scored 19 in the second half.

KU utilized its post players early in the first half, relying on Sutherland and Davis for the team’s first six points. The Jayhawks then went on a 9-2 run, capped by a steal and fast-break layup by Goodrich with 12:09 left in the first period.

After a 10-3 run by the Jayhawks, the Demon Deacons whittled KU’s lead to two before Kansas responded. Kansas went on an 8-2 run, kicked off by a layup from Jackson to make the score 33-25 with 1:51 remaining in the first period, marking the Jayhawks’ largest lead of the half.

The Jayhawks, who hit all 13 of their free-throw tries in the first half, jumped to an eight-point lead to start the second half, scoring seven unanswered points — all by Davis — in less than one minute.

But again the Demon Deacons rallied and led with 25 seconds left before Mays won it for KU.

The Jayhawks won despite 28 turnover that led to 37 points.

Kansas will host its BTI Tip-Off Classic this weekend. KU will host Lamar at 7 p.m. Friday, IUPUI at 4 p.m. Saturday and FAU at 1:30 p.m. Sunday.

Spurtability, good. Letting them continually whittle away, not so good. But, very nice road win with composure in the clutch. Way to go, ladies!

Keena, keep it up. Thanks.

Great road win! Though our turnovers kept the margin too close.

Keep the wins coming all the way thru conference

Angel can't turn the ball over like that once conference starts. Still waiting to see a beast game from Aishah against a good team. Just don't know about these ladies... going to stay positive though.