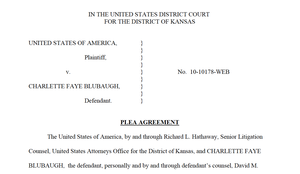 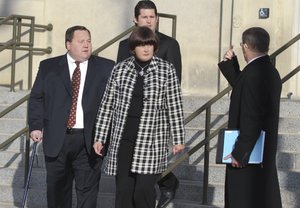 Wichita — Another former ticket manager for Kansas Athletics Inc. has admitted in federal court that she took part in a scheme that converted stolen KU basketball and football tickets into tax-free cash through sales by ticket brokers and others.

Charlette Blubaugh pleaded guilty Thursday morning to one count of conspiracy to commit wire fraud, a crime that carries a potential prison term of 20 years and a $250,000 fine. She now is responsible for paying up to $2 million to the government, to cover her share of ill-gotten gains.

She admitted her guilt and entered into a plea agreement approved during a hearing before U.S. District Judge Wesley Brown, in federal court in Wichita. Sentencing is set for 10 a.m. April 14.

“Charlotte’s happy to get this matter behind her, and she accepts responsibility,” said John Rapp, one of her defense attorneys, after the 47-minute hearing.

Blubaugh is the latest in a string of former colleagues at Kansas Athletics to plead guilty in connection with the scam, which prosecutors say ran from 2005 to 2010. Already having pleaded guilty to conspiracy are:

• Kassie Liebsch, a former systems analyst who took over the top tickets job after Blubaugh left the department.

• Rodney Jones, who had been an assistant athletics director in charge of the Williams Fund.

Still awaiting trial is Ben Kirtland, who is accused of conspiracy. His trial is scheduled to begin March 8 in Wichita.

In February 2010, as federal agents had been investigating the ticket scam, Blubaugh resigned to take a job in the athletics director’s office at the University of Central Oklahoma, telling Kansas Athletics officials that she’d wanted to be closer to family. At the request of Kansas Athletics, she agreed to continue working with the department to help compile information about the ticket scam for investigators.

On Thursday in court, Assistant U.S. Attorney Richard Hathaway documented that Blubaugh actually had been an active participant in the scam. He said KU had hired Blubaugh away from her job in the ticket office at the University of Oklahoma, to become “kind of a consultant” to Kansas Athletics, where she would work her way up to become an assistant athletics director for ticket operations.

During that time, Hathaway said:

• Blubaugh became familiar with Liebsch, Jones and Kirtland and, in 2005, “a conspiracy commenced,” with Blubaugh providing tickets to “various employees” for illegal resale.

• Blubaugh received tickets from the department’s printer, and set aside “a large number” of season tickets — “originally at the request of Ben Kirtland” — for distribution through conspirators.

• Such diversion of tickets escalated to the point that tickets would be moved through her husband, Tom Blubaugh, who worked as a consultant to Kansas Athletics from August 2007 to January 2010, with documents authorizing his $115,000 of total compensation being approved by Kirtland.

• Received proceeds from tickets channeled through Liebsch, Jones and Kirtland. Tickets “moved” through her husband were sold through brokers in Oklahoma, and only the Blubaughs split those proceeds, Hathaway said.

• Failed to report any of the proceeds to the IRS nor to the NCAA through Kansas Athletics, therefore avoiding payment of taxes.

In all, Hathaway said, the conspirators reaped proceeds of more than $2 million from the ticket scam.

Now Charlette Blubaugh and others who have pleaded guilty are responsible for giving up the gains.

“You understand that you’re responsible for a monetary judgment of $2 million?” Judge Brown said.

“You understand?” he repeated.

As part of her deal with prosecutors, she has agreed to provide information about all of her assets since 2005 — part of an examination into her financial situation that could include a lie-detector test.

She also must assist authorities in their investigation and prosecution of the case and “all related conduct.”

Her husband is scheduled to plead guilty to conspiracy at 10 a.m. Friday, also before Judge Brown.

Two other former colleagues, Jason Jeffries and Brandon Simmons, previously had pleaded guilty to failing to disclose the scam to authorities. They and others who already have pleaded guilty also await sentencing.

A previous version of this story incorrectly stated that Charlette Blubaugh pleaded guilty to bank fraud.

Glad (in the only way I can be) that this horrible, ugly chapter in KU history is slowly coming to a close. Hopefully this allows KU to shed some of the peripheral "players" that surround our programs that are poisoning them with greed. As an alum, this is nothing short of shameful.

"Blubaugh would “set aside a large number” of season tickets that she received from the printer."

The above is interesting considering, as a season ticket holder, we are always told that our season tickets are shipped to us directly from the printer. Here it appears that they already had this "large number" set aside in the system and the tickets were shipped back to the ticket office for personal gain. For the select-a-seat years this was going on, it makes you wonder why nobody within the department asked, regarding this seemingly pre-apportioned block of seats, "Hey, why are these seats unavailable?" It makes you want to believe that the block was within the faculty seating, which could be easier to disguise with the simple explanation of, "oh, those are blocked off for faculty selection later..."

It's easier for me to understand how they diverted the post-season tickets than the season tickets. I just can't help but think more people should have caught the season ticket distributions considering the number of checks and balances the system has.

They may have been shipped from the printer, but mine always had a return address on Naismith Drive.

Haha. OMG! You just cant stop posting that Kassie photo can you? It gets me every time.

Oh! Do that one Charlotte photo again. The "Hair Club" one. These bozos crack me up.

I'm sorry, but I don't believe this ordeal is close to over. There is a bigger fish somewhere that they are after. Otherwise, they wouldn't be allowing these people to plead guilty to "help" with the investigation. Hopefully that "fish" will fry soon and the bleeding will stop.

I don't know if that is at all good speculation.

Just shows me how poorly KU is being ran and the sad part is the ones really responsible for hiring these immoral people aren't going to suffer any of the consequences.

Dr. Zenger's first day on the job is Tuesday. I'm sure the staff will remain stable for several months, but wouldn't be surprised if many assistant ADs are asked to leave and other people brought in. And the fact that those accused have entered pleas doesn't mean others won't be added. Leibsch wasn't part of the original indictments.

Why bring in people to replace them? You can't swing a piece of “loaned” exercise equipment without hitting a 6-figure assistant AD. Let them go and save some money – bring back some men’s sports. Heck, bring in hockey. .

LakeShawnee: Would be interested in knowing who told you that tickets were sent directly from the printer? That simply does not make any sense. They have always been packaged and shipped through the mailroom in athletics. Another odd fact....Charlette became the supervisor of the mailroom, staff who worked in mailroom fired, a staff member from the ticket office of utmost integrity was then transferred from ticket office to mailroom. Charlette was then made supervisor of the IT department, 2 staff members left that office (one fired and another I believe was demoted so left on his own accord) and no new ones hired. I just can't help but wonder who put her in charge of those offices at the height of all this mess and why?

+1...thanks for the laugh Lebowski!

This is indeed a shameful chapter in the Kansas athletics department. But the shame is for the perpitrators of the crimes and theirs alone.

Agreed. Gotta portion blame to those that deserve it. I hope that new oversight will help weed out any leftover "roots" from this ugly development.

Charlette's husband was on contract as a consultant PRIOR to her being hired at Kansas. At the beginning of his 'consulting' his invoices were signed off by chief financial officer and Sean Lester, Assoc. AD. At some point (in the exhibits made available there seems to be a couple of yrs missing), Kirkland replaced Lester after Charlette was hired in signing off on those invoices, which were monthly at $5,000/mo and an occasional $1,500 when he was 'working' seating assignments. During Lew's tenure, there always seemed to be a lot of changing of which assoc AD oversaw which program.

And Lew didn't know what was going on!?! He was either stupid, ignorant or totally out of touch and shouldn't have been hired for the job in the first place. My bet is "all of the above." Have you heard about the donor at UCONN wanting his money back? He didn't like the football coach the AD hired. He said that Lew Perkins wouldn't have treated him that way.