Chancellor Bernadette Gray-Little hopes to have a search committee together by the end of next week. She said a KU connection would be nice, but is not required for the new KU athletics director. 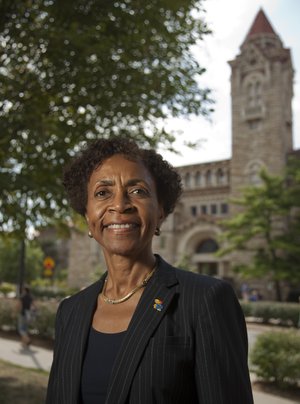 Chancellor Bernadette Gray-Little spoke Wednesday about the search for a new athletics director.

Kansas University’s chancellor will be looking for a new athletics director with experience, integrity and a style that relates well to people.

Speaking publicly for the first time since Lew Perkins’ resignation on Tuesday, Bernadette Gray-Little said the news sparked feedback from people interested in serving on the search committee for Perkins’ replacement.

“The number of inquiries and responses and so on that I’ve gotten in the last 24 hours has dramatically increased over the daily amount last week,” she said. “So I think that the people in this community and more broadly see this as, ‘OK, the search is really starting now.’”

She said she could not comment on circumstances that led to Perkins’ resignation, calling it a personnel matter.

The committee will be composed of people representing a number of different interests, including athletics, academics and alumni supporters.

Perkins won’t be formally involved in the search process, she said, though she anticipated he could make recommendations to the search committee based on his wide network of contacts.

“We’re looking for someone who could strengthen us in terms of facilities, in terms of programs for student-athletes and who would focus on enhancing the quality across the different sports,” Gray-Little said.

Though she has been involved in higher education for decades, this represents the chancellor’s first effort at hiring an athletics director. She’s sought consultation from people who are professionally involved with athletics and people on campus.

“This will be my first time, and I’m trying to get as much input as I can to ensure we get off on the right start,” she said. “We want someone who can build on what we have and take us even further.”

Good. Having someone with no experience at hiring an athletic director means uncorrupted by such a process, and with luck uncorruptable. Go get 'em Gray-Little, I for one trust your judgement WWWAAAAAYYYYY more than 'experienced' minds in corporate athletics. It's a friggin university first, so that makes this a Chancellor's job.

I like our chances now. Just please no more Connecticut cigar-accessoried AD's that might as well have the Jayhawk smoking cigars (not a bad image, actually). If you want more facilities, then do it with alumni support and alumni fund raising. Unfortunately, such fundraising takes 1) an uncorrupted AD, and 2) a strong academic university and not one composed of the more embittered fans on this website who bought in on corporate KUAD, especially those KU B-ball fans who want a winning season even if it means using pseudo-students.

The University needs ultimate say in the list of priorities of the KUAD, so the ath. dpt goes in the direction that makes sense to the University. Don't listen to the people making millions off the KUAD - btw great job hiring a Lawrence police chief just before bailing Lew. Finding people who weild power well is rare, real rare. Good luck Chancellor.

CBG-L, I noticed you and your husband at the UCLA BBall game this past winter. I am sure you noticed the HUGE KU following despite the fact that UCLA would not sell tickets to outsiders. I will not be going back for a football/basketball game this fall, nor will I be hoping over to Vegas for the BBall games because of my disgust over the antics of the athletic department. If you still want me to send a check each year to the WEF and attend your events, then CLEAN YOUR HOUSE….PERIOD.

PS, get rid of the track in Memorial Stadium.

How about this, Chancellor: "[I]n terms of rebuilding the integrity of the athletic department, appropriately implementing and administering internal controls, and regaining the respect and trust of the alumni"?

FreddyinLA- So tell me, just whom does your passive aggressive decision to wipe your hands clean of WEF really hurt?

Is it the past AD (that is one their way out), the same ones that have nothing emotionally invested in the University as a whole and the student athletes that go through it year after year? The ones that look at KU as a business, a stepping stone, to whatever they see themselves doing to finish their professional career before going back to settle down and retire back by their alma maters....

Or is it the fans (like you and I) who have followed KU SPORTS (not just bball) our entire lives that support them through thick and thin?

Something to think about. It must be brought up that if we continue to support the Hawks through thick and thin it will really strengthen our University as a whole and not handicap the opportunity for success in the future because their budget has been cut and the time for facility upgrades has come again, yet we have no $ to do it.