The Kansas bench reacts as Kansas ties the game up at 59 during the team's game against Fordham Sunday afternoon in Allen Fieldhouse. The Jayhawks won in overtime, 81-68. 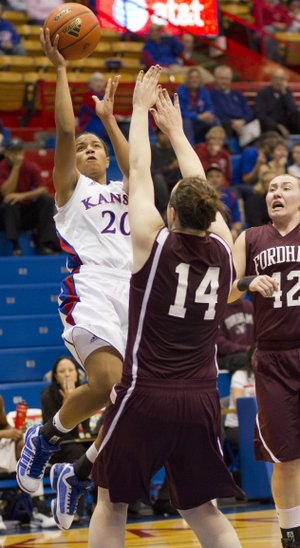 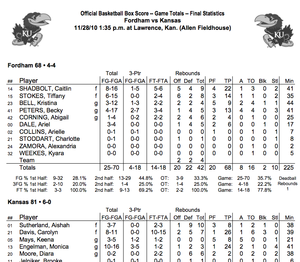 Freshman Keena Mays didn’t need to look to the bench to know she had just committed a huge, potentially season-altering, mistake.

After sophomore Monica Engelman hit a short jumper with seven seconds to go to tie Sunday’s game against Fordham, Mays, thinking the team was still behind, fouled Fordham’s Tiffany Stokes. It was the Jayhawks’ eighth team foul, meaning Stokes would walk the length of the floor for a one-and-one.

Mays, who fouled out on the play, took a seat on the bench while most of her teammates stood. Tears were already forming in her eyes. But Stokes missed the front end of the one-and-one, giving Kansas University’s women’s basketball team another chance.

From there, the Jayhawks (6-0) rolled, scoring 22 points in overtime and winning, 81-68, to conclude the Basketball Travelers, Inc., Tip-Off Classic at Allen Fieldhouse.

“She’s absolutely the happiest person in the building,” Henrickson said. “I’m right behind her, though.”

Mays said all she could remember in the moment was to foul. She was relieved her teammates were able to pull out the victory.

“I had faith in my team,” Mays said. “I was kind of down with what I did, but I knew that we would come through.”

It was surprising the Jayhawks even faced such a stressful situation. They led, 45-27, with 16:12 to play. But then the Rams started attacking the offensive boards, converting several second-chance opportunities.

Henrickson said she was leery of the Rams before the game because of how hard they played and how much toughness they showed.

“When we threw a punch and were up 16, they just kept battling back,” Henrickson said. “We got softer as they got tougher.”

Sophomore Carolyn Davis, the focal point of the Jayhawks’ offense, was more tentative than usual among the packed-in defense. She had four turnovers in the second half, most of them when she was unable to corral an entry pass from the perimeter. When she did collect the pass and maintain possession, she was effective, scoring 26 points.

Henrickson said Davis will have to get used to the crowding in the paint — players will only get bigger and longer in Big 12 conference play.

Junior Aishah Sutherland was named the MVP of the tournament, averaging 13 points and 10.7 rebounds per game for the weekend.

“I actually didn’t expect to win it, but I was focused on staying consistent,” Sutherland said. “Stay consistent and you get rewarded.”

The Jayhawks survived, despite being outrebounded on the offensive glass for the first time all season and scoring just seven points in a 15-minute stretch during the second half. A loss to Fordham (3-3), a team that ended up winless in the tournament, would have stuck out on the Jayhawks’ postseason resume.

Mays’ mistake would have hurt more, too. Her teammates, realizing that they couldn’t let Mays down after being given another chance, re-energized for the overtime period.

“There was energy in that huddle that we hadn’t had the whole game when we got into overtime,” Henrickson said.

Engelman said she almost fainted when she saw that Mays had fouled.

“It was something that we can all learn from and learn what not to do,” Engelman said.

We didn't need the chance of losing like that in Regulation... Mays fouling at the very end was un-necessary and nearly cost the team the game. I hate to say it, but she's been doing way too many freshman mistakes... she needs to learn to be apart of the team...

Other than that, great job girls! Let's get Win #7 on Wednesday!

Pst - "apart" means separate from. Maybe that's what you meant to say, but hopefully you meant "a part".

Yeah, I meant "a part". Everybody makes a typo once in a while, my bad.

I remember last year when McCray called a timeout we didn't have, so anyone can lose track of the game situation. Based on her performance filling in for Goodrich, particularly her big game Saturday, I'm willing to cut Mays some slack. (And you know she'll never make this mistake again.)

Great win Jayhawks! 7 in a row would be great!

So, what has happened to Angel Goodrich? I know she was injured the last two years, but I thought this was supposed to be her year.

Hopefully that scare will act like a splash of cold water in the face to keep the ladies awake.

But, 22 points in overtime (176 point regulation game rate)?!? Holy (expletive deleted)!!! Ladies, you must realize that you have now revealed your true capability.

By the way, congratulations on the win.

Good to see both of the basketball teams at KU starting 6-0. Keep it up ladies!

glad to 'read' the women's wins. would be nicer if we have highlights, too!

Angel had Orthoscopic surgery on her knee. Out 2 weeks.

Coming up with a 13 point win in overtime, that's pretty impressive! Way to pull it out.

The Lady Hawks are 6-0 and only ranked 35th per the current poll...that just sucks. Keep up the intensity ladies and make America recognize you!!!

They haven't really played anyone yet other than Wisconsin (4-5), and have struggled a little bit against mediocre teams, i.e.Fordham. Michigan, on the road, may be their first challenge, but it's a pretty cushy schedule until BIG 12 action starts.

Actually, the Women's Poll is a reflection from before the tournament. Their polls are released every Tuesday. We'll find out how far up (if any) they move tomorrow.

Anyone else think this headline sounds sarcastic?

not me. you're just too negative or sensitive. what do you expect? it's KU women's bball. we're not UConn or the Vols. anything can happen to this team. but i wish them luck in each game, because they need it... until coach Bonnie proves that she can bring this team to a higher level (ranked every season).