Kansas University head coach Bonnie Henrickson talks to her team during a timeout in their game against Memphis Saturday, Nov. 27, 2010 at Allen Fieldhouse. The Jayhawks were too much for the Tigers, beating them 90-58. 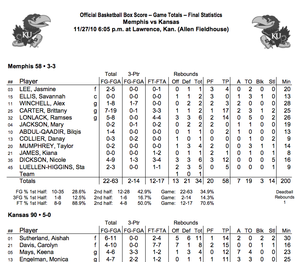 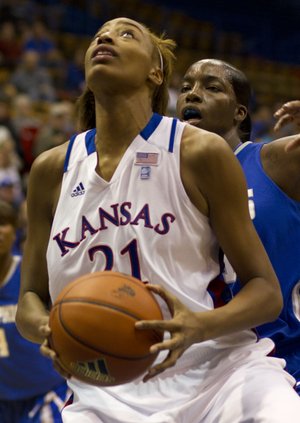 With Kansas University sophomore point guard Angel Goodrich out two to three weeks after having a knee scoped, a lot of responsibility falls on the shoulders of freshman guard Keena Mays.

After some early difficulty handling Memphis’ full-court pressure Saturday night at Allen Fieldhouse, Mays slowed down in the halfcourt and helped KU’s women’s basketball team cruise to a 90-58 victory. It was the second game of the Basketball Travelers Tip-Off Classic for the Jayhawks (5-0).

“But I told her, ‘You can go 100 miles an hour to halfcourt, and then past halfcourt, you need to slow it down to 70 so you can make good decisions,’” Henrickson said.

Mays, who finished with 12 points, seven assists and four turnovers, said she knew she was going to have to penetrate and get to the rim against the Tigers’ aggressive defense. She also said that being a freshman shouldn’t affect how she leads from the point-guard position.

“That’s not really an excuse,” Mays said. “I have to pick up for Angel and just pick up where she left off. Just do everything she did plus my role.”

Sutherland said that getting extra possessions is the main reason the team attacks the glass so hard.

Henrickson has been emphasizing the importance of getting loose balls and offensive rebounds.

“The game is about possessions,” Henrickson said. “Whether you’re shooting the ball well or not, you need more possessions.”

After a poor-shooting effort Friday against North Dakota State, the Jayhawks shot 47.1 percent on Saturday and 57.1 percent from behind the three-point line. Henrickson said the team was getting good scoring opportunities Friday but ended up taking out-of-rhythm, off-balanced shots.

The Jayhawks got similar opportunities against Memphis (3-3) but converted more regularly.

Engelman said that it’s a lot easier to score and play aggressively with confidence.

“I know individually, I was low on the confidence side,” Engelman said. “I think that’s where I struggled the most — in between my ears.”

Engelman finished 4-for-7 from the field, 2-for-2 on three-pointers, after a 1-for-9 performance Friday.

Mays, who was 5-for-21 against North Dakota State, realized that she needed to settle down and take good shots in rhythm. She finished 4-of-6 from the field and 3-for-3 on three-pointers.

The Jayhawks will conclude the BTI Tip-Off Classic with a matchup against Fordham (4-3) at 1:30 p.m. today at Allen Fieldhouse.

I love it. Keep the W's coming.

Box score? Where is it?

Doesn't look like Angel's knees are going to hold up. It's a shame. She's fun to watch.